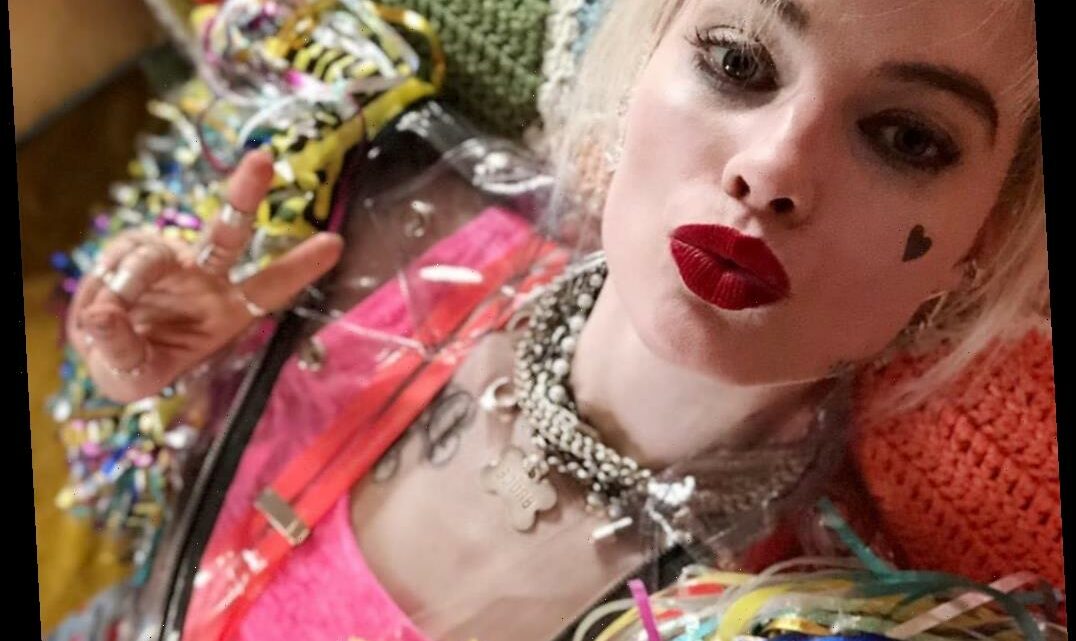 She’s back! The Suicide Squad actress shared a smoochy-selfie to Instagram of her in full costume on the set of her Harley Quinn standalone film, Birds of Prey.

In the snap, Robbie is decked out in a colorful confetti pullover and poses in Harley’s distinctive white makeup, with a bold red lip and a black heart on her right cheekbone. “Miss me? 💋HQ,” Robbie captioned the shot, leading fans to flood her comments with excitement ahead of the film’s February 2020 release. 2019’s Dreamland sees Robbie as a disarmingly beautiful bank robber on the run from the FBI. Set in the 1930s in the aftermath of the Dust Bowl, the film features Robbie serving up vintage vibes with cropped curly hair, feminine dresses and classic oxfords.

Sharon Tate, Once Upon a Time … in Hollywood Robbie stole the spotlight in Quentin Tarantino’s star-studded film with her turn as ’60s star Sharon Tate, who was murdered by members of the Manson Family cult. In the film and on the red carpet press circuit, Robbie channeled the fashion icon with middle parts, soft eye makeup and mod minis. In one of her most dramatic transformations to date, the Australian blonde beauty is completely unrecognizable as Queen Elizabeth I in the period drama Mary Queen of Scots. Her embodiment of the royal earned her a nomination for a Screen Actors Guild Award for outstanding performance by a female actor in a supporting role.

To get into character, Robbie had to wear layers of prosthetics and makeup in order to resemble Elizabeth, who often sported heavy white makeup to cover the scars on her face from a horrible bout of small pox. Robbie revealed that her transformation was so complete that her costars were often intimidated by her when she was in costume.

“I’d say, ‘Hey, how’s your weekend?’ But they wouldn’t even get close to me,” the actress recalled of trying to chat with people while covered with scars and the thick white makeup. “It was very alienating. And I felt very lonely. It was an interesting social experiment.” In the 2018 neo-noir thriller Terminal, Robbie plays Annie, a femme fatale hitwoman who works the nightshift as a waitress. While she’s mostly recognizable as her blonde self throughout the film, she dons a variety of disguises to get close to her targets — from a nurse’s uniform (complete with a hairnet) to a black, blunt-banged wig. In the 2017 British biographical drama Goodbye Christopher Robin, Robbie plays the wife of author AA Milne, whose bedtime stories about their son Christopher Robin’s stuffed animals became the basis for Winnie-the-Pooh. Set in the interim between World War I and II, the film mostly sees Robbie in traditional fashion of the ’20s, with soft blonde waves and long shift dresses. For the role that earned her an Academy Award nomination for Best Actress — in addition to nods at the Golden Globes, SAG Awards and others — Robbie required more than cheap hair dye to transform into infamous Olympic figure skater Tonya Harding. The actress underwent five months of intense training on the ice in order for her to skate similarly, and ultimately blew director Craig Gillespe away with her diligence and natural talent.

“The amount of stuff that she could do was amazing. For that end sequence when she comes out on the ice, those 30 or 40 seconds with all those turns and spins, that’s all Margot. She managed to be in it so much more than I expected,” he tells PEOPLE.

While the makeup helped Robbie get into character, she explained that her transformation was more than just skin deep. “Our makeup artist only used makeup that she bought really cheap from a strip mall, only makeup that Tonya could have worn. And the hair was dyed with only cheap hair dye, and she permed it time and time again. For me it wasn’t about replicating the looks, it was embodying the spirit of Tonya.” For her turn as a super villain, Robbie underwent rigirous training in order to rock her character’s signature booty shorts. For three weeks, the actress met with trainer Andie Hecker for three hours a day most days of the week while the movie was shooting.

In addition to amping up her workout routine, Robbie’s golden glow and blonde locks were masked beneath white face powder, smudged eyeshadow and red and blue dip-dyed pigtails to complete the look.

Jane Clayton, The Legend of Tarzan In this 2016 reimagining of the legendary tale, Robbie plays the wife of Tarzan, also known as John Clayton III, after the two have left Africa and settled in Victorian England. For the role, Robbie traded in her golden tresses for strawberry blonde curls. A departure from the roles that tend to play up her sexuality and feminine looks, this 2016 film sees the actress as a war correspondent in Afghanistan, mostly clad in cargo pants and half-buttoned button-down shirts or a bulletproof vest. A love triangle with Chris Pine and Chiwetel Ejiofor? Don’t mind if we do! In this 2015 post-apocalyptic drama, the two men compete for the affection of the last woman left on earth (Robbie’s Ann) after a disaster wipes out most of civilization. Robbie as a brunette toting a rifle in full hunting gear — we’re talking flanel, camo and a trucker hat — is truly something that needs to be seen to be believed. Set in Nazi-occupied France during World War II, Suite Française showcases an unrecognizable Robbie as a village woman with dark, permed curls — who happesn to be sleeping with the enemy. For the role that launched her career, Robbie amped up her blonde bombshell looks to play the trophy wife of Leonardo DiCaprio’s finance tycoon Jordan Belfort. And while there wasn’t much beyond hair extensions to add in order to enhance her natural beauty, Robbie did have to remove quite a bit for the role.

Robbie revealed to Vanity Fair that the film’s infamous sex scene between her and DiCaprio was the first time she fully stripped down on screen.

“I hadn’t done a proper sex scene before,” she says. “I’d done scenes where it’s leading into sex or sex had just finished, but I hadn’t done a start-to-finish sex scene like I did in Wolf. That was my first.” As a flight attendant in this ABC series set in the 1960s, Robbie manages to make an airline uniform and red bouffant look impossibly chic. Robbie’s come a long way in her career since her debut role as Tristan, a teen who stumbles upon a serial killer with her friends and is subsequently targeted in this 2009 Aussie thriller. Seeing a teenage Robbie with choppy black side bangs and a spray tan — even if it was just for a role — gives us all hope that we could blossom into the bombshell leading lady and hit Hollywood producer that she’s established herself as over the years.