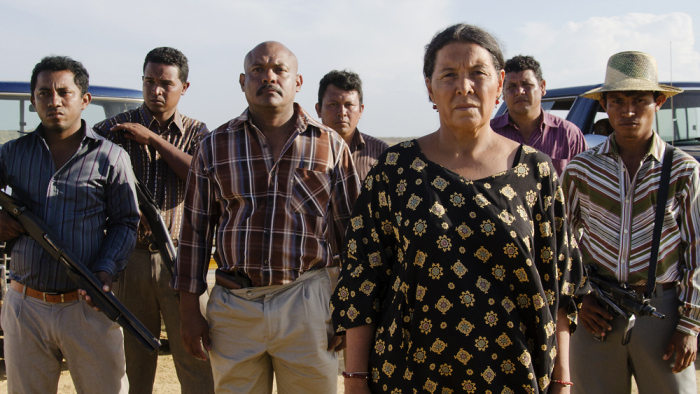 Practically everything audiences know about the Colombian drug trade they learned from movies, U.S. news reports or shows like Netflix’s popular “Narcos” — in which cocaine kingpin Pablo Escobar is played by a Brazilian actor who speaks Spanish with a ridiculously thick Portuguese accent.

“The story of the foreign misrepresentation of Colombia goes way back. I think the most offensive example is the Brad Pitt movie ‘Mr. & Mrs. Smith,’ which presents Bogotá — which is a very big, high-altitude city — as a tropical village,” says Colombian director Ciro Guerra. “You see similar problems in films like ‘Romancing the Stone’ and ‘Clear and Present Danger,’ which are usually shot in Mexico.”

So, when it came to identifying the bad guys in Colombian drug-running epic “Birds of Passage,” Guerra and co-director Cristina Gallego don’t blame Escobar, but a trio of American Peace Corps workers who saw an opportunity to smuggle marijuana in the 1970s. And the victims? Not the thousands of American drug users desperate to buy the stuff in the States, but the local community of indigenous Wayúu people in northern Colombia whose ancient values and traditions were devastated by what came to be known as the “Bonanza Marimbera.”

“When you look at things from this perspective, everything becomes different,” Guerra explains. “At the height of the Bonanza, 80% of the peasants in the region were working in the marijuana business. It really devoured everything. And yet, for Colombia, this is a story that has never been told in the cinema.”

For Guerra and Gallego (who served as a producer and key creative contributor on Guerra’s earlier Oscar-nominated film, “Embrace of the Serpent”), their job was to approach the tragedy of the Colombian drug trade from a different angle. According to Gallego, “This history is kind of a metaphor for us as a country. We’re represented as narcotraffickers and terrorists, not as a society that was exploited for the amusement of the world.”

Although Gallego is quick to clarify, “We are not indigenists, or anthropologists or ethnographers,” she and Guerra have always made it a point to work with non-professional actors, incorporating their cultural experience into the stories they portray. “When we started to make ‘Embrace,’ we wanted to talk about this encounter [between European explorers and an Amazonian shaman], since this kind of story has always been told from the p.o.v. of the explorer,” Gallego says.

A decade earlier, she and Guerra had made a film in the north Colombian desert called “The Wind Journeys,” and while there, they began to hear stories of the Marimbera. It was then that Gallego got the idea for “Birds of Passage,” which she saw as a gangster film, set within this unique society of matrilineal clans and mystical customs — which include a belief in omens, dreams and communication with the dead.

Just before they started making “Embrace,” the Colombian government passed an aggressive tax incentive for bigger productions, making it possible for the duo to move forward on their ambitious plan for “Birds of Passage.” “It felt right to have a female co-director and a female vision to give a twist to the genre,” Guerra says.

In casting the film, they assembled a mix of inexperienced local actors — whose history can be seen written on their faces — with big-city stage and TV stars who had roots in the region (and who were required to learn their lines phonetically). “It’s a very interesting process because the non-actors sort of feed the professional actors with their life story and the culture, and the professional actors share with them the technique, so it’s a process in which they are both learning and growing,” he explains.

A fair number of these locals had lived through the era in question. Among them, “The Wind Journeys” actor Juan Bautista Martínez had transported marijuana during the Bonanza and now served as one of their key sources. The character of Ursula, the tribal matriarch, was modeled on Martínez’s real-life wife, and many scenes were drawn from his personal experience.

The co-directors also paid careful attention to Wayúu rituals, such as the year-long confinement before a woman is eligible to marry, which inspired the film’s opening setpiece. The Wayúu have a very rich mythology regarding many species of birds, as well as an extremely personal and profound understanding of color, which is also reflected in the film, where the fabrics, artifacts and music were all created by the Wayúu.

“They are not just acting, but 30% of the crew was from the community,” Guerra explains. “It wasn’t a case of bringing an outside vision to the Wayúu people, but of developing our vision together, and really trying to understand what part of the story was important for them to share.”

Party invite by girl, 15, sparks fears of a RIOT in small Dutch town