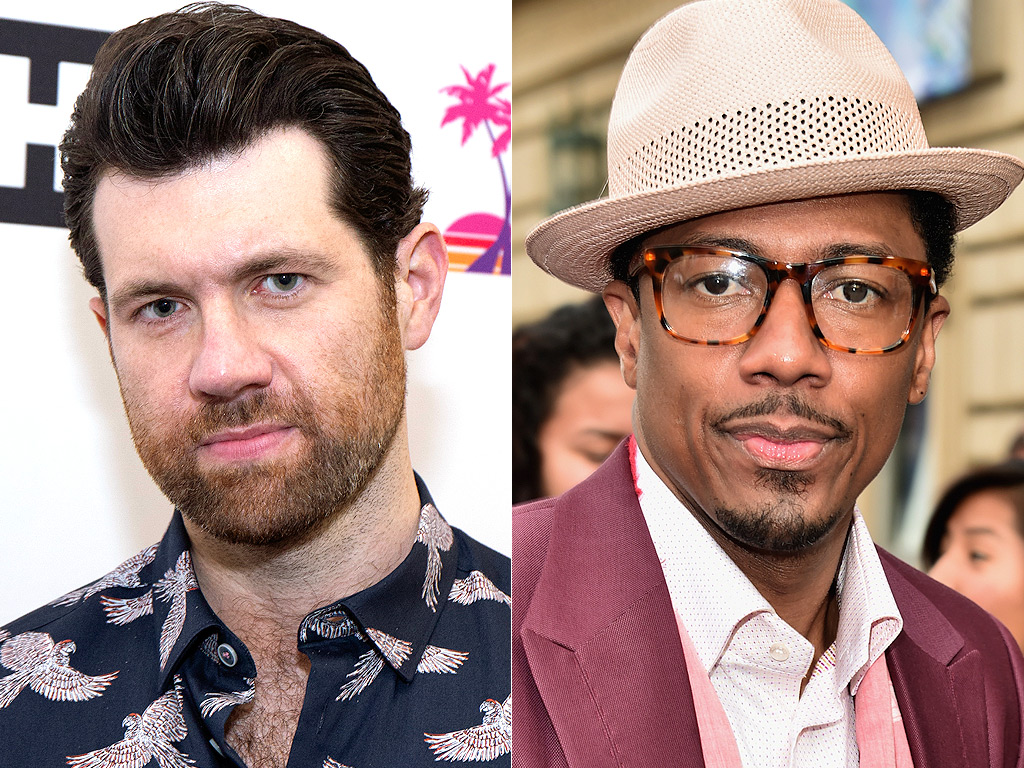 The American Horror Story actor, 40, shared his views on the tweets in a statement he shared on Sunday, writing, “People have been tweeting me for my thoughts on Nick Cannon’s tweets. I obviously can’t speak for the entire LGBTQ community. But here’s my personal opinion for those who care, which is probably not that many people. #SundayFunday.”

In his statement, Eichner said he found Cannon’s point of bringing up past controversial tweets by female comedians and the use of the f-word by comedians such as Sarah Silverman, Amy Schumer and Chelsea Handler “a compelling one.”

“I obviously do not and cannot speak for the entire LGBT community (obviously). But here’s my personal opinion: Just don’t use the word. It’s as simple as that,” Eichner wrote. “There are so many other words to use. Now, because I am a grown up and not a child, I do take context, nuance and *intention* into consideration.”

He continued, “I think these are comedians who felt they can use that term because they have very large, dedicated gay male followings, myself included. They feel like they’re ‘one of us.’ So I think in some of these cases it was being used with what is *intended* as some sort of endearing, if irreverent, affection.”

Eichner also referenced a past homophobic joke by Kevin Hart, who stepped down from hosting the Academy Awards, from his 2010 standup routing Seriously Funny.

“And I do think there is a sizable difference between using this one word in this type of context and saying with some amount of gravity and truth that you’re going to smash a dollhouse over your child’s head if they exhibit stereotypically gay behavior,” the actor wrote. “HOWEVER – that is an explanation, not an excuse.”

“I agree that the best thing to do is to just not use the damn word! As a gay man, unless it’s perhaps a gay friend of mine saying it to me at a LIVELY BRUNCH, I don’t like hearing it,” he explained. “Even when I know it’s coming from an ally – and certainly when I know that it isn’t. It’s not a fun word for us to hear at this point. We’ve come too far. So maybe let’s just drop it. I’m not into censorship and I know some gay men may disagree but, like I said, there are so many other words to use.”

Eichner wrote that he, among others, have also shared things on social media that “we deeply regret.”

“Finally, I want to say this. I don’t like that word but I also don’t like ‘cancellation’ culture. Like I said in my first tweet about the Kevin Hart situation, many of us, myself included, have made jokes/tweets in the past that we deeply regret,” he tweeted. “Kevin decided to quit on his own volition. He had his reasons and that’s obviously his prerogative. But I’m not into people being permanently ‘cancelled’ over something like this. To me, ‘cancellation’ is childish.”

He added, “I’m into conversation, not cancellation. I’m into owning up to past mistakes, acknowledging blindspots and hurtful remarks, talking through it, discussing it, learning, moving past it and making progress together. And with that I would like to announce my candidacy for the President of the United States. Just kidding. Thanks for reading this if you’ve made it this far. To be clear – I don’t consider myself any type of moral authority whatsoever. This is just my personal take on it, since I’m gay and people were curious what I thought. Happy Holidays to all. Peace on Earth.”

Silverman, 48, responded to Cannon’s tweets by retweeting a thread from an LGBT advocate that explained why her tweets were not homophobic.

Speaking about her past mistakes, Silverman recently told The Guardian, “All I can do is learn from it, be changed forever by it, and do what I can to make it right going forward.”

RELATED VIDEO: With Kevin Hart Out, Who Could (and Wants) to Host Oscars — From Tiffany Haddish to The Rock

“Certainly stuff that I did 10 or 15 years ago, I cringe at now,” she continued, adding that she now sees the jokes “very differently.”

Reps for Schumer, Silverman and Handler did not immediately respond to PEOPLE’s requests for comment about Cannon’s tweets.

Cannon was supportive of Hart when the Night School actor shared he wouldn’t be apologizing for his remarks because he already “addressed this several times.”

“We with you regardless!!!” Cannon wrote, commenting on Hart’s Instagram video. “You know how we feel about people trying to control us anyway!!”

Hart did eventually go on to apologize.

“I have made the choice to step down from hosting this year’s Oscar’s….this is because I do not want to be a distraction on a night that should be celebrated by so many amazing talented artists. I sincerely apologize to the LGBTQ community for my insensitive words from my past,” he tweeted shortly after he shared he would be stepping down from hosting the Oscars.

“I’m sorry that I hurt people.. I am evolving and want to continue to do so. My goal is to bring people together not tear us apart,” Hart added. “Much love & appreciation to the Academy. I hope we can meet again.”

Teresa Giudice Reveals How She Will Be Spending Her Christmas