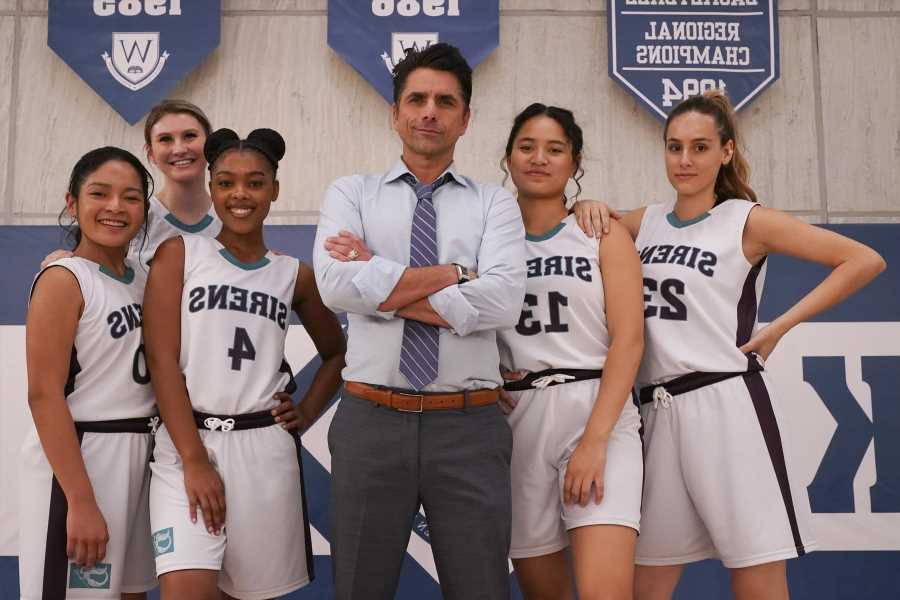 Marvyn Korn is no Ted Lasso. But he might have to be in order to thrive, both as a coach and as the main character of a new streaming TV show.

In Disney+’s new sports dramedy Big Shot, John Stamos plays Marvyn, a legendary — and legendarily hot-tempered — men’s basketball coach whose antics make him unemployable at the college level. The sport is all he cares about, so he reluctantly takes a job coaching a girls team at a California prep school. He is intense and unyielding from the start, ordering one of his players to lose five pounds and blowing a whistle in the face of another after she complains that whistles “can be triggering.”

“You are profoundly unlikable,” his assistant Holly (Jessalyn Gilsig) tells him. “You know that, right?”

'We Are Better People Because of John Lennon'

There’s a long tradition of hard-ass coaches like Marvyn in underdog sports stories, perhaps most famously Gene Hackman’s Norman Dale in Hoosiers, who also wound up rubbing people the wrong way when a violent outburst got him demoted from college athletics to high school. The hard-ass usually softens over the course of the story (“I love you guys,” Dale tells his players before the title game), and that’s clearly the game that Big Shot is playing with Marvyn. He has to learn not only to relate to his new, younger, female players, but to the teenage daughter, Emma (Sophia Mitri Schloss), who’s become a virtual stranger to him until his coaching exile gives them an opportunity to reconnect.

It’s a familiar character arc being deployed by the show’s producers, Emmy-winning writing juggernaut David E. Kelley(*) and comedy veteran Dean Lorey (Arrested Development, Harley Quinn). But Big Shot, while perfectly amiable in most respects, often fails to sweat the details in the way that a tough coach would demand.

(*) It gets lost in the shuffle of his earlier Ally McBeal/The Practice peak, but Kelley wrote the 1999 sports movie Mystery, Alaska, about a small-town hockey team playing an exhibition game against the New York Rangers. Though Nicole Kidman and friends now have him on speed dial post-Big Little Lies, you get the sense that Kelley would happily just tell fictional sports stories if he could get away with it.

Between Kelley, Lorey, and comedian Brad Garrett, who originally came up with the idea, Big Shot features an odd mix of collaborators, even if Kelley and Lorey previously worked together on CBS’ failed Robin Williams comedy The Crazy Ones. The result of their union here is a mix of light comedy and lighter drama, where individual episodes run a little over 40 minutes apiece (i.e., about the length, minus commercials, of the many broadcast network dramas Kelley has been writing since the mid-Eighties), and the overall feel is of a rough draft that they didn’t have time to fully finish(*). The story beats are rushed, and the characters — including Yvette Nicole Brown as Sherilyn, the school’s slightly disapproving principal; Nell Verlaque as star guard Louise; and Tiana Le as Destiny, the player Marvyn fat-shames in that first practice — are very broad types, given what life they have by the actors playing them.

(*) The show even opens with yet another “24 hours earlier…” teaser, and a particularly uninspired one, even by the standards of that wildly overused device: It’s just Marvyn pulling up to the high school looking vaguely uncomfortable, then flashing back to the conversation he had with his agent (Adam Arkin, who once upon a time starred in Kelley’s Chicago Hope) about how no one else will hire him right now. Like most of Big Shot, it plays as if someone just filmed the outline.

Marvyn frequently scolds his players for assuming they’ll be able to get by on Louise’s abundant talent, rather than putting in the work to be a complete team. But Big Shot is similarly guilty of assuming the clichés of the genre will work the way they always do, and that the appeal of forever TV star Stamos will paper over the rest. The former proves more correct than the latter: Even at its sloppiest, the show knows which beats to hit, and when, regarding the players’ relationships with both Marvyn and each other. And the girls are all well cast enough to make you root for them.

Stamos is the tougher fit. He’s done drama before (he filled the Clooney slot in the final seasons of ER, for instance), but usually as nice guys not too far removed from Uncle Jesse on Full House. That seems to be where this role is eventually headed, but first he has to play a far more abrasive Marvyn, and his heart doesn’t seem in it. He’s neither as cold nor as tough as the role demands at this stage, seemingly only comfortable once Marvyn starts making an effort to connect with his daughter and with players like Destiny. It’s not that the evolution is supposed to be a surprise, but when you cast Stamos to play a younger, handsomer Bobby Knight, you’re essentially sacrificing the growth part of the story that’s supposed to make the later beats more potent. And the series’ gentle comedy needs someone more fundamentally caustic than Stamos is. Marvyn says and does obnoxious things, but he never seems to mean them, and that makes a big difference.

Which brings us to Ted Lasso. The Apple TV+ comedy was one of the biggest word-of-mouth phenomenons of quarantine, with its tale of an out-of-his-element coach getting by through nearly superhuman kindness. Its deviation from the usual fictional sports story tropes — an inversion, really, since so often the hero starts out gruff and is redeemed by his association with others — turned out to be exactly the tonic so many people needed during the worst year of our lives. That show also came along at a moment when toxic bosses, particularly in Hollywood, were being publicly called out for abusive behavior that had been forever tolerated as just the way things are. So Ted’s radiating decency felt refreshing not only for the genre, but for life in general.

Real-life sports still has no lack of arrogant martinets who may as well have “my way or the highway” tattooed on their foreheads. There’s a version of the story Big Shot is telling that would work quite well if Marvyn were more convincingly one of those guys. But since both the star and the show seem so eager to get to the redemption phase of things, perhaps they should have figured out a way to start there.

One of Marvyn’s players suggests, “I think he wants to be a good person. Maybe he just doesn’t know how.” With Big Shot, it’s more the opposite problem: It doesn’t really know how to make Marvyn bad.