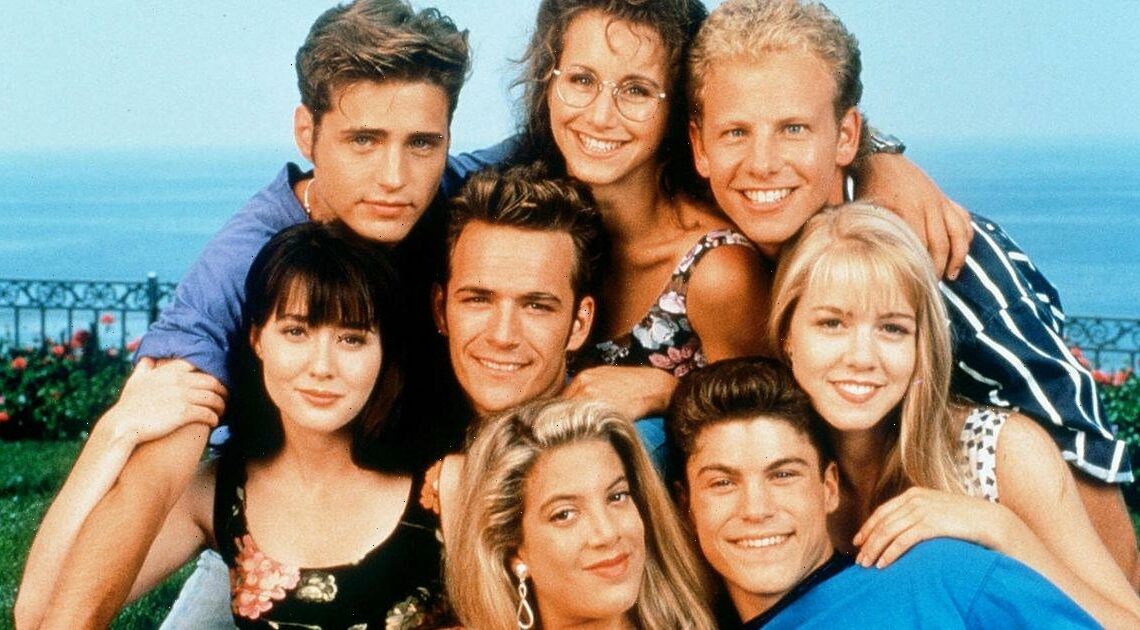 Beverly Hills, 90210 was an absolute classic from the 90s – and made household names of the likes of Shannen Doherty, Tori Spelling, Luke Perry and Jennie Garth.

One of the first teen ensemble dramas to really kickstart the genre, fans were hooked on the lives of the rich and famous kids growing up and having plenty of drama in one of Los Angeles’ most exclusive zip codes.

And while the show was about a core group of friends and the trials and tribulations that come along with growing up, many viewers were more concerned with the central love triangle.

It’s still a question to this day over whether Dylan McKay (played by Perry) should have ended up with Kelly Taylor (Garth) or Brenda Walsh (Doherty), and was even revisited by the characters on the series’ reboot 90210.

The show will remain a classic in the archives for generations to come, but what are the core cast doing now, and where have their careers taken them?

The star battled in intensive care following a massive ischemic stroke, but the injuries were too great and after he suffered a second stroke only days later, his family decided to take him off life support.

Perry died aged 52 with his close family around him, leaving a devastating hole in his other major teen series Riverdale, which he also starred in.

In a heart-wrenching move to try and pay tribute to the star, who is best known for roles back in the 90s such as the original Buffy the Vampire Slayer film, executive producers brought in Doherty as a brand new Riverdale character to say goodbye.

In scenes that were raw and clearly off-script, the characters sobbed and hugged as Doherty paid tribute to her longtime friend and former co-star.

Before his untimely death, Perry also featured in a small role in the Quentin Tarantino epic Once Upon a Time… In Hollywood alongside Leonardo DiCaprio and Brad Pitt.

The actor is survived by his two children Sophie Perry and Jack Perry – who is a professional wrestler also known as Jungle Boy.

After starting out on Little House on the Prairie in the early 80s, Shannen Doherty, 50, continued to carve out her career in TV into the 2000s.

After a successful run on Beverly Hills, 90210, she bagged one of the lead roles on witchy fan-favourite Charmed in the late 90s, but reported drama behind the scenes with co-star Alyssa Milano led to her character Prue being killed off prematurely in season three.

The actress made various appearances on TV films and other series before joining the cast of the TV adaptation of Heathers in 2019.

She also returned in the revamped 90210 for a stint.

In her personal life, Doherty has shared her ongoing battle with breast cancer publicly over the last several years.

She had hoped her experiences could help other women to get checked earlier and learn to recognise the symptoms of the deadly disease.

The actress told her fans the heartbreaking news that the disease had returned in an emotional interview last year.

Doherty is now living with stage four cancer, but insisted she’s still got “a lot of life left in me”.

The star is close friends with Sarah Michelle Gellar, and the duo regularly shared hilarious videos and posts on their social media.

Jennie Garth was the queen bee of Beverly Hills for the duration of the original show’s run.

Playing rich princess Kelly Taylor, she was best friends with Donna and Brenda, and in her own love triangle with Brandon and Dylan.

The 49-year-old star then returned to the reboot as a main cast member, and fans were delighted to see what the character was up to 20 years later.

In between and in the years since, Garth has starred in shows What I Like About You and Mystery Girls.

She also competed on the US’s Strictly Come Dancing spin-off Dancing With The Stars in 2007.

Outside of TV, Garth has been married three times, most notably to Twilight star Peter Facinelli for 12 years, whom she shares three children with.

The actress is now married to Dave Abrams.

Tori Spelling has an incredible legacy behind her name – being the daughter of legendary US TV producer Aaron Spelling.

And she is also best known for her role as Donna Martin on Beverly Hills, 90210 – a character who truly made the series with her hilarious one-liners and solid friendship to Kelly and Brenda.

The 47-year-old actress has since appeared in a number of small TV roles.

She has been married twice, and now focuses on her enormous brood of five children with husband Dean McDermott.

Tori was at the centre of an inheritance scandal when her father died because she and her brother received a small amount of his enormous multi-million dollar fortune according to reports that put their mother Candy in charge of the will.

Jason Priestley played the other heartthrob on the show – Brandon Walsh.

The good-hearted, always brooding Brandon left the famous zip code at the beginning of the ninth seasons when he chose to go to travelling and focus on his career in journalism.

Since his career-defining role, Priestley, 51, has also had a critically-acclaimed place on Canadian comedy-drama series Private Eyes.

He also returned for the six-episode reboot of the original series in 2019.

The star married Naomi Lowde-Priestley in 2005, and the couple share two children together.

Ian Ziering was the typical high school jock in the show and was obsessed with women, often treating them badly.

His character Steve Sanders struggled with issues over the course of the series, which he remained on until the very end.

Ziering also took part in Dancing With The Stars in 2007, and has appeared on a number of other reality TV shows – including the American version of The Apprentice.

The actor is married to Erin Ludwig and the couple have two daughters.

Brian Austin Green is perhaps one of the most famous members of the former cast now, as he married Hollywood beauty Megan Fox.

The actor played the geeky David Silver on the show – a trait that no one could imagine now – and he has since had scene-stealing turns on the likes of Desperate Housewives and Anger Management.

He and Megan ended their marriage last year, and she has since moved on with rapper Machine Gun Kelly.

Green has four children – Noah, Bodhi and Journey with Fox and a son called Kassius with his ex Vanessa Marcil.