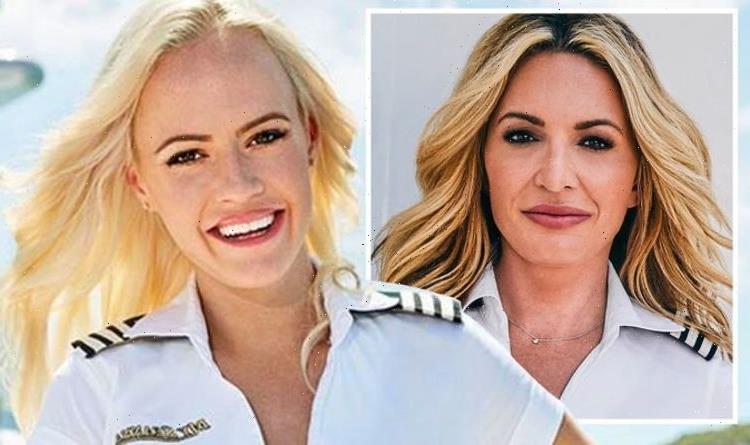 Kate, 38, appeared in six of the eight seasons of Below Deck before making her departure from the franchise last year. The former star of the Bravo and Hayu smash hit was a senior member of the crew but was often seen clashing with several of her co-stars on board the luxury yacht, making her one of the standout characters on the show. With Heather joining the cast as the new Chief Stew, she will have her hands full getting to grips with the running of proceedings and in the lead up to season nine’s premiere in October, Kate has revealed how she thinks the newcomer should handle the reaction she will receive from the public on Twitter.

Heather will have a lot of her hands as she tries to juggle heading up the interior of the vessel, My Seanna, whilst maintaining a five-star service.

It’s been hinted ahead of the season nine premiere the newcomer will be giving some direct and stern orders to her fellow crew members.

This could see quite the reaction on social media and Kate has told the new Chief Stew she needs to not “freak out” when it comes to reading things about herself online.

“I think the only advice I have for her, while it’s airing is to not get too freaked out from week to week.

“Like social media people are disagreeing with why you made decisions. Because honestly, in the end, nobody really remembers anything anyways.”

The former star of the show thinks she will be able to handle the pressure, however, and praised the newcomer.

Kate said: “I absolutely love her. I feel like she is the one that will take the franchise for years to come. She’s amazing.

“She’s friendly, she’s funny. [And] she’s sweet. And I’m looking forward to seeing her show them all how it’s done.”

On tackling the challenges which will arise and putting crew members in their place, Kate added: “I think Heather’s the one to do it and do it very well.”

Don’t get too freaked out

“I mean she introduced herself to me. She drove down to Ft. Lauderdale. She came bearing gifts, she brought me the best cookie I’ve ever had in my life,” the former star of the show told Hollywood Life.

A trailer recently dropped on social media, revealing the team are heading to St. Kitt’s in the Caribbean for the new episodes.

As well as Heather being a newcomer, there will be many others making their debut on the show and will also have to get used to life aboard My Seanna.

Jessica Albert and Fraser Olender make their first appearances in season nine and for the first time in the show’s history, there will be a new captain.

Captain Sean Meagher will be at the helm of My Seanna at the start of the season as a delay results in Captain Lee Rosbach being left on the land.

The latter will return to the fold later on in season nine to see how the crew have been coping in his absence.

In the trailer for the new episodes, Heather’s direct approach to her fellow crew members shines through.

“I put people in line that need to be put in line,” she declares and a press release for her introduction supports her fierce nature.

“Chief stew Heather is eager to deliver her guests an unforgettable experience, but when one of her stews becomes severely unmotivated, she must hustle to pick up the slack and maintain her five-star service,” it reads.

Taking to Twitter, fans of the show have responded to the teaser, despite the premiere being several weeks off yet.

One viewer wrote on the social media platform: “I can’t stop binge-watching all previous seasons of this show. It’s great. I miss Kate, though.”

Another posted: “Finally a Below Deck I can watch on Monday night again. My Monday night Bravo slot is currently empty.”

Whilst a third remarked: “I won’t watch it without Caption Lee. He’s a proper Captain. No one can replace him.”