Home » TV & Movies » Before We Die Recap: Who Died in the Season Finale? — Plus, Grade It!

Before We Die Recap: Who Died in the Season Finale? — Plus, Grade It!

If you though taking down the Mimicas would be as simple as pulling up to a boathouse with guns drawn, you’d be wrong.

Before We Die’s season finale found Hannah, Billy, Tina and the rest of their team surrounding the house for what turned out to be a trap. Christian got through to Hannah with barely enough time to warn the others before the explosion hit. Billy just made it outside, but it was unclear if Tina also survived.

Hannah, meanwhile, was far enough away to sustain minor injuries. Fran found her and radioed for help, only to be shot and killed by Zvonomir.

Elsewhere, Christian fled on foot while Davor, who knew all about his undercover work, pursued him from a car. Christian made it onto a bus and quickly realized that the watch he’d been gifted had a tracker on it. He left it on the bus and slipped away, much to Davor’s frustration.

In the aftermath of the explosion, we learned that Billy survived the blast but was badly injured. Tina, unfortunately, didn’t make it.

Davor and Dubravka pressed Bianca on Christian’s whereabouts and were not happy when she called them butchers for murdering Sean and Stefan — even if Christian pulled the trigger for the latter. She also confessed to telling Fran about video of Sean’s torture but never showed her. That’s when Dubravka issued this threat: They’ll do whatever necessary to protect the family. 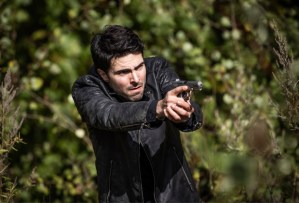 Hannah filled Leonard in about the 150 kilos of cocaine the Mimicas smuggled into the country and her suspicion that someone from the force is on their payroll. Leonard wasn’t exactly thrilled to be kept out of the loop — he runs the department, after all — but seemed receptive to Hannah’s theories. But with only a few files, photos and recordings, they wasn’t enough evidence to bring down the Mimicas. They needed that video of Sean being tortured.

A raid on the Mimicas’ restaurant and residence came up short thanks to Zvonomir, who cleaned things up before the authorities arrived. Leonard’s interrogation of Davor also yielded nothing. Davor kept his cool and had an answer for everything, including the bullet tied to both Sean and Stefan’s murders.

With no evidence to support Hannah’s previous claims about the Mimicas, Leonard suspended her. That left Davor in the clear and Marcus — the rat Hannah’s been searching for — leading an investigation into her.

Hannah paid Davor a visit, acting every bit the concerned mother pleading for mercy for her son. She even asked Davor if his mother knew he was raped, prompting him to demand that she leave. And while he believed she and Sean sacrificed Christian for their own interests, he vowed that his friend would not suffer. That was the best he could do. Hannah pulled what she needed from their tense conversation, which was the knowledge that Christian was still alive and the Mimicas had no idea where he was.

Hannah finally heard back from him and promised to take down the family that had hurt them. “We’re going to beat these f—kers,” she vowed. And she has a plan for how to do just that.

Hannah met with Christian at a safe house in the woods and gave him an envelope filled with money from his father. She also left him a duffle bag with a gun and removed the tracker from her car that would leave Davor right to them. When Davor arrived with cronies in tow, Christian fled into the woods. He was eventually shot in the back.

But Davor’s men were taken down by a sniper — Billy! Christian was wearing a bulletproof vest when he was shot and turned out to be fine. Realizing this, Davor fled into the woods, where Hannah was waiting for him. She chased him through the trees and to the edge of a cliff. With nowhere to run, Davor fired at Hannah, who returned the favor. She caught him in the chest and fell into the water below. Dead. 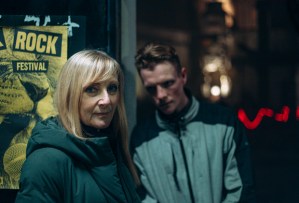 As the dust settled, Hannah urged her son to go and not tell her where he was headed. No postcards, no emails, nothing. They embraced one last time before parting ways.

In his office, Leonard showed Hannah the incriminating photo he found of Christian with the Mimicas and finally understood why she didn’t want to tell him about her secret contact. With a mole still present in their department, Leonard reinstated Hannah to covertly figure out who betrayed them. In a touching moment, Hannah gripped her newly returned badge and held onto the necklace Christian slipped into her pocket during their goodbye. Her new task awaited.

Christian might be hiding out, but he got his happy ending — for now. He reunited with Bianca, who decided not to return to her family. They kissed and walked off towards a new future together.

What did you think of Before We Die’s season finale? Grade the episode below, and sound off in the comments.