Home » TV & Movies » Before Hosting the Next Olympics, Mike Tirico Must Get Through a Sportscaster’s Decathlon 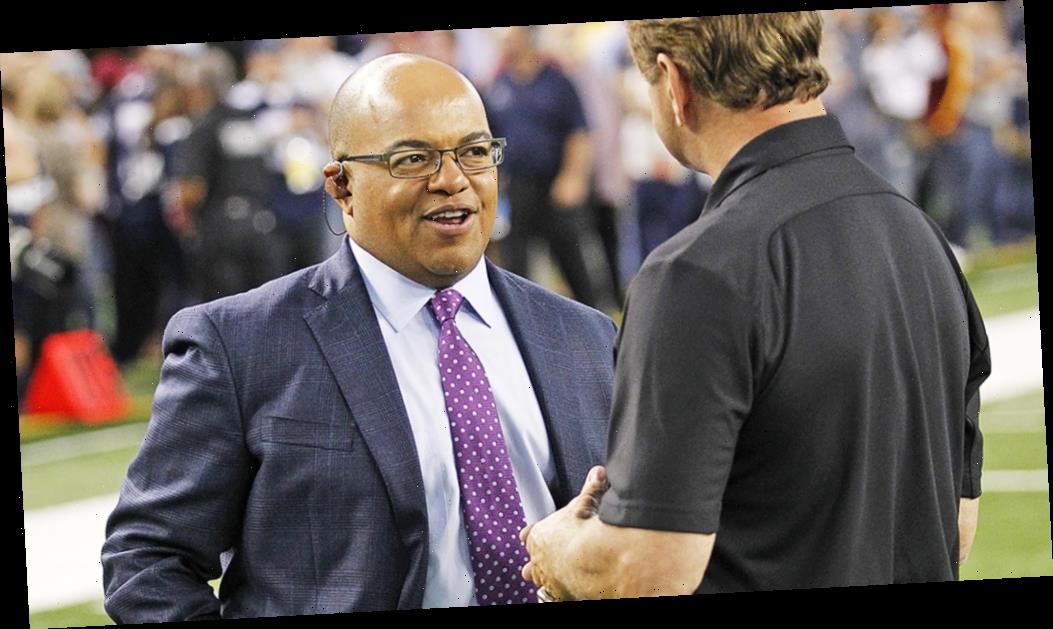 Before Hosting the Next Olympics, Mike Tirico Must Get Through a Sportscaster’s Decathlon

Mike Tirico’s autumn has converged with his spring and summer.

The NBC sportscaster had originally planned to take one really big trip this year – to Tokyo, where he was slated to hold forth at the 2020 Olympics. But that was scuttled and now he’s racing through lots of shorter excursions, several of them for events he was supposed to anchor weeks and months ago.

Tirico has held forth at the Indianapolis 500, originally scheduled for May, and called the fall opening game between Duke and Notre Dame in South Bend, Indiana.  He recently called the Kentucky Derby (it should have taken place May 2) remotely. On one recent Sunday, he traveled to a course in New York’s Westchester County for a round of U.S. Open golf before making his way up to NBC Sports headquarters in Stamford, Conn., so he could do his usual duties on the network’s “Football Night in America.”

“The run I’ve been part of in maybe the last month or so will never happen again,” Tirico says in a recent conversation.

Sports, thwarted for months by the coronavirus pandemic, are back with a vengeance, but now many of them are taking place in seasons with which they have little association.  And that has spurred some of the industry’s most popular sportscasters to hustle like they haven’t since  – well, when? CBS Sports’ Jim Nantz, for example, must juggle his CBS Sports golf duties with his responsibilities to handle football broadcasts with Tony Romo.

Tirico will keep turning up in interesting places. This Sunday, he helps out with NBC’s “Sunday Night Football,” which is giving 75-year-old Al Michaels a few “bye weeks” so he can cut down on his travel while the pandemic continues. Tirico, who appeared for a decade on ESPN’s “Monday Night Football” and held forth on “Thursday Night Football” when NBC shared that property with CBS, doesn’t think fans will be jarred when he turns up this weekend from New Orleans. “I’m very familiar with the league and I think people who watch the league are familiar with me,” he says.

Even so, he will have new elements to navigate. “It will be incredibly odd to be in that stadium in New Orleans with empty stands,” he says. “I’ve done probably more Monday night games in New Orleans than any other stadium. We were there a lot. One of the favorite moments of my career happened there – that was the return of the NFL after Hurricane Katrina. The Saints were playing the Falcons. That event sticks out for me above any other event I’ve been involved with.”

Fans may not have to deal with as much of an emotional wallop. They have seen Tirico on Sunday football occasionally in the past. And he says he has worked previously with “Sunday Night Football” personnel like Cris Collinsworth and Michelle Tafoya. On a past Sunday game, “Cris encouraged me, ‘Do the game you’ve always done it, because you’ve done it for ten years,” he recalls. “He made it easy for me.”

Tirico has had the opportunity to try new things during this strange time. Over part of the summer, he hosted a daily lunchtime talk show on NBCSN. He got to interview Nascar drivers, college coaches and more. “It took me back to the days when I was on the radio. You could do nine- or ten-minute conversations with a variety of guests,” he says. He wouldn’t mind finding another outlet for such stuff, and suggests NBCUniversal’s new streaming-video hub, Peacock, may be just such a venue. “I’d love to find a way to do more things like that,” he adds.

As busy as he is – Tirico is expected to call NBC’s annual Thanksgving-night NFL broadcast, as well as an early-January Wild Card game – he has more to do in the not-too-distant future. He is NBC Sports’ lead primetime host for the Olympics, and if the International Olympic Committee can make things work, Tirico will have duties at a 2021 Summer Games in Tokyo and a 2022 Games in Beijing the following February.

He looks forward to being there for those moments, particularly the opening of a 2020 Games. “That will probably be, if not the first, certainly the largest gathering of people from around the world,” he says. “We could be at the scene of one of the most memorable moments in sports, that Olympics Opening Ceremony. I think about that often, and I really hope we get there. That could be one of the great days we talk about for the rest of our lives.”

Before he can get ready for those duties, Tirico has his own Olympics-like event to overcome. He knows, however, what may lie ahead of him if he can make it through the golf matches, the trips to Notre Dame and the Sunday football showcases. “It keeps me hopeful,” he says.

'The Simpsons': Hank Azaria Replaced by Alex Désert as the Voice of Carl