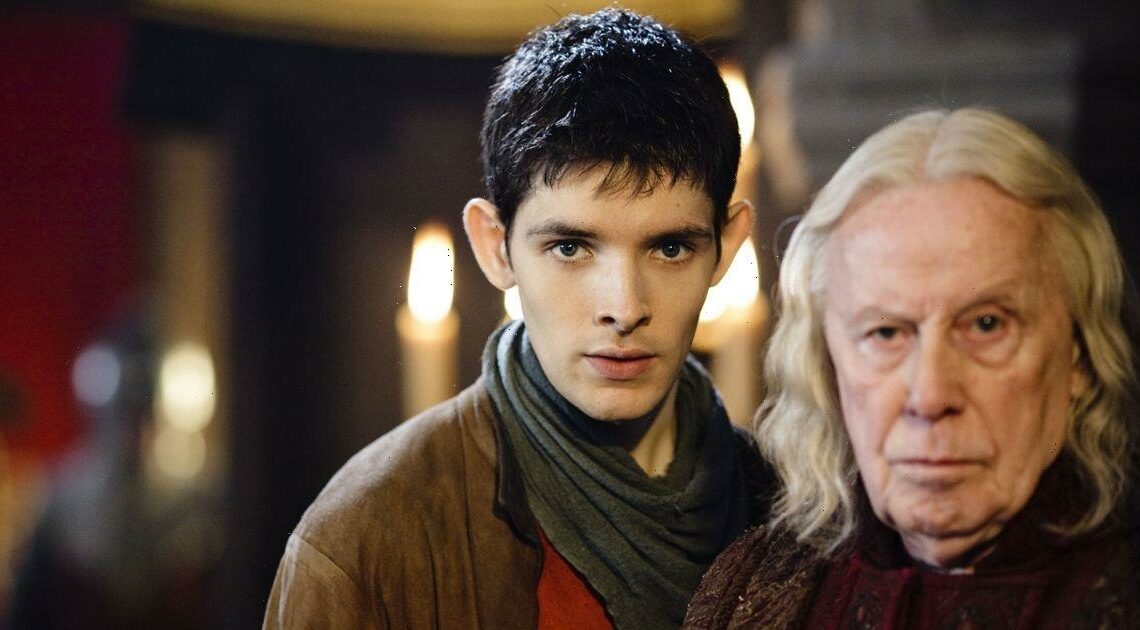 Magic, knights in shining armour and plenty of drama lay in store for fans of smash hit BBC drama Merlin in the noughties.

The beloved series followed the young wizard Merlin as he took on adventures alongside Prince Arthur, with generations of fans captivated by the stories that unfolded.

Merlin made household names of its young cast, including Colin Morgan and Bradley James, with a whole host of TV legends such as John Hurt and Anthony Stewart Head joining the series.

As Merlin celebrates its 15th anniversary this year, Daily Star takes a look at where the cast are now. One of Colin Morgan's most iconic roles is the young wizard Merlin, after the actor landed his breakout TV role in the hit BBC drama series.

While Merlin and Prince Arthur got off to a stand-offish start in episode one, their bond grew through each series – with much humour involved.

Prince Arthur actor Bradley James also revealed that he and Colin had a close friendship off-screen too, describing it as a "bro-mance."

"After seeing each other every day for three or four months we have worked up a bit of a bond," said Bradley.

"Tony Head, who plays Uther Pendragon, said the other day how nice it was that so much of our relationship is really built on humour. We do a lot of talking nonsense."

He added: "I suppose that it is a bromance. I heard that term for the first time recently in America."

Colin's performance in the series proved popular with fans and critics alike, leading him to win Best Actor in a Drama Performance at the 2013 National Television Awards.

From there it has been onwards and upwards for Colin, appearing as Leo Elster in Humans opposite Marvels Eternals star Gemma Chan, Nathan Appleby in The Living And The Dead, as well as series three of The Fall.

He also most recently starred as Billy Clanton in Kenneth Branagh's award-winning film Belfast, as well as theatre productions such as A Number in 2020.

However, Colin does not appear to use social media and keeps his personal life away from the public eye, so it is not known whether the star is single or in a relationship.

Sir John Hurt was the voice of The Dragon in Merlin, who often gave the young wizard advice on his destiny.

However, John was already a huge star before appearing in Merlin, after rising to fame in films and TV series such as A Man For All Seasons, The Naked Civil Servant, Midnight Express and The Elephant Man.

He also gained a new generation of fans as Mr. Ollivander in the Harry Potter film series, as well as appearing in Indiana Jones and The Crystal Skull, Tinker Taylor Soldier Spy and as The War Doctor in Doctor Who.

It is no surprise that with such a stellar career, John was awarded the BAFTA Outstanding Contribution to Cinema Award in 2012, and was knighted in 2015 for his services to drama.

Away from the cameras, John had two children and was married four times – first to actress Annette Robinson from 1962 to 1964, who has appeared in films such as The Young Ones with Cliff Richard and The Party's Over.

However in 2015, John announced that he had been diagnosed with early stage pancreatic cancer and that he was undergoing treatment.

During the same year he announced that he was in remission, but the cancer returned and the beloved actor died on January 25, 2017 at the age of 77 years old.

"He touched all our lives with joy and magic and it will be a strange world without him."

Fans and friends from the world of entertainment paid tribute to the star, with director Mel Brooks tweeting: "No one could have played The Elephant Man more memorably."

He added: "He carried that film into cinematic immortality. He will be sorely missed."

Comedy legend Stephen Fry tweeted that John was "great on the stage, small screen and big," while Lord Of The Rings actor Elijah Wood paid tribute saying: "It was such an honor to have watched you work, sir."

Bradley James rose to fame as 'The Once and Future King' Prince Arthur in Merlin, with the star later presenting the documentary The Real Merlin and Arthur for BBC Wales.

Since then, the talented star has not left our screens, appearing in Homeland, as well as Underworld: Blood Wars with Hollywood starlet Kate Beckinsale.

He also played Damien Thorne in the TV series Damien, based on The Omen film series, and is soon due to appear in Vikings: Valhalla later this year.

Like his co-star Colin, Bradley tends to keep his personal life private, and it is not known if the star is single or in a relationship.

However, Merlin co-star Colin revealed that Bradley has a secret talent away from the cameras – impersonations.

Speaking to The Daily Record, Colin said: "Bradley's very observant. He picks up on people's quirks and habits and is very good at impressions. He can do just about anyone on the cast."

Richard Wilson OBE played Camelot court physician Gaius in Merlin, acting as a mentor and friend to the young wizard.

However, he is just as well known for playing Victor Meldrew in BBC comedy One Foot In The Grave, as he is for appearing in Merlin – with Richard even making an appearance as himself in Channel 4 series Father Ted talking about his comedy catchphrase, "I don't believe it!"

That's not all, as the star has also appeared in Carry On Columbus, Gnomeo and Juliet, Gulliver's Travels, Cluedo, Trollied, New Tricks and most recently, Around The World In 80 Days.

Richard was given an OBE in the 1994 birthday honours for his services to drama, and with such a stellar career, it is no surprise that the actor has an estimated net worth of $5m (£4m) according to Celebrity Net Worth.

The actor has also spoken openly about suffering a heart attack in 2016, revealing during an interview with Saga Magazine that the incident saw him "fall from a balcony."

"I fell from a balcony when the heart attack happened," said Richard.

"I hit my head, so my memory was affected to some extent because it caused a bleed on the brain.

"I was put on life support in intensive care. But as the Stephen Sondheim song goes 'I'm still here!'"

He continued: "I've got a bit of a hip problem at the moment and I have to use a stick but otherwise I'm OK."

Anthony Stewart Head took on the role of King Uther in Merlin – but he was already a huge star before appearing on the series.

Not only has he appeared in theatre productions such as Godspell and The Rocky Horror Show, he was also famous for starring in 12 adverts for coffee brand Nescafe, which showed a couple falling in love with one another throughout series.

He also played librarian and Watcher Giles in Buffy The Vampire Slayer, with co-star James Marsters saying during a Q&A panel at Comic Con Liverpool 2022: "The nicest person was Tony Head, by far.

"He was the oldest, so he was the most mature, but he's also just an incredible person. He was also the best actor on set."

Anthony has also most recently appeared in TV series including The Canterville Ghost and Ted Lasso, as well as the film Schools Out Forever in 2021.

When he is not entertaining audiences, Anthony lives with his wife Sarah Fisher in Bath and the couple have two daughters, Emily and Daisy.

Performing runs in the family too, as both Anthony's daughters are actresses. Angel Coulby rose to fame as Guinevere in Merlin, after making her TV debut in Scariest Places On Earth and 2001's BBC sitcom 'Orrible.

From there she has not left our screens, appearing in TV series such as The Tunnel and Dancing On The Edge, as well as appearing in theatre productions such as Albion.

She also most recently appeared in TV series Suspicion, Moving On and The Net, as well as The Forest at The Hampstead Theatre.

However, the actress cast doubts on whether Merlin would return for a sixth series, despite the fandom calling for the beloved drama to be back on our screens.

Speaking to Digital Spy in 2016, Angel said: "I think that ship has sailed, I'm afraid.

"I think we're all a bit too old now – if they did ever do a film, we'd probably all be recast in younger form!"

"It was a great experience and a show I'm still very proud of," Angel added.

"But we've all moved on to other projects now, so Merlin will just have to remain a happy memory."

Like her Merlin co-stars, Angel keeps her personal life private, but it is known that she welcomed a child in 2018.

Katie McGrath played High Priestess Morgana Pendragon in Merlin – but her career could have taken a different turn entirely.

Before she became an actress, Katie worked at Image Magazine in Ireland as a journalist, before taking on a job as a wardrobe assistant on the set of BBC drama The Tudors.

From there she was encouraged to enter acting, and the rest as they say is history.

Since Merlin, Katie has appeared in TV series and films including Dracula, A Princess For Christmas, Labyrinth, Jurassic World, Slasher and most recently, Supergirl.

Similarly to her Merlin co-stars, Katie leads a very private life and it is not known if the star is single or in a relationship.

Leeds 0 Brentford 0: Whites miss chance to pull away from relegation zone as Bees keep up hopes of European spot | The Sun
World News