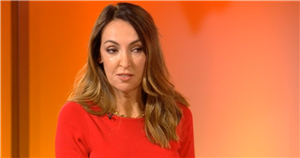 Dan is one of the competitors on this year's show, currently partnered up with Nadiya Bychkova – and will take to the Strictly dance floor for the first live show on Saturday, September 25th.

But the tense debate came as sports journalist John Watson was delivering the news of the day from the red sofa, bringing up the story of boxer Oleksandr Usyk – who adopted juggling as his warm-up routine in the ring.

Footage of the impressive juggling technique graced our telly screens, with the sports star even catching a ball behind his back.

John agreed: "Improves hand-eye co-ordination, a bit of focus. And as we know, boxers like to put on a show, don't they? He'll be bringing out the unicycle next!"

"Showing off is what I would probably say," Sally chimed in.

Turning to Dan, she added: "Like you need to own the dance floor, he's owning the ring."

John quickly advised: "You should employ a bit of that, there you go!"

"Try a little bit of pre-dance juggling?" Dan wondered. "Okay, thank you John for the tip!"

But John wasn't finished dishing out the dancing advice, as he went on: "Maybe incorporate it into your routine!"

Which was when Sally stepped in to put a stop to the proceedings, saying sharply: "No, no!"

Dan quickly agreed: "No, I think the potential things that could go horribly wrong at that point, John! Thank you for that."

It comes after Dan already sustained an injury which forced him into a hospital dash just hours before the Strictly launch show.

Dan hit his head on a glass window and was rushed to hospital for a CT scan.

Posting a snap of himself wired up to a blood pressure cuff and wearing a mask, Dan wrote on Instagram: "Bit of head-based drama today!

"After whacking my noggin on the big glass window yesterday, I got sent to A & E today because I was feeling a bit wobbly."

He added: "A lovely nurse at Barnet Hospital called Karina checked my vitals and 6ft 9 Dr Erik Witt gave me a CT scan which was clear."

Dan hinted that he would be out of Strictly training for "a few days" – but it doesn't look like he'll be missing his first ever live show this Saturday.

BBC Breakfast airs from 6am every day on BBC One.

Simon McCoy left with head in hands over glaring GB News slip-up: ‘Thought it was water’

Vice President of Suriname and former rebel leader, 60, plays HIMSELF as captain for his own team Inter Moengotapoe
World News