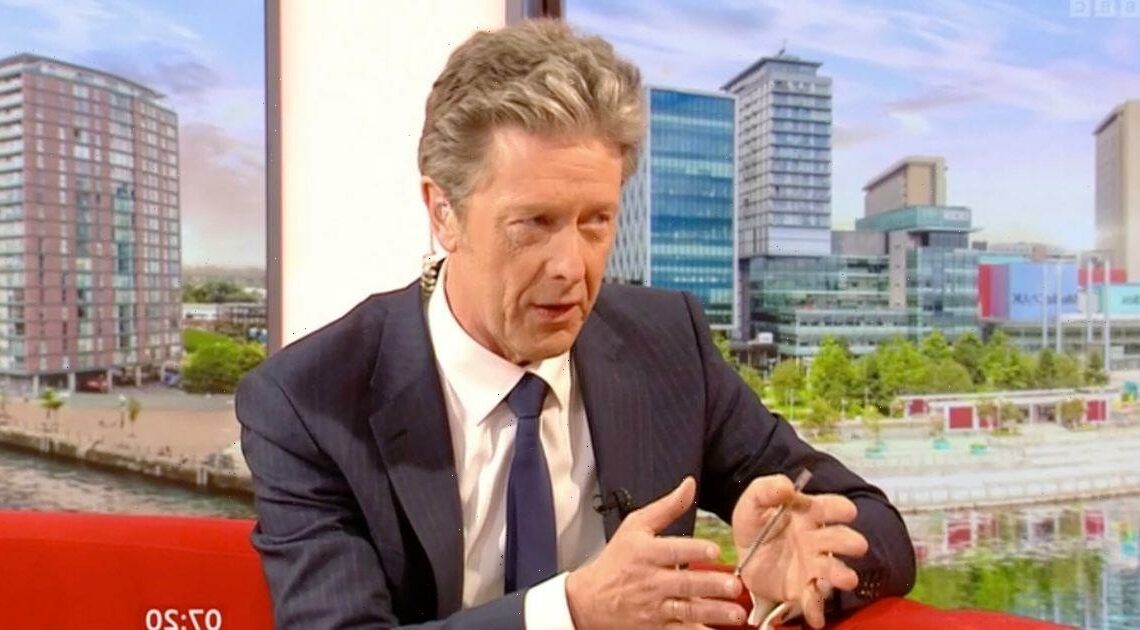 BBC Breakfast turned awkward as Charlie Stayt didn't hold back in his on-air grilling of one energy boss.

Charlie was presenting the programme alongside co-star Naga Munchetty on Friday (April 1) and discussing the current cost of living crisis after various energy websites went down yesterday as people frantically tried to call in their meter readings.

With the cost of energy soaring, Charlie was keen to get some real answers out of Octopus Energy CEO Greg Jackson – but soon slammed his responses as "generic".

Charlie admitted he would be "blunt" in his questioning, as he faced off with Greg to ask: "So let's talk about the reality of what people are going to deal with now.

"A lot of questions coming in to us this morning, and I'll put this very bluntly to you about profit. They are alarmed and angered by the fact that they see energy companies – and you can answer for your own company, no-one else's – that they're profiteering from a situation of real hardship.

"Will you be making profits at people's expense?"

Greg then responded: "We've never made the profit, and we're certainly not going to make one this year. Last year we put over £100million of our own money into helping customers with bills."

Charlie then went on to question Greg on people in poverty or people living with a disability who need assistive equipment – the cost of which could rise considerably in the current crisis.

"What will you do if someone comes to you and says, 'I cannot afford my bill'?" he quizzed.

Greg replied: "We had 80,000 phone calls yesterday, we speak to 30 or 40,000 customers in a typical day. We've got the Octopus assistance fund which helps people in most need.

"Also we're the only company pricing significantly under the energy cap for our loyal customers. We are doing everything we can to help. We've worked incredibly hard to help the government bring schemes into place that will help everybody, and help those who need it."

He also vowed to continue speaking to the government – but Charlie wasn't impressed.

Charlie said: "Your answers are very generic. I'm trying to work this one out. If you have a customer who has a disability, for example – and I'm focusing in on that because it is a spotlight on something very specific.

"What does happen next? You don't have any leeway in the system that you haven't already offered. What happens next?"

Greg argued: "I have been very clear that the Octopus assistance fund is there to help people in exactly this circumstance."

Unsatisfied, Charlie pressed: "So let me pin you down on this, Mr Jackson, because this is very important. This could apply to people in poverty as well, who can't afford their bills.

Jackson admitted: "At the end of the day you've only got so much assistance you can provide."

Fans at home, however, were divided by the interview style, as one complained on Twitter: "Naga & Charlie seem to be in rude and obnoxious mode in their interviews this morning."

As someone else argued: "Really quite awkward watching Charlie Stayt repeatedly try to goad and anger the CEO of @OctopusEnergy on @BBCBreakfast this morning.

"Trying to bash a company that has made a £100m hardship fund that could hypothetically run out… expect better!"

And a third fan fumed: "Charlie accusing someone of generic answers when your questions are hypothetical really isn’t very insightful or helpful."

BBC Breakfast airs daily from 6am on BBC One.

Ramadan 2022: Mubarak Kareem quotes – How to wish someone a happy Ramadan
World News