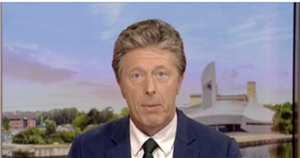 BBC Breakfast viewers were left cringing behind their hands on Thursday morning, as host Charlie Stayt entered into a tense row with a Conservative MP live on-air.

MP Helen Whately had appeared on the programme to discuss the new tax rise to cover social care and the NHS backlog created by the Covid-19 pandemic, with Charlie joined by co-host Naga Munchetty on the red sofa.

But things quickly turned tense as the Social Care Minister was interrupted on more than one occasion by Charlie.

It came as Charlie quizzed Helen on when the extra tax money would enter the financial system and be distributed to the social care sector.

"How much will the amount be, can you give us some numbers?" Charlie pressed, as the MP continued speaking. "We're talking about April of 2022, and money will start going into the system from this new tax – so how much?"

But the tense incident was far from over, as he went on to ask about vaccinations for care home staff.

Charlie wanted to know if care home workers faced getting sacked if they weren't double jabbed.

"Can I just pick up, I really want to pick you up on the language around that-" Charlie attempted to say, but Helen continued to speak.

She said: "Staff looking after those vulnerable people should be vaccinated. 90 per cent of staff in care home have been vaccinated-"

"I really want to pick you up on that," Charlie continued. "The word you used was 'should be', so if they refuse, they should be sacked? That seems like… is that the logical extension of what you're saying?"

Helen said: "Well, we are supporting care homes to work with their staff, so for those who are hesitant and worried about getting vaccinated to give them the most possible support-"

"And what if they don't?" Charlie cut across her.

As Helen appealed to care home staff to get jabbed, Charlie tersely put in: "Understood, but what if they don't? It's a simple question."

She responded: "Well, then the care home would have to work with those staff members to see if there are any alternate roles they can do…"

Viewers of the show quickly turned to Twitter to comment on the "unwatchable" interaction, as one posted: "Charlie Stayt and Naga Munchetty on together, unwatchable. Charlie still interrupting now switching to GB News!"

"Final straw," another tweeted, "the presenters nowadays seem far more interested in their own voices than actually hearing from their interviewees – you asked a question Charlie – don't interrupt the answer!"

While a fourth followed up: "Talk about rude! Keep interrupting your interviewee! Downright rude and annoying."

However, more still thought Charlie was in the right, as one added: "Who is that rude woman Charlie is trying to talk to?"

"#CharlieStayt for leader of the opposition!" another cheered, while someone else agreed: "Whately skewered by Charlie there!"