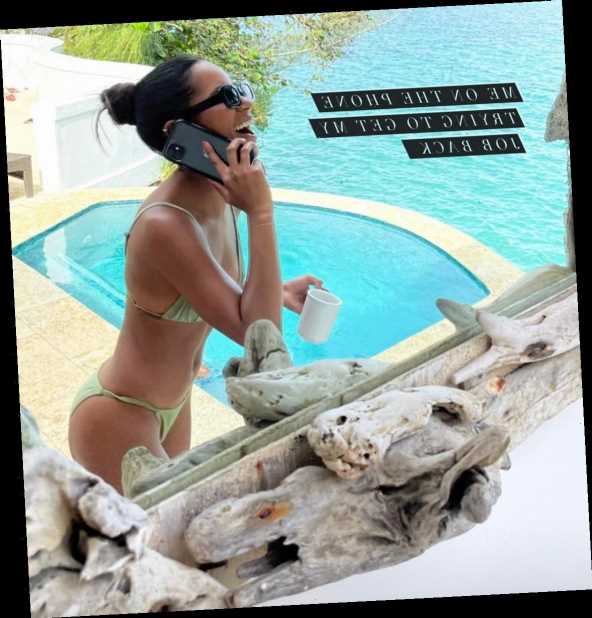 On Tuesday, The Bachelor contestant teased on her Instagram Story that she was looking to return to her job as a communications manager after recently revealing that she quit her position to go on the dating show.

In the post, Springs is seen standing near a luxurious pool overlooking the ocean while talking on the phone and holding a coffee mug.

"Me on the phone trying to get my job back," she captioned the photo of her laughing.

During Monday's episode of the ABC show, Springs opened up to Bachelor Matt James about her decision to sacrifice her job to appear on the series.

: The Bachelor: 3 Women Go Home Ahead of the Rose Ceremony and Matt James Decides His Hometown Dates

"A few days ago, I did something really big. I had to resign from my position to be here," Springs revealed during the final group date of the season.

"I knew that was a decision I was going to have to make but after weighing what this journey could mean for me, to give me that opportunity to find love with someone, with you specifically, I thought it was worth it," she continued. "I knew it was going to be a really hard decision."

As the daughter of a single parent, Springs said she saw her mother make sacrifices often.

"She had to make a lot of sacrifices for me to have a better life than what she had," Springs shared. "And so my work wasn't just a job to me, it felt like a dream. But being here with you makes it feel extremely worth it."

James appreciated the gesture. "That you did that to be here with me is everything," he told Springs.

Will you accept this rose? Sign up for PEOPLE's free weekly Bachelor Nation newsletter to get the latest news on The Bachelor, The Bachelorette and everything in between!

At the end of the episode, James gave Springs one of his last roses, earning her a spot in the upcoming hometowns episode.

Along with Springs, Rachael Kirkconnell, Michelle Young and Serena Pitt also received roses to advance to the final four.