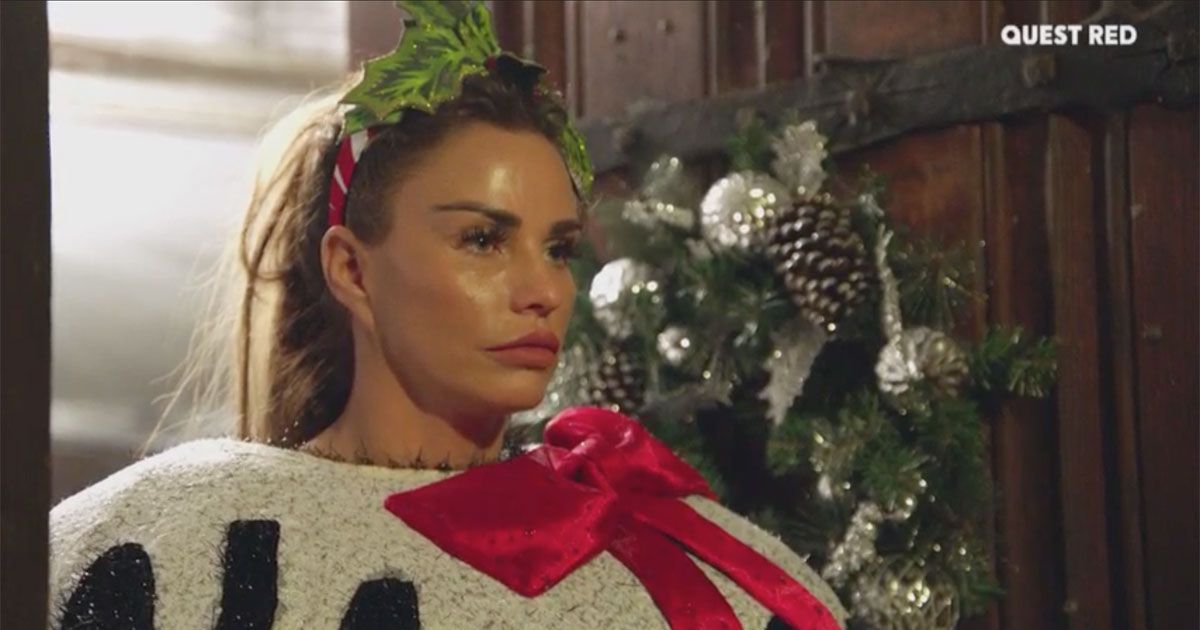 However, it wasn’t quite the olive branch the former stripper may have thought it was, as the model proceeded to criticise his clothes and give him an awkward present.

In the clip from the forthcoming festive special of her reality show Katie Price: My Crazy Christmas, Katie ridicules Kieran’s choice of Christmas jumper… despite the fact she’s dressed as a Christmas pudding.

Katie, 40, had invited Kieran, 31, as a nice gesture because their children Bunny, four, and Jett, five, would be in attendance, but it looked like she was regretting her decision.

When Katie’s ailing mother Amy Price realises Kieran is arriving, she makes a swift exit to another part of the house as he she doesn’t want to be in the same room as her former son-in-law.

Speaking to camera outside the mother-of-five’s £2million mansion, Kieran said: "I’m feel a bit nervous… apprenhensive. I know it’s gonna be awkward. You never know what to expect with Kate. But it’s something I want to do for the kids and hopefully make their day special."

Opening the door to her estranged spouse, Katie gasps at Kieran’s flashing Christmas tree jumper: "Oh my God, you’re so sad and pathetic. What do you think, you’re back to your stripping days?"

Clearly used to her vitriolic tongue, Kieran shrugs off the comment and smiles.

His ex then changes tone and thanks him for coming: "I did tell my mum, she just doesn’t want to be in the same room (as you). She doesn’t want to breathe the same air. But I said, I’ve got principles. I’m being the bigger person."

Kieran agreed: "I’m not here to cause arguments. I just want to come in and see the kids for 5 minutes."

Speaking to camera, Kieran said: "I completely understand how Amy feels. It’s one of those times of years when you don’t want drama, you don’t want atmosphere. She’s not very well either and I don’t want to be putting her stress levels up."

Once inside the intimate party, Kieran awkwardly greets Katie’s close friends, while his children looked thrilled to see him.

Katie then presents her ex with a huge gift bag, which misleads Kieran as it only includes a tiny heart-shaped locket.

Once he opens it, he find a photo of his estranged wife, while the other side is empty.

Clearly waiting to make a pop at her ex, Katie quips: "This is a little something for you. Something you’ve always dreamed about. You’ll never, ever forget me…. Oh, it’s a picture of me in a love locket!"

While Kieran said it can go to Bunny, he feigns being grateful and tells his ex she’s "very thoughtful".

Katie then can’t help but dig the knife further and refers to Kieran’s new girlfriend, Michelle Pentecost, who he’s been dating since the spring.

She said: "So on that note, enjoy showing Michelle your necklace… maybe she might want to wear it?"

Clearly regretting having him in the house – although perhaps enjoying the drama for the reality show – Katie later tells the camera: "It was really awkward to have Kieran in the house, especially after what we’ve been through and to be honest, I couldn’t wait to get him out of there."

Katie and Kieran are still legally married, having believed to have split last year after five years of marriage.

However, their relationship status was confusing as Kieran continued to live with Katie until May this year, moving out the same month she met now-boyfriend Kris Boyson.

Katie Price: My Crazy Christmas airs exclusively on Quest Red on Monday 10 December at 10pm and via the QuestOD app.

What time is First Dates series 11 on Channel 4 and where is the dating show filmed?