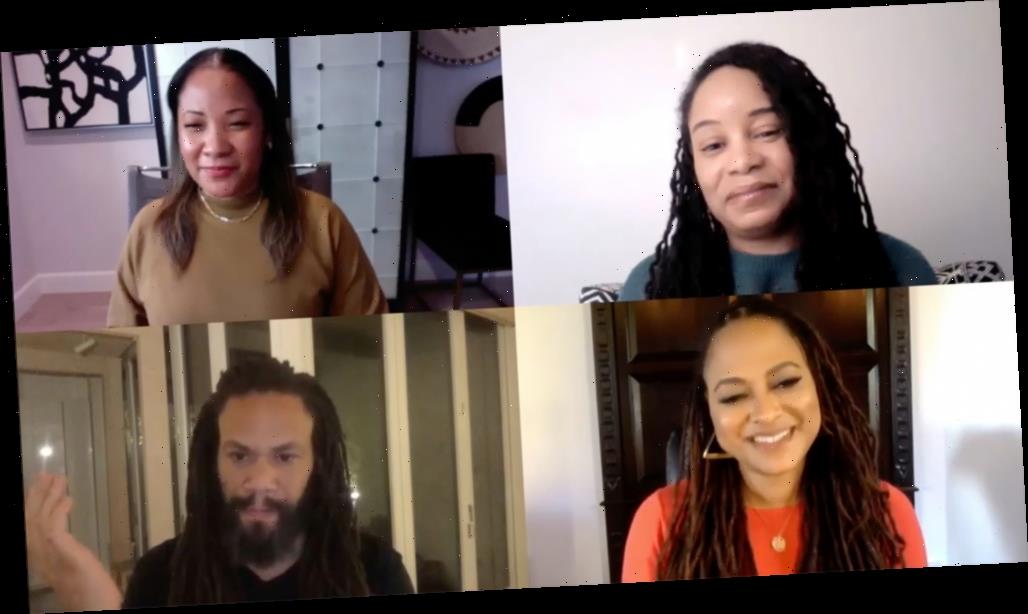 The Black List founder Franklin Leonard kicked off the virtual Sundance panel “ARRAY 10: A Decade of Disruption” by chatting with ARRAY founder and Emmy-winning Ava DuVernay, President Tilane Jones and VP of Public Programming Mercedes Cooper about the origin of the narrative change collective which puts shine on creators and artists of color as well as women filmmakers.

Leonard and DuVernay reminisced about special dinners of Sundance past where, at the first one DuVernay hosted included “more Black folks in the room than at Sundance” as a whole. The conversation shifted to a dinner party icebreaker which Leonard loves to ask his guests:  “What is your guilty pleasure movie?”

Cooper claimed the classic Mahogany as her guilty pleasure while Jones said Breakfast at Tiffany’s was hers — DuVernay quickly intervened.

'Misha And The Wolves': Sundance Documentary Sells To Overseas Territories

The trio is celebrating 10 years of ARRAY, which launched at Sundance in 2011. Since then it has shaken the status quo and disrupted the way audiences and Hollywood looks at film and TV productions in front of and behind the camera. Having released 29 films since its inception and having a robust slate of TV projects, ARRAY has challenged and disrupted systems of distribution, production and exhibition of film and TV in the best way possible. It has opened Hollywood’s eyes and has changed the white cisgender hetero male standard. By championing people of color, the queer community and other marginalized voices, ARRAY, which is led by three Black women, has bolstered the independent film space as well as work with social justice which is seen through the company’s projects including the Law Enforcement Accountability Project (LEAP).

DuVernay was an early adopter of the streaming space which is now more than ever thriving. She was a big advocate of streamers when no one else was looking in that direction. Leonard asked DuVernay about building ARRAY over the last decade and how they navigated the battle of  “physical space versus digital space”.

“They go hand-in-hand” said DuVernay. She said that streaming was a good “oppprtunity for democratization of cinema on that platform” She added that streamers was an opportunity to watch films freely that are coming from different points of view rather than the perspectives from the dominant culture. To add to that, “the gaze that isn’t specialized.”

This spills over into the Amanda Theater on the ARRAY campus in historic Filipinotown in Los Angeles, which is the first Black-owned independent theater in the city. Led by Cooper, the programs at the Amanda Theater center on Black stories as well as stories from people of color and women.

ARRAY has since introduced incredible artists that didn’t have the chance to shine at major festivals or platforms. Case in point: Ghanian filmmaker and musician Blitz Bazawule. ARRAY acquired his visionary pic The Burial of Kojo, a film that was not accepted into Sundance, SXSW, TIFF or other fests. ARRAY bolstered the film and it became a critically acclaimed piece of cinema ending up on numerous best-of lists in 2019. The hits don’t stop there. ARRAY has released films such as Residue, Lingua Franca, Jezebel, Merata, Burning Cane, among others — all of which amplify underrepresented storytellers.

ARRAY is continuing to create change and bring inclusivity to film and TV with the recently announced ARRAY Crew, which is the first comprehensive and inclusive database that supports systemic changes in the below-the-line hiring practices of the industry. The platform, which is set to launch in the first quarter of 2021, aims to connect underrepresented crew members to hiring managers who practice inclusive outreach.

Jones said, “We really wanted to take the excuse away from those folks who say that they don’t hire diverse crews because they don’t know any.”

“This was challenging,” DuVernay admitted to building the platform. ARRAY Crew is more of a technical venture for the company, but the team wanted to learn.

The database all starts with Excel spreadsheets of inclusive crew members. They took the spreadsheets of all the crews that worked with ARRAY for the 10 years and then started to reach out to friends and other production studios to add to that. They wanted all these lists in one place. “The next thing you know, we have a tech platform,” said Jones.

Keeping in line with ARRAY’s practice of inclusivity and not farming anything out, DuVernay said they hired a Latina woman to build the infrastructure of the platform. Now they have five full-time tech people and a CTO.

With LEAP in full swing, ARRAY Crew and a virtual platform on the horizon, ARRAY isn’t slowing down any time soon.

Jones also teased something called ARRAY Sky which the team kept under wraps. Perhaps it’s a new airline from ARRAY? Either way, ARRAY continues to move that needle and sticks with DuVernay’s memorable quote “If your dream only includes you, it’s too small.”