Home » TV & Movies » Ariela and Biniyam are engaged after awkward fight during religious celebration on 90 Day Fiance: The Other Way 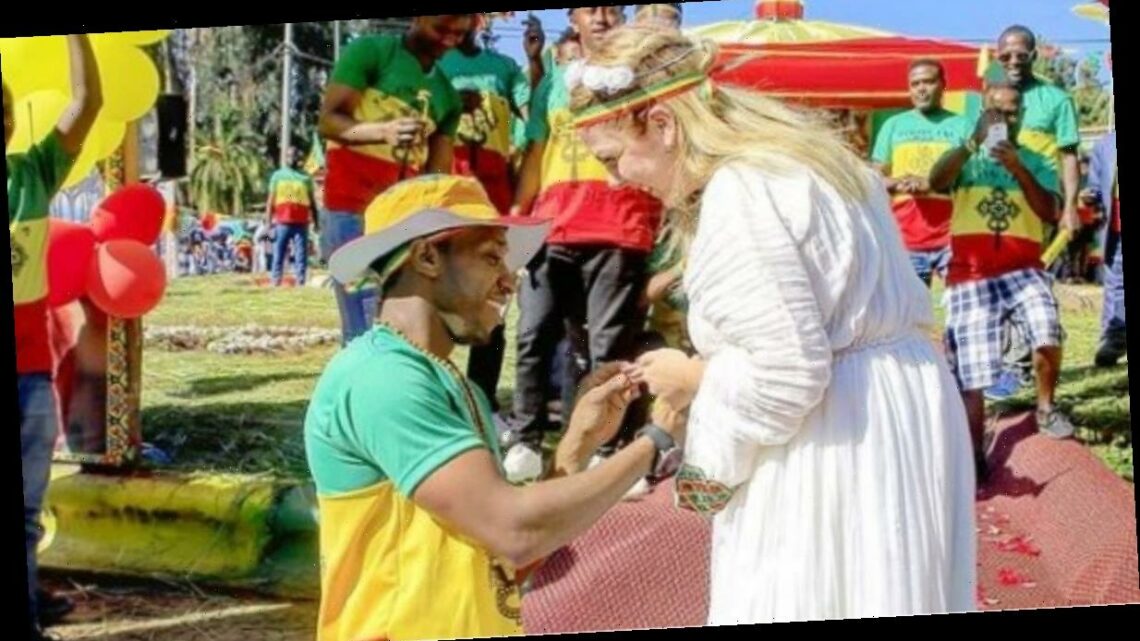 Ariela and Biniyam are engaged after awkward fight during religious celebration on 90 Day Fiance: The Other Way

90 Day Fiance: The Other Way couple, Biniyam Shibre and Ariela Weinberg, are engaged!

It’s been anything but smooth sailing for the couple. After yet another heated argument during an Ethiopian celebration, fans weren’t sure it was going to happen.

Ariela and Biniyam decided to take part in an Ethiopian holiday known as Timkat.

This orthodox holiday celebrates the day of Jesus’ baptism. Biniyam explained that people come from near and far to celebrate this holiday, and he wanted to show Ariela and experience it with their one-month-old son, Aviel.

He also shared that one of the more fun traditions is the tossing of lemons.

What Ariela wasn’t aware of was that Biniyam had planned to propose to her while they celebrated.

During a confessional with producers, Biniyam explained, “Today is a special day. I plan on proposing to Ari[ela]. I would love to be with her for the rest of my life.”

While Ariela initially said she was excited to see why this day was so important to Biniyam, once they pulled up and saw the crowds, she was clear she was in over her head.

Immediately, Ariela was concerned this event was dangerous and overstimulating for baby Aviel.

“We just got here, and I’m really wondering, are we doing the right thing by bringing Avi[el] here? There’s a lot of people here, and there’s, like, open sun, and the speakers are really loud. The baby is only one month old,” she explained.

Biniyam managed to convince Ariela to get into the crowd, huddled around priests that sprayed holy water over them. The crowd closely packed together, and things started to get pushy.

At this point, Ariela lost her patience and, in a panic, told Biniyam that they needed to go. Once they left the crowded area, they engaged in a heated argument when Ariela said Biniyam is constantly pushing her boundaries.

Of course, the language barrier didn’t help either, but the hurt feelings were clear. Biniyam said if things kept going wrong, he might not propose to Ariela.

Ariela and Biniyam make amends and wind up engaged

While still heated, Biniyam took Ariela and Aviel to his brother’s house so she could breastfeed him. They sat together, and Ariela told Biniyam he needs to understand she’s trying to protect the baby.

Biniyam decided it was best to step away from the situation to cool off and told Ariela he would celebrate on his own.

Given time to reflect, Ariela admitted she might have overreacted.

“I do have a tendency to freak out. Especially when it involves my son, but he [Biniyam] thinks I’m looking for an excuse to make conflict. He doesn’t realize I’m really worried, rightfully so. At the same time, though, I could have expressed myself in a more calm manner,” she confessed.

Realizing she didn’t want to ruin their entire day over a fight, Ariela passed the baby to Biniyam’s sister and tried to track him down so they could make up.

When she found him in the crowd, Ariela hugged Biniyam and told him she loved him. Biniyam led her to an open area and proposed with a ring inside a lemon.

Ariela happily accepted his proposal and explained to producers afterward, “This is a big surprise. I mean, after the day we just had, this is so crazy. This is the coolest proposal of all time, and the fact that we were fighting all day and then I would say yes, just goes to show that our relationship is a little bit like that. You know, even if we fight, we still love each other at the end of the day.”