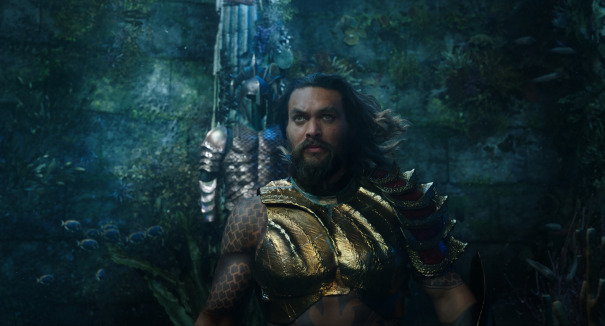 Warner Bros/DC’s Aquaman took his first strokes in China today, grossing an estimated $24.6M (RMB 169.5M). The studio has been pulling out the stops locally as the Middle Kingdom is launching the Jason Momoa-starrer two weeks ahead of its domestic release. The DCEU has not had the draw in China that the Marvel Cinematic Universe has enjoyed, but Aquaman is poised to hit a high-water mark for the DC brand with a possible $80M+ debut weekend.

Already, the flash estimate on 30,500 screens, 100% of which are 3D, is the highest opening day ever for a WB title and the best industry opening day ever for December. The film commanded 86% market share on Friday. Online sentiment is high with a Maoyan score of 9.5, Taopiaopaio at 9.4 and Douban at 8.4.

Previous DC outings Batman V Superman: Dawn Of Justice, Wonder Woman and Justice League had full China opening frames of $57.2M, $51.8M and $38.2M, respectively and at unadjusted rates. The Middle Kingdom was ultimately the top market for each of those pics (Suicide Squad did not release there), although just Justice League cracked the $100M mark at cume.

Directed by James Wan, the standalone sees Momoa’s Arthur Curry/Aquaman learn he is the heir to the underwater kingdom of Atlantis, and that he must step forward to lead his people, becomiung engaged in a perilous quest for ancient secrets. Amber Heard, Patrick Wilson, Niocole Kidman, Willem Dafoe, Dolph Lundgren, Djimon Hounsou and Yahya Abdul-Mateen II also star.

The character dates back to 1941 in the comics; Momoa was briefly introduced as the seafaring loner with superhuman strength in Dawn Of Justice and then in a bigger role in Justice League.

Aquaman got its China release date in mid-October and leveraged that to get the word out locally. It’s still rare for a movie to debut in the Middle Kingdom ahead of domestic, but we have seen some examples of this before. Warner went hard on local promotion. Momoa, Heard and Wan all visited the market where WB is partnered with key online outlets and social media platforms including Weibo and WeChat.

The 25 minutes of footage that was shown early locally was met with enthusiastic social response which looks to be paying off now that the film has opened.

Aquaman has the distinction of being the first superhero movie WB has released during Christmas. BVS was a March/Easter movie, Wonder Woman played in summer and Justice League hit the domestic Thanksgiving corridor last year. The movie may benefit overseas from school holidays kicking in earlier while in China nothing much has made an impact recently in the wake of the outsize performance of Sony/Marvel’s Venom (which last week was granted an extended release so will still be playing this frame).

Looking back at the China comps for Aquaman, BVS in 2016 delivered the then-biggest opening day of all time for a WB film with $20M (RMB 128.7M). In the Middle Kingdom it finaled at $95.8M with the UK, Brazil, Mexico and Australia rounding out the Top 5 for an ultimate $543M international box office cume.

Wonder Woman’s China bow was $38.2M for its opening frame with $90.5M through the run. Her top markets were China, Brazil, the UK, Australia and Mexico, and her final offshore gross was $409.2M.

Justice League did $51.8M (RMB 343.8M) for the Middle Kingdom launch weekend, taking $106M there at final. The overseas total was $429M with Brazil, Mexico, the UK and Oz falling in line behind China.

Before North America on December 21, Aquaman next session swims to 40 more overseas markets including Russia, Brazil, Mexico and the UK. Another 28 will be added the following weekend including Korea and France. He heads Down Under on December 26 and goes to Italy January 1 and Japan February 8.

We’ll have more China updates throughout the weekend.