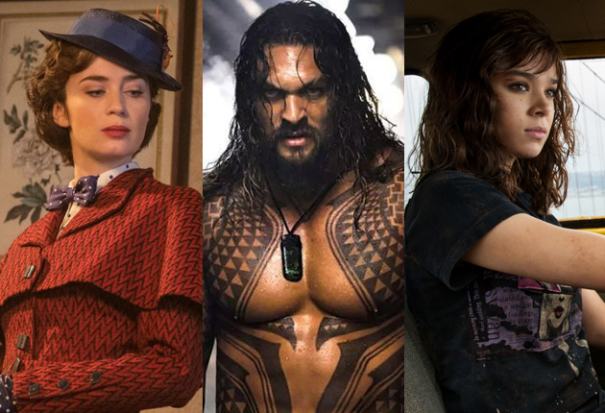 It’s the most wonderful time of the year at the box office, a time when ten wide releases in the marketplace carrying a combined near production cost of $900M will vie for business in a marketplace that one distribution source describes as a “game of chutes of ladders; there will be winners and there will be losers.”

The multiple factor is wild, and many studios, (if you’re not Disney with Star Wars) like to assess business over the long haul, with clicking turnstiles all the way through mid January. That’s not B.S. when you consider how Sony’s Jumanji: Welcome to the Jungle was able to excel in a Last Jedi-dominated marketplace last year, earning 58% of its $404.5M in the New Year. Ditto for 20th Century Fox’s The Greatest Showman which looked like it was dead with an $8M 3-day, $19M six-day, only to make 72% of its $174.3M domestic in 2018.

Currently there’s only 4% K-12 schools off today according to ComScore, but that number will grow to 32% by Friday, and 100% all next week up to Jan. 1. Currently there’s 69% colleges on break, a number that swells to 84% by Friday and 100% throughout the rest of the year.

Disney’s Mary Poppins Returns from Rob Marshall, the sequel to the 1964 musical from Chicago and Into the Woods director Rob Marshall and starring Emily Blunt and Lin-Manuel Miranda, is starting off gradually tonight in 125 Dolby auditoriums and will expand to 4,000 theaters tomorrow including 250 PLFs with an eye on a $35M weekend and a first week (Wednesday through Tuesday) of what many believe is closer to $75M. Currently Mary Poppins Returns is 78% fresh on RT. The thinking is that the movie will pull in most women, 8-80, and not really stand in the way of Aquaman‘s momentum. The sequel cost an estimated $130M.

Despite that early start, it’s Warner Bros./DC highly anticipated Aquaman which is taking the ‘must see’ spot of the season in the wake of Star Wars owning the year-end period for the last three years. Previews start Thursday at 5PM and will play in 3,300 locations backed with the strength of Imax. Projections are wild. Right now 3-day is at $65M-$70M. Yes, that’s lower than Justice League‘s FSS of $93.8M, but the thinking is that through five days, Aquaman will make more than its predecessor, $120M to $111.9M, over the Friday to Tuesday stretch. A few are saying $150M, but that’s a truly lofty number. Fandango reports that Aquaman is surging ahead of Wonder Woman in pre-sales, but again, that doesn’t mean folks will show up on the weekend, rather Christmas. Wonder Woman opened to $103.2M. Aquaman currently has a 69% Fresh score on Rotten Tomatoes. The pic cost $200M net, and has grossed north of $266.4M at the overseas box office with China repping 71% of that figure. Amazon Prime previews on Saturday night stateside earned $2.9M for the DC pic. Aquaman, is technically ashore and off to a great start.

Already strong in the mix is Sony’s $90M animated production Spider-Man: Into the Spider-Verse which made $2.7M yesterday taking its four-day take to $38.1M. With a three-day of $35.3M, it’s the biggest animated weekend opener for December beating Illumination/Universal’s Sing from two years ago. Three-day is looking at around $23M, down about 35%. The pic could easily stand at $65M before Christmas.

Paramount’s Bumblebee is a wild card with the best reviews of any Transformers at 97% fresh. It’s a complete reboot of the franchise sans Michael Bay in the director’s chair with an E.T. like story starring around Hailee Steinfeld’s teen character. Give the weight of the franchise product in the marketplace, projections are low for this $102M production (before P&A) with a $20M-$25M three-day at 3,500 theaters and a Friday-Tuesday take between $35M-$40M. Previews starts at 5PM on Thursday. Around 325 theaters have already generated around $500K for Bumblebee from a Dec. 8 evening preview.

On the low side, there’s STX’s Jennifer Lopez romantic comedy Second Act and Universal’s Robert Zemeckis’ $40M-priced fantasy drama Welcome to Marwen. While Second Act will likely file between $10M-$13M over five-days, the pic was really cheap at $15.7M before P&A. STX is targeting women 25+, and the film which carries a 57% RT score was never expected to be No. 1 in a the brand-heavy Christmas market. African American and Hispanic demos could push this title to overindex. Marwen will be an upset for Universal after last weekend’s blow with Mortal Engines which is set to lose north of $105M. Projections are in the high single digits over five days for this film which many Oscar prognosticators have passed over. No RT score yet.

On Christmas Day, Sony has the PG-13 Will Ferrell & John C. Reilly period bawdy comedy Holmes & Watson which could see an opening day’s take of $5M. The pic cost around $42M.  Annapurna’s Vice from Oscar-winning filmmaker Adam McKay which stars an invisible Oscar winner Christian Bale as former Vice President Dick Cheney is launching at around 2,350 with an eye on an opening day of $4M off an RT of 67% fresh.