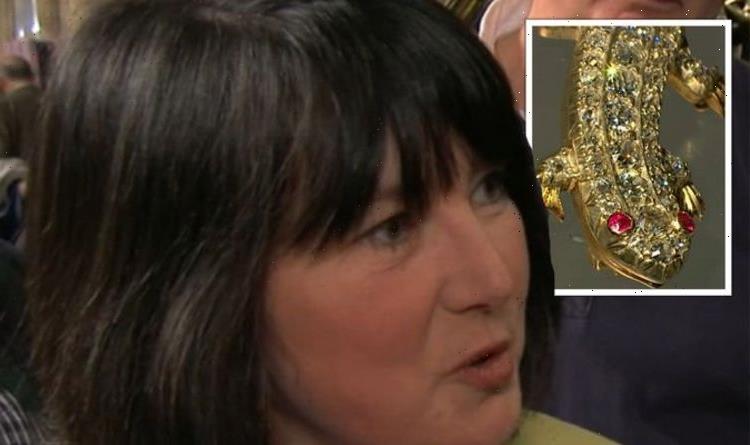 During an episode of Antiques Roadshow, BBC presenter Fiona Bruce took viewers to Beverley Minster in the East Riding of Yorkshire. Amongst the objects caught on camera were a pair of valuable medical leech jars once used to bleed patients, a curious sideboard that hid secret drawers, and a ring with a locket containing the hair of Napoleon Bonaparte. However, it was a brooch that caught the eye of antique expert Susan Rumfitt.

Susan began by asking the guest how the item came into her possession.

“My grandfather bought it for my grandmother as a wedding present in 1919,” she began.

“The engagement ring was apparently not very special.

“He was a prisoner of war in the First World War and when he came back he was very ill.”

The guest continued: “I don’t think he had enough money to buy her a really nice ring.

“And so he bought her that on their wedding day to make up [for it], and she always wore it.”

“That’s such a lovely and romantic story,” Susan replied as she explained where the brooch came from and where it was made.

“It dates back to about 1890 and it is set with diamonds and little rubies.”

The expert added: “It’s fabulous. It sparkles and the Romans associated salamanders with wedded bliss.

“So, hopefully, they did have wedded bliss all the time.”

Susan went on to ask the guest whether she knew how much her grandfather had paid for the brooch at the time.

“It certainly was,” Susan replied before going on to value the item.

“That’s lovely,” the guest replied as she explained she refused to sell it.

“I hope she enjoys it as much as your grandmother did,” the expert concluded.

Elsewhere in the episode, expert Ben Wright left one guest lost for words over the valuation of his Patek Phillipe watch.

The watch, which was once owned by the guest’s grandfather, was given the item as a birthday gift from his dad.

Ben valued the vintage watch at a staggering £6,000.

Who is Nick Sandmann and what is he doing now?