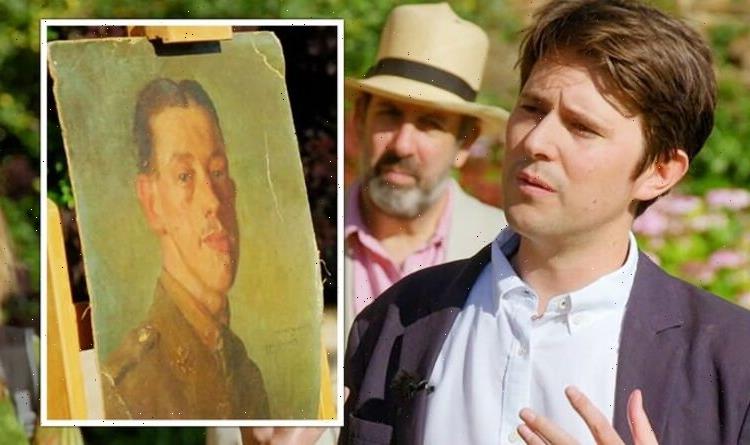 The art historian was presented with a “high quality” portrait of a soldier which was painted during the First World War by an artist who became a prisoner of war. The Antiques Roadshow guest who wanted Lawrence to inspect the portrait on a recent episode of the BBC One programme admitted he found the oil painting in a skip and felt it “had to be saved” from going to a landfill site. While Lawrence admired the work which had gone into the portrait, he had no idea what the soldier’s name was.

When the expert asked his guest how he became the owner of the painting he brought onto the show he revealed he found the artwork in a skip in 1980.

The guest explained: “He [the solider] was looking out of a skip and he just had to be saved.

“He was obviously a painting of a real person and we just could not let it go to landfill or whatever, so we fished it out.”

The painting was a portrait of a young man dressed in the uniform of a British Army officer.

Lawrence took a closer look and said: “On the left here we have inscriptions which might help us out here.”

Written on the painting was the name G Goddard Jackson and Crefled 1917.

He said: “The first inscription is the name of the artist Gerald Goddard Jackson and he was a painter who was born in Duddington, in Northamptonshire, and then studied at the Slade School of Fine Art which was one of the most prestigious places to study art in London.”

After a brief period of travelling around Italy he went on to join the Army, Lawrence revealed.

The guest then discovered the artist was captured during the First World War in 1916 which is when this portrait came into the story.

He continued: “This was painted when Goddard Jackson and presumably this officer here were prisoners of war in Crefeld, which was a city, what is now the German state of North Rhine-Westphalia.”

After learning the information the guest wondered how the artist would have obtained the canvas and the oil paint needed to create the portrait.

However, Lawrence explained: “As a rank of an officer they would have been allowed certain things that other privates wouldn’t have been.”

He admitted it was always “so difficult” to identify the sitters in portraits such as the one in front of him.

“Unless they were prominent, they may have only been painted once, there may not be any photographs of them out there in the public domain,” Lawrence admitted.

“And so we haven’t been able to really identify who this subject is, sadly, but of course it also makes you wonder why or who threw it away.”

However, the expert explained: “There is one glimmer of hope here and that is that this paint has been relined and what that means is it has been cut away from the wooden stretcher and then it was laid onto a thin piece of cardboard.

“Now, possibly, if you were to get that cardboard removed you might find an inscription on the reverse that gives you the name of this subject.”

Lawrence praised the paintwork and then valued the item at between £600 and £800 if the guest was to sell it at auction.

Antiques Roadshow episodes are available to watch on BBC iPlayer.