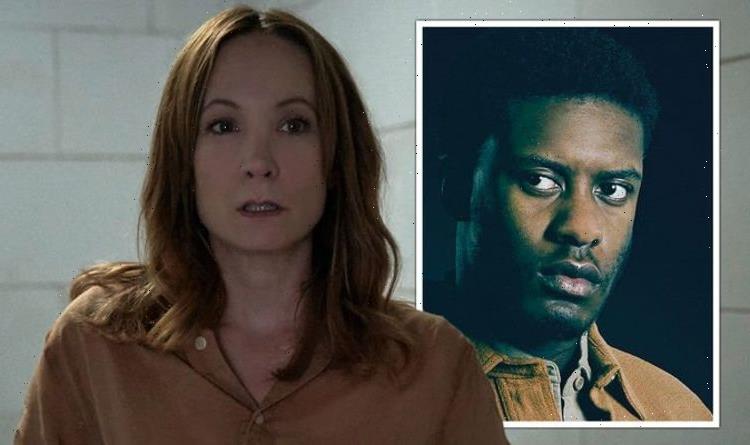 Angela Black fans will be tuning in for the new episode of the hit ITV drama on Sunday night to watch the titular character attempt to escape her abusive husband. Previously in the series, viewers saw Angela (played by Joanne Froggatt) cross paths with a mysterious individual named Ed (Samuel Adewunmi). While Ed has insisted he’s here to help Angela escape her husband, many viewers have grown suspicious of him. Could Ed be about to betray Angela as he pulls off a shocking double cross?

In a recent interview with Express.co.uk and other press, Angela Black Executive Producer Sarah Hammond opened up about the character of Ed.

She detailed how Angela’s relationship with Ed may change as the series goes on.

“Without giving too much away, obviously that does shift and change,” she revealed.

Could this be a sign Ed is going to double cross Angela in an upcoming episode of the series?

Samuel Adewunmi also opened up about suspicions surrounding his character, noting: “There’s an air of mystery about him.”

However, he hinted that this could change as viewers reach the end of the series.

The actor made it clear he’d enjoyed portraying Ed’s mysterious side, highlighting that he had a “specific sort of secret”.

Samuel explained: “I think the part that he plays is pivotal to Angela’s journey and so he’s probably going to affect how we see everyone within the grand scheme of the show.

“Yeah, I don’t know, I don’t really have any hopes for him. I just hope they take him in and they see him for who he actually is.

“I think that’s all I can say right now,” the actor added, being careful not to spoil the plot.

Could this “secret” Samuel mentioned be that Ed is a double agent and actually working for Angela’s husband?

Elusive Ed may have been hired by Olivier Black (Michiel Huisman) to incriminate Angela, in a bid to make her lose custody of their kids if she filed for divorce.

Fans of the ITV drama have been sharing theories about Ed on Twitter, with many believing he’s going to double cross Angela.

“#AngelaBlack It’s going to be a double bluff isn’t it? The guy trying to ‘help’ her will be setting her up & gathering evidence that she’s plotting to kill her husband… Maybe he’ll kill him as revenge for something but she’ll get the blame. Sorted. #spoilerwarning,” @libertypup predicted.

“Ed is part of setting Angela up. Angela will be charged with the girl in the office’s murder & Ed will be Olivier’s witness, saying she called him, took him to the murder location & so on. She has no back up & the children will swear she covered up the bunny’s death! #AngelaBlack,” @David76866940 theorised.

@AnnyTrish commented: “Don’t trust this Ed guy one bit. He’s definitely no innocent bystander here. Think she should be just as suspicious and careful of him, as she is of her abusive husband #AngelaBlack.”

@Ioan_Juan said: “I think #AngelaBlack is being set up by her husband through Ed. Olivier is trying to get his wife to put a hit on him so she gets locked up, without custody of the kids.”

“I keep thinking Ed is still working for Angela’s husband with the aim to set her up #AngelaBlack,” @GinsideStorry wrote.

Will Ed really betray Angela and help Olivier set her up? Viewers will have to tune in to find out.