Home » TV & Movies » America's Got Talent: The Champions Week 5: Jackie Evancho and More Return — Who's Going to the Finals? 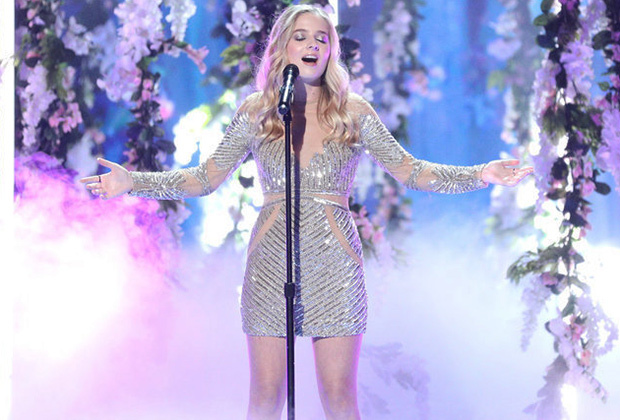 America's Got Talent: The Champions Week 5: Jackie Evancho and More Return — Who's Going to the Finals?

Only two more spots remained in the finals atop Monday’s episode of America’s Got Talent: The Champions, which brought 10 of the franchise’s most popular acts back to the stage for one last shot at glory.

1. ATTRACTION | Champions‘ fifth episode kicked off with a stirring performance from shadow theatre group Attraction, the winner of Britain’s Got Talent Season 7. Set to the tune of OneRepublic’s “I Lived,” the group told an emotional, multi-generational story about coming to America, starting a family and achieving your dreams — all the while using their bodies to form incredible shapes, including the Liberty Bell, a bald eagle and even a car. It was simply breathtaking from start to finish. Where’s my Golden Buzzer?!

2. JACKIE EVANCHO | Eight years after competing on AGT, the Season 2 runner-up — now a platinum-selling recording artist — the 18-year-old opera singer lent her voice to a powerful rendition of “Music of the Night” from Broadway’s The Phantom of the Opera. The judges unanimously agreed that Evancho’s voice has gotten even better in her post-AGT years, calling it simply “amazing.”

3. COLIN CLOUD | Simon Cowell told the AGT Season 12 semi-finalist that he “deserved a second chance,” which he finally got on Sunday. Making good use of his time on stage, Cloud channeled his childhood hero — Sherlock Holmes, the ultimate mentalist! — to do something I can’t even begin to comprehend. He had Howie Mandel guess a letter and a number, which turned out to be where a surprise celebrity guest (former AGT host David Hasselhoff!) was seated. Prior to this reveal, a random audience member was asked to name the first celebrity they could think of… and guess who they picked! Honestly, this was some straight-up black magic.

4. LOST VOICE GUY | Lee Ridley, the stand-up comedian with cerebral palsy who won Season 12 of Britain’s Got Talent, had the audience in stitches with a routine about his disability and how it affects the way people perceive him. “I’m not here to inspire you,” he said. “I’m here because I love the attention.” Cowell was so thrilled to see the BGT alum, he even snuck backstage to seal the reunion with a hug.

5. SAL VALENTINETTI | AGT Season 11’s fifth-place finisher (aka Heidi Klum’s “golden boy”) came ready to redeem himself, which he attempted via a swingin’ performance of “Jack the Knife.” The judges enjoyed what they saw — and even if this is the end of the road for him on AGT, at least he has that Sunday dinner with Terry Crews to look forward to.

6. TOKIO MYERS | What began as a simple piano performance of “Clair de Lune” evolved into a full-blown orchestral fantasy, courtesy of Britain’s Got Talent’s Season 11 winner. The judges were entranced by Myers’ unique presentation, with Cowell urging the 50 states to make Myers one of this week’s two acts sent through to the finals.

7. KSENIYA SIMONOVA | The winner of Ukraine’s Got Talent‘s first season came to represent the beauty of her home country through sand art. Her performance, which told the story of  “a child who grew up, became a famous artist and forgot their parents,” was as heart-wrenching as it was mind-blowing. In fact, Terry Crews was so moved by Simonova’s display of talent that he stormed the judges’ panel and hit the Golden Buzzer himself.

8. COSENTINO | This escape artist/illusionist, who placed second in Australia’s Got Talent‘s fifth season, arrived at AGT: The Champions determined to make a name for himself Stateside. Not only did his death-defying display get the judges on their feet, but Cowell truly believed that he had a real shot at making it through.

9. SONS OF SERENDIP | The arrival of this musical quartet, which placed fourth in AGT‘s fifth season, marked yet another significant change of pace — and a glorious one at that. The four men’s voices and instruments blended beautifully to deliver a “dreamy, angelic” take on Keane’s “Somewhere Only We Know.”

10. SHIN LIM | AGT saved one of its best-known winners for last, as Season 13 winner Shin Lim ended the final night of auditions with a trick so incredible that Crews ended his turn on stage by bowing at the magician’s feet.

With Simonova already buzzed through, only one spot remained in the finals. And after tallying all of the 50 states’ votes, that spot went to Shin Lim. (Sons of Serendip came in third, while Attraction placed second.)

There you have it, folks: We now know all 10 finalists competing in the Champions finale. Which act will you be rooting for? And which of tonight’s auditions impressed you the most? Cast your vote below, then drop a comment with your thoughts.