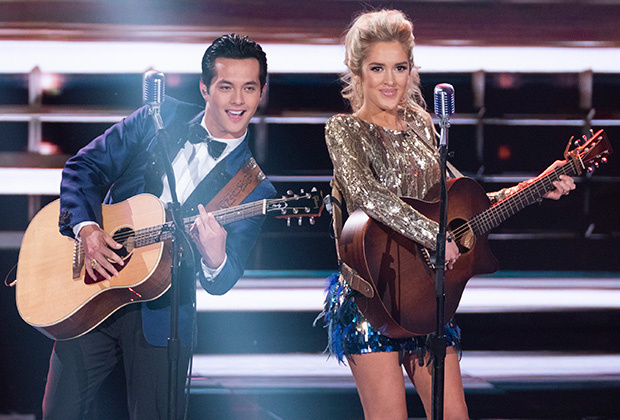 American Idol‘s remaining eight finalists took on some of Queen’s greatest hits on Sunday, and by the end of the night, only six were left vying for the throne. But eight solo performances do not a two-hour event make, so Idol‘s final eight were also paired up for a series of (mostly successful) duets from other artists.

Before we get to the results, let’s break down all of tonight’s performances…

WALKER BURROUGHS, Queen’s “Crazy Little Thing Called Love” | Following his “tremendously awkward” practice with Adam Lambert — who, in Burroughs’ defense, did look like a pirate — real-life Archie Andrews took the stage for a performance that was… just as awkward. The vocals were fine, but I was too distracted by the dad moves to appreciate them. We’ve seen Burroughs make magic at the piano, so I’m not sure why the show is forcing him to cheesily strut around the stage in an attempt to be something he’s not. The judges keep stressing “authenticity,” but I’m starting to wonder if they even know what that means anymore. Grade: B

MADISON VANDENBURG, Queen’s “The Show Must Go On” | Lambert immediately zeroed in on VanDenburg’s only notable fault — her inability to convey emotion in her performances — and she promised to take his advice to heart. That said, I wouldn’t exactly say she kept her promise, as she smiled her way through what is clearly a dramatic ballad. Technically speaking, this was an impressive performance, but if the goal is to improve, I wouldn’t say VanDenburg quite hit the bullseye. (Or as Katy Perry clumsily put it, “You still have a little far to go.”) And I’m a little irked by the disconnect between what the judges want (hair flips!) and what the show is giving us (aka literal nails in VanDenburg’s hair). Grade: A-

LAINE HARDY & LACI KAYE BOOTH, Johny Cash’s “Jackson” | The force was definitely with these two tonight… and by that, I mean the chemistry they allegedly exhibited during their duet couldn’t have been more forced. And Perry certainly towed the company line by suggesting that Hardy’s big smile was a result of his singing partner. (“Watch out, Maddie and Caleb!”) All snark aside, the performance was solid — so why overshadow the talent with some phony romantic angle? You’re better than this, Idol. (Or not.)
Grade: B+ (Click here to watch!)

JEREMIAH LLOYD HARMON, Queen’s “Who Wants to Live Forever” | “I’m going to sing with my heart, and whatever that looks like, it’s going to be beautiful,” Harmon said after his rehearsal with Lambert, and boy did he make good on that promise. This was the first song of the night that really took us on a journey, one that began simply and crescendoed into something really powerful. Lambert was right when he asked Harmon to rethink using a guitar; it really felt like he was baring his soul on that stage. The fact that his parents were in the audience — and loved the performance! — was merely the icing on the cake. Grade: A

ALEJANDRO ARANDA, Queen’s “Under Pressure” | As he is wont to do, Aranda put his own spin on this classic Queen jam, admitting in rehearsal that he worried he might be changing things up too much. Come performance time, though, it was clear he had nothing to worry about, giving us a surprisingly calming rendition of a song about being crushed by the weight of your own stress. He even gave us a hint of a guitar solo, making this a true Aranda performance. Grade: B+

WADE COTA & ALYSSA RAGHU, Marvin Gaye and Tammi Terrell’s “Ain’t No Mountain High Enough” | First of all, how dare Bobby Bones say that most people know this song from Guardians of the Galaxy? He had so little screen time tonight. Why did he have to go and ruin it by saying that? Anyway, this unlikely pairing gave us a pretty decent performance, even if the background singers completely drowned them out during the chorus. Grade: B-

MADISON VANDENBURG & JEREMIAH LLOYD HARMON, “A Million Dreams” from The Greatest Showman | This was probably my favorite duet of the night, and not just because it felt like a premonition of the season’s final two. He overpowered her a little, which I wouldn’t have expected, but when they were on, they were on. (I’m not sure what “beautiful dance of respect” Perry was watching.) Grade: A

LAINE HARDY, Queen’s “Fat Bottom Girls” | “Your voice is fine, have some fun” might be the best piece of advice anyone has given Hardy all season. (The actual best advice would be to drop that “party with a Hardy” nonsense.) And I actually think Hardy took Lambert’s words to heart, both in his interactions with the audience and in ensemble. (I can’t imagine a social event in which those sparkly gold shoes would be appropriate, but I still want them.) Grade: B

LACI KAYE BOOTH, Queen’s “Love of My Life” | I really only have one word after that performance: YES! … OK, maybe a few more: From those smoky vocals to the intimate bond she formed with the audience, this really was Booth at her absolute best. And don’t even get me started on the outfit, a fitting look for a budding country queen. In fact, I’d like to edit one of my earlier statements; I’d very much like to see Booth in this season’s final two. (I also appreciated Booth shooting down Ryan Seacrest’s inquiry about whether she’s thinking about a certain someone while singing. Can’t a girl just be talented without this show trying to anchor her to some guy? Telling Bones that she’s proud to represent “all the small-town girls” was also a nice touch.) Grade: A

ALEJANDRO ARANDA & WALKER BURROUGHS, Simon & Garfunkel’s “Mrs. Robinson” | Assuming it gets released, I’d love to hear the studio version of this duet. Aranda and Burroughs’ voices blended nicely, and the bones of a potentially great performance were definitely there, but something kept it from being truly exceptional — even if it did end on a lovely little harmony. Grade: B

WADE COTA, Queen’s “We Are the Champions” | Coming to bookstores this summer: Are You There, Falsetto? It’s Me, Wade. … OK, now that I’ve had my fun, this performance really wasn’t that bad, even if I raised my eyebrow at the arrangement a few times. And even though he flubbed a lyric. (Kudos on powering through, I guess…?) Grade: C+

ALYSSA RAGHU, Queen’s “Somebody to Love” | Given the tepid reception she’s gotten from America thus far, I feel like Raghu really needed a win… and this wasn’t exactly it. Sure, she exuded natural confidence on stage, and the vocals were mostly solid. But the fact that Lionel Richie’s only critique was that Raghu shouldn’t lose her determination pretty much said it all. Grade: B

Results time! After America’s vote, the following contestants were marked as safe: Jeremiah Lloyd Harmon, Laci Kaye Booth, Madison VanDenburg, Laine Hardy, Alejandro Aranda and Wade Cota, leaving Walker Burroughs and Alyssa Raghu in jeopardy. Sadly, the judges chose not to save either of them, sending both Burroughs and Raghu home.

Your thoughts on this week’s elimination? More videos will be added when they become available. In the meantime, vote for your favorite performance(s) in our poll below and drop a comment with your thoughts on the results.

Athletics: Mo Farah has Haile Gebrselassie row regrets but sticks 'by every word I said'