Home » TV & Movies » Amazing Race Recap: Then There Were Four — Whose Race Came to an End?

Amazing Race Recap: Then There Were Four — Whose Race Came to an End?

Are Natalia and Arun the luckiest team in Amazing Race history? That, my friends, may be up for debate, but let’s make this clear: We are here for them.

Last week, even host Phil Keoghan couldn’t recall another duo whose been given this many chances throughout the competition. Despite the fact that it took a massive global pandemic for them to get their second shot, we’re just glad to see this happy-go-lucky father/daughter duo still in the running. But did their luck run out Wednesday when the Race trekked to Greece? Let’s recap from the top and find out.

Teams depart the French island of Corsica to head east to Thessaloniki, Greece, where they must drive themselves to an olive grove to search for their next clue. And though the cars they’re provided with have a stick shift, there aren’t any massive, stress-induced freak outs… this time.

Kim and Penn are first to find the Route Info, which tells them to drive to Nea Gonia for their next clue, but the flight attendants are right behind them. Like clockwork, Natalia and Arun are fretting the navigation portion of this leg.

ROAD BLOCK | In “Who Wants to Wrap?” players must put together a plate of 60 dolmades using rice, veggies, spices and grape leaves. While Dusty tells us his “Colorado extracurricular activities” are surely going to help him out, Kim realizes that half of her leaves are wrongly wrapped and arranged. She fixes her mistakes and becomes the first player to get the next clue.

Dusty’s experience in rolling a different kind of green nabs him his clue, while Raquel is busy fastening her seatbelt on the Struggle Bus. Her missteps allow Arun and Natalia to leave the flight attendants in their dust. 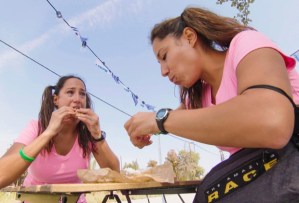 ROUTE INFO | Teams must now race to Mamo’s Cantina stand, where they must spell the word “souvlaki,” grab some eats and figure out that their next clue is hidden in the wrapper. Kim and Penn arrive to the food truck first, and Kim nails the spelling bee. They eat their entire souvlaki sandwich… and then throw their wrapper away! Penn figures it out, and off they speed toward St. George Church.

Raquel and Cayla make up a lot of time, beating both the twins and the father/daughter duo to the truck. Natalia and Arun, however, have no flippin’ clue how to spell “souvlaki,” so they head off to seek help from a nice Greek gentleman. As they scramble, the twins find the Pit Stop before they find Mamo’s!

ROAD BLOCK | The YouTubers continue leading the pack, arriving first to the Road Block. In “Who Wants to Be Iconic?” teams must correctly identify five saints in the right order after listening to a priest’s sermon. Penn’s ADHD gives him a sense of hyper-focus, which he says can really help him absorb information. When he takes his first quiz, he miraculously passes on the first try! (Seriously, that looked hard.) And with that, Penn and Kim are Pit Stop-bound!

Ryan stops listening to the priest after the fifth saint description, not knowing that the lecture is muuuch longer than that. On his second lecture, he’s joined by Cayla, and both racers realize they’re going to be there for a while. As they try to stay awake through their theology lesson, Natalia catches up and joins them.

But back to Lulu and Lala. They don’t know how to spell the cuisine, so after asking a stranger to Google it, they head back to chow down on their souvlaki. But they don’t realize the clue is on the wrapper, so they order and eat a second one in the process. (Honestly? I’m not even mad. It looks delicious!) It’s not looking good for the twins in pink, as we see Ryan and Dusty complete their test and race to the finish line.

PIT STOP | Unsurprisingly, the married couple arrives first to Nea Kallikrateia, winning $7,500 a piece! (Plus, it’s their third win in a row for those keeping score.) Raquel and Cayla place in second, with Dusty and Ryan coming in third. Last to the mat, however, are Lulu and Lala, and unfortunately they’re eliminated from the race.

Are Kim and Penn unstoppable? Happy to see Natalia and Arun live to fight another day? Let us know your thoughts by dropping a comment below.