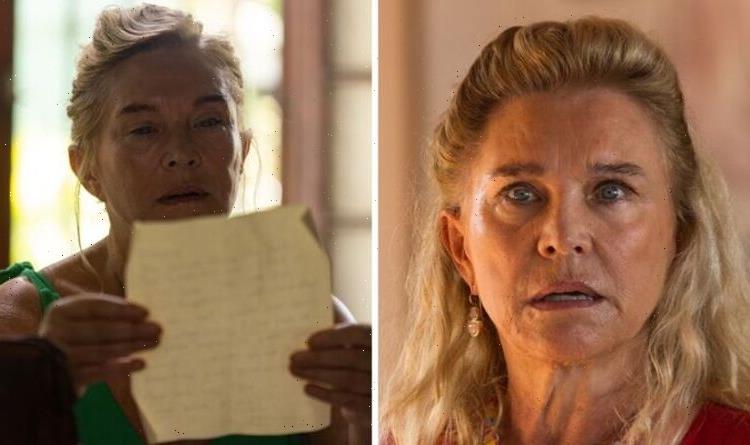 The Good Karma Hospital finale aired last Sunday and left viewers on the edge of their seats as season four came to an end. Greg McConnell (played by Neil Morrissey) and Lydia Fonseca’s (Amanda Redman) wedding was interrupted as three medical emergencies made their way to the hospital. Dr Ruby Walker (Amrita Acharia) was battling a decision to stay at the hospital or leave to take care of her father before ex-lover Gabrial Varma (James Krishna Floyd) returned to declare his love for her. The fourth series of the ITV hit drama was filmed in Sri Lanka during the coronavirus pandemic, and Amanda revealed she felt nervous before filming began.

Speaking exclusively to Express.co.uk and other press, Amanda opened up on the different conditions that were in place when filming the fourth series.

She said: “Well, I mean, I had a little bit of trepidation before I went out there because I just couldn’t imagine what it would be like.

“But actually, in my view, it was the happiest time I have spent there because we were a bubble within a bubble, so it was just us in this hotel, and we did become this family.

“We became incredibly close, we knew each other very well anyway, but I think we got to know each other so well.

“We ate together every night unless somebody wanted to go off and do their own thing, but there was a big long dining table, almost like being at boarding school.

“And we would have meals outside, we’d do a five o’clock swim when the waves we lovely and gentle because I’m a scaredy-cat and we just got incredibly close it was lovely, I really enjoyed it,” she explained.

During the first episode, Dr Lydia and her team face the Nipah Virus, which was a slight nod to the coronavirus from writer Dan Sefton.

Touching on that small element, Amanda said: “I think it was clever that they did that, but it wasn’t COVID.

“I think most people are over that now, really, but it was great to show some empathy with what people have been going through.”

Amanda has played Lydia since the series first aired and was asked whether she has learned more about the medical world with each series.

She joked: “I mean, I think inevitably you do learn a little bit of information, so I can fool my friends and say ‘Oh tell me your symptoms and I’ll give you a diagnosis’.

“I’m fascinated, and then they’ll say some long Latin word, and I’ll go, ‘I know what that means so, it’s great, it’s really interesting, and I love the operations because I love getting stuck in.”

In the final episode of the season, time had finally come for Lydia and Greg to get married, but she still had doubts as to whether it was the right decision.

As Ruby and Gabriel returned to the hospital, Lydia left Greg at the altar to go take charge of the chaos, leaving him to feel like she didn’t want to get married at all.

After assigning doctors and giving her orders, Lydia returned to Greg, but he found a letter from her ex-husband, leaving him devastated and left Lydia to deal with the injuries.

Overcome with anger, Bharat took a blade to the neck of the truck driver who caused the crash.

Niki Sharma (Rebecca Ablack) got caught in the crossfire, and Greg had to save both lives as Lydia watched on, frightened at the thought of losing Greg.

Ruby also made a decision as to whether she wanted to give things a go with Gabriel or walk away forever.

The Good Karma Hospital Series 4 is available to watch on ITV Hub.

Twelve Victorians die, including four children, after waiting for triple-zero to pick up