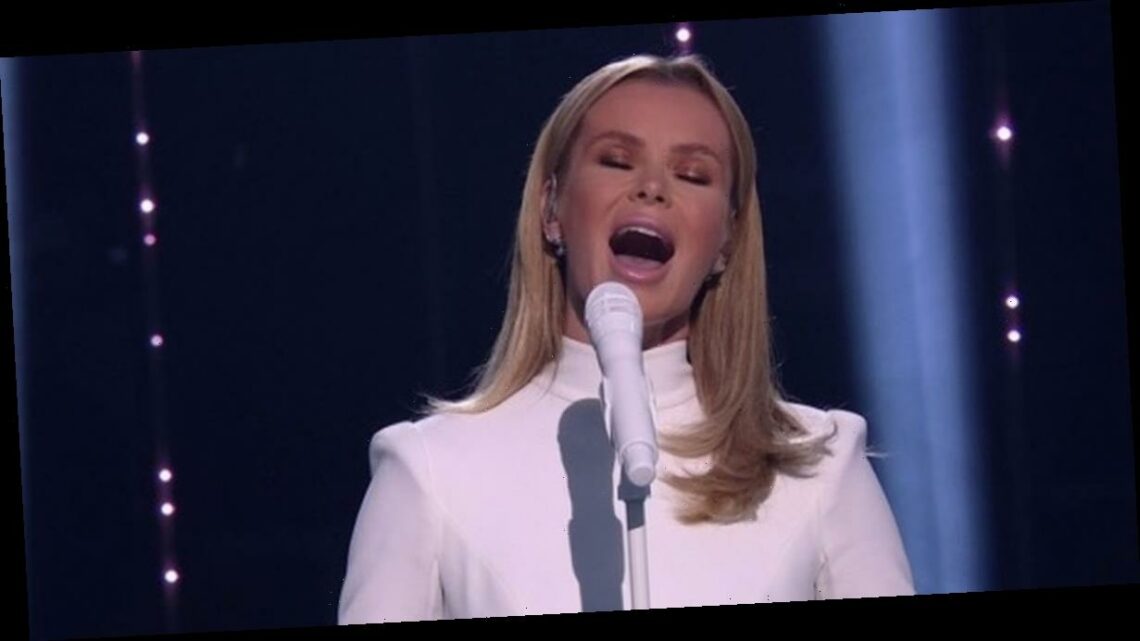 Amanda Holden was met by a standing ovation on Saturday night's Britain's Got Talent, as her fellow judges stood to applaud her moving performance.

The 49-year-old swapped the judging panel for the stage once each of the BGT semi-finalists had performed, singing a track from her debut album.

Titled Not While I'm Around, the uplifting song is a cover of a track from Sweeney Todd, and has been sung by fellow songstresses such as Barbra Streisand in the past.

However, watching the performance from home, certain viewers accused the BGT star of miming – claims which ITV have firmly denied.

Over on Twitter, certain fans of the talent show took to their keyboards to debate Amanda's vocals, and while most were hugely impressed, some felt the song had been pre-recorded.

One penned: "She looks beaut but def miming! She must have pre recorded it live and then they've auto tuned it for her to mime to."

"Miming at its best," agreed a second.

In a statement shared with Mirror Online, a BGT spokesperson stamped out any speculation, confirming Amanda had sung the breathtaking track live on stage.

It read: "Amanda was not miming on tonight's fantastic and enchanting BGT performance."

However, the majority of viewers were quick to praise Amanda's talent, as she filled the arena with a powerful performance of the melody.

One gushed: "Amanda has a beautiful voice."

"OK, Amanda has such a gorgeous voice.." added a second, while a third wrote: "Aaaaaaand I also quite like @AmandaHolden singing. Didn't sound like miming to me folks. Studio versions lovely anyway."

Amanda's debut album, Songs From My Heart, was sold out upon release on Friday, as she admitted to feeling "nervous" prior to the album launch.

Featuring tracks such as With You and I Dreamed A Dream, Amanda delved into a personal place while recording the album.

Opening up about the inspiration behind the vocals, she told her fans: "People think they know who I am because they see me being loud and outrageous on the television or radio.

"That is a part of me but really I'm all about my family. This album is all the songs I've loved in my life sung for the people who mean the most to me. It's a very emotional album that everyone can relate to.

"I had a tape recorder as a little girl and would sing into it dreaming of this moment."

She finished: "There is a story behind every song on the album celebrating life, love and loss – the darkest and happiest moments in my life so far. It is literally my heart laid bare."