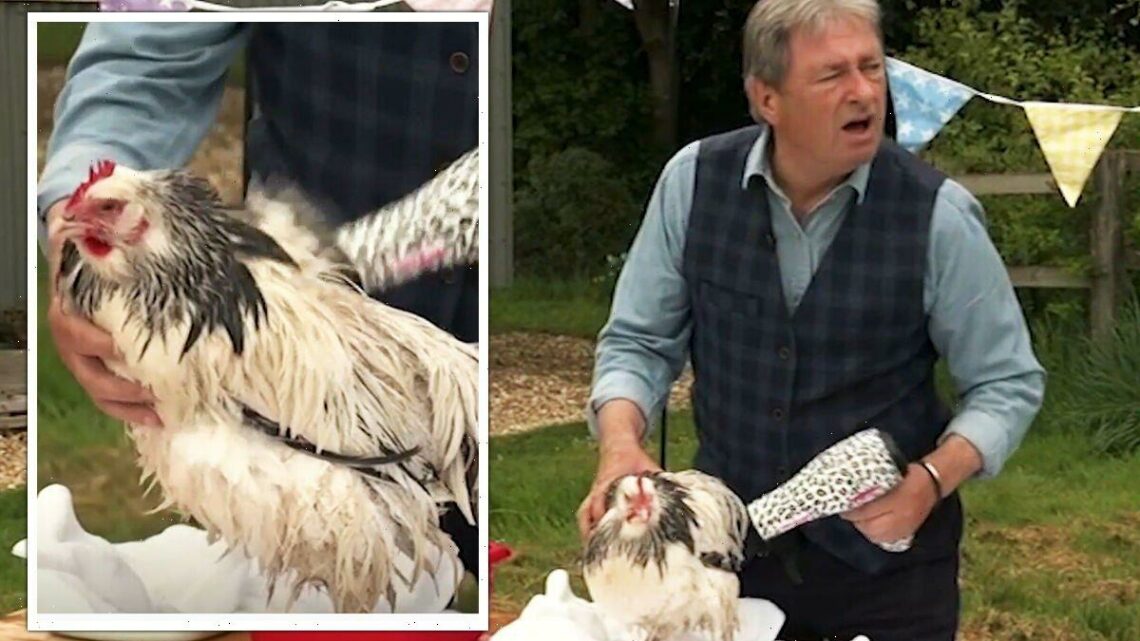 During the latest episode of Love Your Weekend with Alan Titchmarsh, the green-fingered presenter was tasked with pampering a hen called Pauline. He was joined by famous farmer Tom Davis who explained the importance of using a hairdryer to “fluff up” feathers so the chickens could be ready for showing. However, hairstylist to the stars Mark Hill was not impressed his hairdryer was being used on birds and branded the segment a “fail”.

Mark, who has styled Hollywood stars including Sandra Bullock, Michelle Pfeiffer and Kate Hudson was stunned to see Alan use his leopard-patterned hairdryer on a hen on the ITV programme on Sunday.

The pair demonstrated how to get the birds ready for showing, which included shampooing and blow-drying their feathers to fluffy perfection.

Tom revealed the chickens were “exhibition” hens, which are slightly larger and more fluffy than the birds bred for egg and meat production.

Alan was instructed to wash Pauline with a special blue shampoo which helped brighten her feathers.

Ahead of giving the birds a blow-dry, Tom said: “Before we begin we need to make sure our hairdryers work.

“And then what you need to do is sort of gently go the wrong way up the chicken.”

Alan, who started using the hairdryer, quipped: “We have to go the wrong way up their feathers.”

Tom explained blow-drying their feathers in the opposite direction gives the chickens “quite a bit of volume” and makes them look a lot bigger.

As Alan continued to dry his hen, he asked it: “Are you all right Pauline?”

However, celebrity hairstylist Mark branded the blow drying a “fail”.

The Mark Hill TikTok account reposted the clip and captioned it: “When you spend months designing a hairdryer just for it to be used to dry a chicken. Fail. Thanks, Alan.”

Sara Clifford-Gray joked: “How depressing is my life? I am sitting watching Alan Titchmarsh blow dry a chicken on telly!”

Diane commented: “I am eating an Activia yoghurt and watching Alan Titchmarsh blow dry a chicken. Middle age does NOT get better than this!” (sic)

@Appehmichael added: “Alan Titchmarsh is currently shampooing and blow-drying a chicken on ITV.”

Love Your Weekend airs on Sundays at 10am on ITV.

I’m a size 3X – I spent $120 on SKIMS but none of the clothes fit, they looked like they were made for dolls
World News