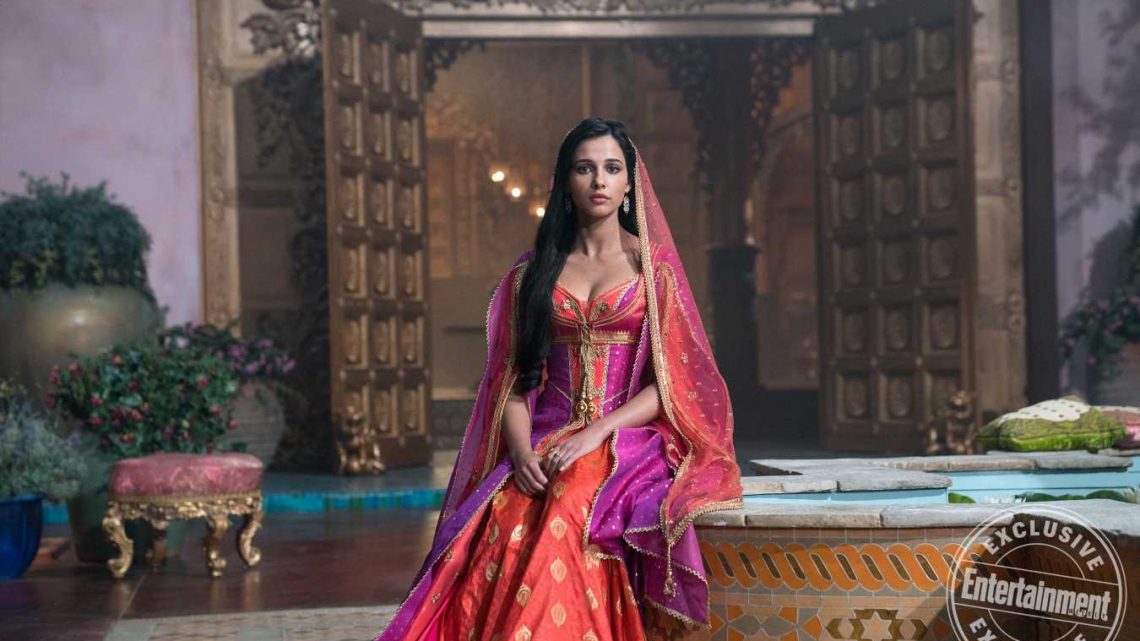 Princess Jasmine has always been synonymous with her vibrant turquoise crop top and harem pants that she wears throughout Disney’s 1992 animated classic Aladdin. But when Jasmine is brought into the live-action world, portrayed by Naomi Scott in Guy Ritchie’s remake in theaters May 24, it opens up a whole new wardrobe and a more modern look for Agrabah’s princess.

As part of EW’s Summer Movie Preview, Scott and costume designer Michael Wilkinson broke down the ideas, motifs, and silhouettes behind some of Jasmine’s new outfits that they conjured up for key scenes.

“The main conversation is structure versus freedom that I think is obviously is the metaphor for her journey as a character,” Scott tells EW. “If she’s wearing something that’s structured and beautiful, it can’t just be the sake of it looking great, it needs to be connected to the story.”

The film features around 10 new outfits for Jasmine, all of which trace the arc of her story. For scenes where Jasmine feels the burden of her sense of duty and her responsibilities, her gowns tend to be more detailed, corseted and restrictive, while in scenes where she starts to feel more freedom, the outfits become looser and more free-flowing.

“When you’re designing the costumes for a live action film that’s based on animation, there’s an opportunity to take these characters and give them literally more depth and details, really think about them as fully-fleshed people with complex psychologies and interesting personalities, so it was wonderful to explore who Jasmine really was and be able to express that through her many costumes in the film,” Wilkinson says.

The costume designer took influences from numerous sources to create culturally accurate and authentic creations for Jasmine, often drawing homage to Scott’s own Indian heritage. He said he took inspiration from the original “A Thousand and One Nights” stories that Aladdin was drawn from, as well as leaning to the idea that Ritchie’s Agrabah is a port city based on the East-West crossroads of Arabia, thus making it a melting pot of Arabian, Indian, and Asian cultures.

“The film is a celebration of the beauty of Arab culture,” Wilkinson adds. See the exclusive images and details of Jasmine’s wardrobe below.

Jasmine’s iconic turquoise crop top and harem pants are in the canon of Disney princess costumes, and Wilkinson and Scott knew they had to do them justice. Wilkinson updated the look with a flesh-colored bodice and flowing pants embroidered with crystals and gilded peacock feathers.

“We talked a lot about the iconography and imagery that would be relevant to the character and we really love the idea of this peacock motif,” Wilkinson says. “We talked about Jasmine as being trapped in a golden cage — she has to live by the rules of this court but she’s struggling to do things her own way and find her own power … she really wants to support and fight for her country and have a sense of freedom.”

Scott (pictured with Nasim Pedrad as Dalia) adds, “It’s that sense of keeping that demure feel whilst still having beauty and opulence and sassiness. I think was really important and I think we got the balance.”

Itching to escape the palace confines and  wander Agrabah’s markets, Jasmine borrows a breezy outfit modeled on the Indian salwar kameez — a tunic over tapered trousers — from her handmaiden Dalia. “Rather than putting her  in a big dark cape, where she would stand out because the people in the marketplace are quite colorful and bright, we thought we’d have fun with this,” says Wilkinson.

It is in the streets of Agrabah that Jasmine encounters the endearing street rat Aladdin and they are chased through the labyrinth by the palace guards who do not recognize the princess. “What was very important was that I can move in it because obviously she goes on the run,” Scott says. “There’s this balance of feeling that it’s from the royal household but obviously it’s not royalty.”

Wilkinson’s earlier designs kept the outfit quite neutral in color, but for Scott, it was the pop of yellow and bright green and red hems that he added later that really made the outfit.  “It was light and I thought it was really beautiful whilst working for that particular scene and being understated,” Scott says. “Sometimes the simpler costumes are the ones you just love the most.”

When suitors flock to the palace to ask for  Jasmine’s hand in marriage, she dons a striking magenta gown with a five-foot train, accented with turquoise and embroidered with gold coins and crystals. “We wanted to show the formality and the structure of this whole set-up in the dress itself, so it’s quite a restrictive bodice but it’s highly decorative,” Wilkinson explains. But Jasmine is no ordinary princess, and even in formal regal robes, she still has her own way of doing things – the gown hides a pair of turquoise trousers under the skirt. “I was always very, very adamant that the more trousers, the better, as to me, that is Jasmine’s trademark,” Scott says.

She adds, “This was the one time for this moment it felt right to have that corset, it completely straightens her up and it’s the first time we see her going from running around in the mud with Aladdin to being absolutely wow … so the outfit was very uncomfortable but incredibly impressive and worth it.”

As Jasmine awaits her meeting with Prince Ali (Aladdin in disguise) in the palace courtyard, she wears a vibrant magenta and coral gown.  “[Ali] has promised to meet her secretly and ends up not turning up, so she gets stood up,” Wilkinson says. “I knew I had to create something very special for this moment.”

The dress is more free-flowing than Jasmine’s other more structured, regal outfits, and weaves in Indian influences into the embroidery and Arabic influences into the veils and jewelry, with the fabrics sourced by Wilkinson from Morocco, Turkey, India, Jordan, and Iran.

“What I wanted to do with her costumes also is to show the strength of her character and it’s to combine colors in interesting, quite unusual ways – the choice of coral and magenta is quite arresting and unusual and gives her a sense of personal and iconic style,” Wilkinson says.

Scott adds, “What I loved about that outfit was there was a flow through it and the colors together, the orange and the pink, were just stunning, so so beautiful. There was one picture taken, and it looked like it was from a Bollywood movie.”

With Genie’s help, Aladdin has charmed his way into the palace disguised as the mysterious Prince Ali, seeking Princess Jasmine’s hand in marriage. As she is presented to him, she wears an orange embroidered gown with billowing sleeves and accents of green — an unusual color pairing but as Wilkinson explains, often seen in Arab and South Indian cultures. “The color and the material and the detail just brings it into a whole different world,” Scott says. “That’s where you get the things that clash and come together and create something new, so that’s what I loved about this outfit.”

The use of green is also quite a deliberate visual tease, Wilkinson adds. “We have a little inclusion of turquoise in all of her costumes until … the turquoise outfit is revealed.”

Wilkinson knew it’d be one of Jasmine’s more formal and lavish court costumes, so he crafted something to fit the bill. “I wanted it to be quite restrictive in its movements so the bodice is very tight and controlling,” he says.

For more of our Summer Movie Preview, read it here, or pick up the new issue of Entertainment Weekly — on stands or buy it here now. Don’t forget to subscribe for more exclusive interviews and photos, only in EW.

Chambers on Netflix location: Where is Crystal Valley? Is the school real?