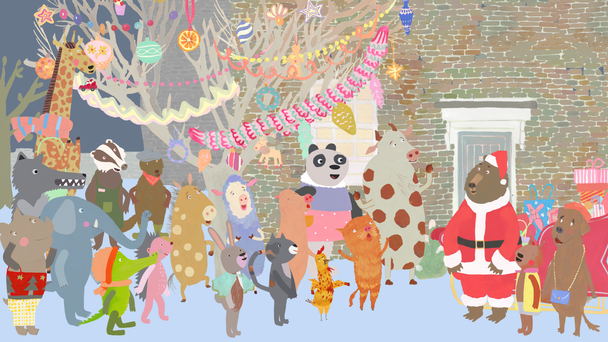 An Irish animation studio is releasing an adorable festive film for little ones just in time for Christmas.

Hopscotch and the Christmas Tree is a 30-minute film based on the book by Katy Seagrove, which was published last year by Tiny Tree in the UK.

Katy was inspired to write the book after reading Gretchen Rubins’ The Happiness Project and it teaches children that happiness is about friends, family, kindness, gratitude, resilience, mastery, exercise and mindfulness.

The story features a happy horse and her animal pals as they search for a Christmas tree and learn about friendship, family, and even sustainability, on their journey.

Produced by Irish company Ink and Light, helmed by husband and wife team Leevi Lemmetty from Finland and Dubliner Tamsin Lyons, it’s beautifully rendered with characters hand-painted by Irish and Lithuanian artists and voiced by Irish actors.  Irish composer Dean Valentine is behind the stunning soundtrack.

“We did test doing it in the computer,” Tamsin tells Independent.ie, “But it’s just not the same because when you paint by hand there are all these little variations in texture so it’s really hard to replicate. I’m so glad we did it because you can see it in the end.”

Hopscotch and the Christmas Tree – Trailer from Ink And Light on Vimeo.

Hopscotch is aimed at 3-5 year olds, an audience increasingly adept at choosing exactly what they do and don’t want to watch, so it’s important, she says, to provide them with a variety of different options.

“We can open our minds to different looks,” she says of the enormous range of animated series now available to children on TV and streaming services.  “You can have a bit of Paw Patrol if you have a bit of this and just a bit of variety.”

Tamsin and Leevi’s daughter Vivienne is four years old and a big fan of Hopscotch, originally falling in love with the characters via the book, which she continued reading until April, despite its Christmas theme.  “I had to take it away from her at that point,” laughs Tamsin.

Tamsin and Leevi work between Ireland and Finland, spending six months in each country (when projects allow).  The Finnish industry is not quite as established as here, says Tamsin, so they hold Ireland up as a model for Finnish producers. The couple first met at film school in London, where Tamsin originally set out to ‘save the world’ through making documentaries, before meeting a group of animators, including Leevi, and realising the possibilities of the form and “trying to save the world through happy, positive messages rather than focusing on the difficult!”.

She then spent six years working for BreakThru Films, who earned an Oscar for the stunning animated film, Peter and the Wolf.  She was the production assistant on the project, but learned a lot about “attention to detail” and “how to push for better and higher”.

They are skills she has applied to Hopscotch and The Christmas Tree.  RTEJr commissioned the film and it will air exclusively on RTE four times over Christmas.  A new book will follow next year and the film has already been bought to air across Europe next Christmas.

There is also an animated series in the works for 2020, which is brilliant news for Ink & Light and their Lithuanian co-producers Kinomind Films. The Irish animation industry has been enjoying a boom in recent years, with over 2,000 people now employed producing films and television series viewed all over the world. The industry sees a spend of up to €100 million on production here every year, with about 60 per cent of that coming from abroad.

Larger studios like Boulder Media Studio, Brown Bag, and the Oscar-winning Cartoon Saloon have had enormous success and generated talent and subsequently smaller studios which have led to a very healthy industry overall.

Tamsin sees the impact when seeking partners abroad, “When you go abroad Irish animation is known, and especially known for storytelling. We have really good writers, and we’re also know for delivering, and getting it done.  It definitely helps to say we’re Irish.”

Who is Alexandra Cane and how old is she? Love Island 2018 star and make-up artist dumped from the villa with Dr Alex George
World News