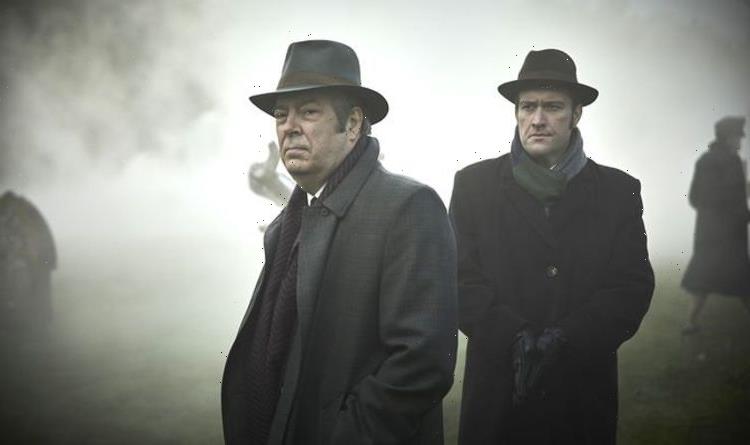 Endeavour: Fred reveals that Morse is the 'drunk on the bus'

Endeavour season eight came to a disappointing end for some fans of the ITV detective drama tonight (September 26). The TV series finale saw Shaun Evans star as Inspector Morse as he helps a group of passengers onboard a bus track down a relentless killer. Viewers branded the third episode as an “absolute farce”, comparing it to an “Agatha Christie” story or “Cluedo”.

The murder mystery episode saw the title character (played by Shaun Evans) tackle a drinking problem as he investigated the violent murder of an Oxford college don.

The detective ended up stranded with a group of strangers after the bus he was on broke down.

Whilst he was getting to know the rest of the passengers, a series of horrifying events played out.

A number of killings occurred, and the murderer had scored ‘x’ symbols across the eyes of his victims.

The episode saw the detective and his new group of assistants attempt to track down the killer among them before he made his next move.

Whilst some fans enjoyed the ‘Cluedo’ style episode, others were left very disappointed.

However, Nationwide Blog said: “#Endeavour This is Brilliant. @MrRussellDavis have you met Mrs @agathachristie?”

However, others were not too sure, with Darren C adding: “This is all a bit Agatha Christie. #Endeavour.”

“A mystery killer picking them off one by one? How many more horror movie clichés will there be? This is supposed to be a crime show, not a horror movie parody.”

Other viewers compared it to horror films such as ‘The Shining’.

Not Geoff Hurst joked: “Very Cludo #Endeavour in the ballroom with a knife LOL.”

Dave Dowley echoed: “Tonight’s episode of Endeavour is a bit like Cludo #Endeavour.”

At this moment in time, it is too early to say whether the series will return for another season.

With all of the main characters still around in the final moments, there is certainly scope for Morse to take on more cases.

Creator Russell Lewis told Den of Geek: “Every year, we had to wait – certainly to begin with – to see if we were going again.

“So we always finished the series at a place that was satisfactory if we never came back […] if force majeure had happened, if any of us had been struck by lightning, we could have left it there.”

Endeavour is available to watch on ITV Hub.