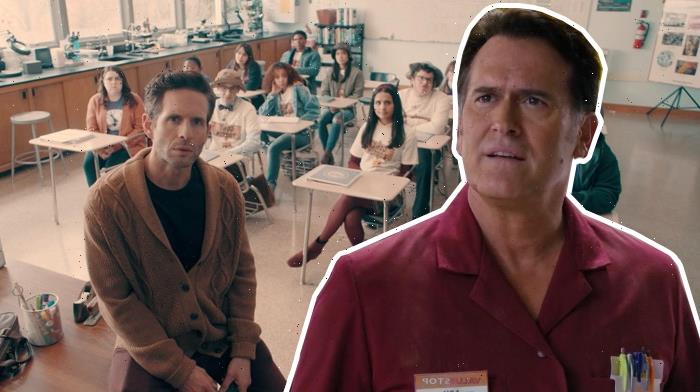 Everyone start shutting up now, because the King is coming to Ohio — that’s right, baby, Bruce Campbell is guest-starring on A.P. Bio.

The Evil Dead franchise star is joining the fourth season of the Peacock streaming comedy, along with his charming, chiseled chin.

A Whole Pack of Daddy Issues

According to Deadline, Campbell will guest star as John Griffin, father of Glenn Howerton‘s character Jack Griffin. Jack’s father has been absent most of his life, but now John has had a spiritual awakening and hopes to reconnect with his adult son. Jack, a disgraced Harvard philosophy scholar slumming it as a high school biology teacher, probably won’t be super psyched about the reunion.

A.P. Bio centers on Jack as he tries to make the worst of every situation. He returned to his hometown of Toledo, Ohio, after losing out on his dream job, taking a gig as the Advanced Placement biology teacher at Whitlock High School. He has no interest in teaching biology and instead uses his class as his own personal scheme squad. While has has certainly softened some because of his relationships with the students and fellow staff at Whitlock, Jack is still prickly and full of daddy issues. John’s arrival can only spell trouble for the plotting former professor.

The Winding Road to Season 4

School was almost out forever when NBC canceled A.P. Bio after its second season. Thankfully, their streaming arm over at Peacock picked up the series for a third season, renewing it for a fourth in December 2020. The series was saved in part because of fan outcry, spawning the hashtag “#SaveAPBio.” With a fourth season in the works and a guest star as big as Campbell, you can definitely call the series saved.

Campbell has been busy on TV lately, having appeared in episodes of Lodge 49 and Fargo, after his STARZ series, Ash vs. Evil Dead, ended in 2018. He is currently producing the next film in the Evil Dead franchise, Evil Dead Rise, and is set to appear in the upcoming Evil Dead video game. Thank goodness there’s plenty of chin to go around.