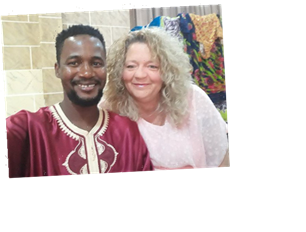 Controversial 90 Day Fiancé star Babygirl Lisa Hamme has earned herself a place in the TLC franchise’s history books. Fans have come out of the woodwork to voice their distaste for the new reality star, who traveled to Nigeria to win over Usman Umar, an aspiring musician. However, her behavior was less than savory while overseas, and has continued to be questionable at best. In fact, Hamme has been caught out slinging racial slurs both online, and at her Nigerian love. Now, she’s available for bookings and promos, and fans think it’s ridiculous.

90 Day Fiancé star Babygirl Lisa Hamme has been under fire since she was spotted using a racial slur on Instagram. Things only got worse when Usman Umar revealed that she called him the n-word during their private time together.

In leaked footage of the 90 Day Fiancé Tell All episode, Umar tells Hamme, “Lisa, last week you called me n*gger which I know is totally inappropriate in America. You called me n*gger, I don’t even get angry about it because I am used to how you are behaving.”

“If you start this sh*t again. Do not open that can of worms. Do not. Do not start. Let me tell you something. Listen, if you open a can of worms,” Hamme replied.

She later told Domenick Nati, “No, that word was used out of context and out of stupidity. My husband accepted my apology, but haters don’t and they want to ride it out to no end.”

Since then, Babygirl Lisa has claimed that Usman Umar is a relationship scammer, and that he scammed her and TLC. She did an Instagram live with her promoter, Rocco Straz, during which she appeared angry and teary-eyed.

She said, “To everyone listening here, it’s very apparent that I am a victim of a romance scam. My husband has used TLC, his family, his friends, people around the world. And I’m going to apologize to everyone here. I did not know that my husband, Sojaboy, was that desperate to become a singer that he would use me and his family and friends. And TLC, the show.”

“He blocked me on all platforms so I don’t know what’s going on and that’s the sad part because everyone comes and tells me what’s going on. … I cannot believe Sojaboy is gonna try and come off as a saint. This man had nothing when I met him, nothing. … He used me and my daughter, telling us that he loved us, that we were the only people that mattered in his life, that he would love me until the day I die,” she added.

The ‘90 Day Fiancé’ star is available for bookings, fans react

Now, like several other 90 Day Fiancé stars, Babygirl Lisa is making herself available for Cameos, bookings, and promos. However, fans of the show are a little nonplussed given Hamme’s behavior during social gatherings and in the public eye.

One Redditor wrote, “No thanks, I’ll just invite an aunt I blocked on FB instead. At least she’d be FREE. What could Lisa possibly have to add at an event?!”

Another user replied, “Unlimited growling, grunting, glaring at your guests, & her specialty show of changing her accent every 10 min.”

After one user said they don’t understand why anyone would book a star from the hit TLC franchise, another user replied, “That’s what I wondered when I saw Tom’s pricing. 1. For what? For him to sit and eat your party food and drink your drinks and just chit chat with the invitees who will most likely not have a clue about who he is? And, 2. Who would pay for that!?”

“A legend in her own mind…,” added another.