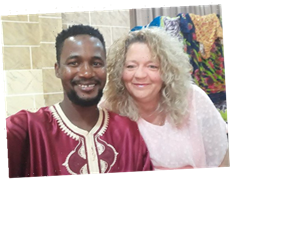 90 Day Fiance star Babygirl Lisa Hamme hasn’t exactly been a fan favorite over the last few weeks. Some of the show’s viewers believe she’s been acting “abusive” toward Usman. When she admitted to calling her husband the N-word, some fans felt she shouldn’t be included in the show any longer.

“That word was used out of context. It was used out of stupidity. My husband accepted my apology but haters don’t. They want to ride it out to no end. Other very famous people that do entertainment, they said just let it die down. Let the haters just subside. And the ones who are riding it are the ones who are trying to become popular like you. That is their goal. And by any means, they’re going to do it,” she said in an interview with The Domenick Nati Show on May 22.

Lisa continued: “So I’m just going to ignore those haters. I’ve acknowledged it. I’ve made a public apology on another podcast interview and it was posted to my IG. It was seen by all my fans but it’s still not good enough.”

Lisa had been receiving lots of negative comments from fans on her Instagram, even “death threats.” But she feels she’s getting them because Usman is “very good looking.” In response, Babygirl Lisa recently turned off the comments on her page.

“I’ve been receiving a lot of death threats and a lot of hate due to fans who are completely obsessed over a show. I guess it’s true in quarantine they continuously watch it over and over. I’m a 53-year-old woman married to a 31-year-old man so, you know, there’s a lot of hate there because my husband is very good looking,” she said.

Lisa is also currently involved in a legal dispute with a blogger named Amber who’s trying to get her kicked off the show.

Read more: ’90 Day Fiance’: Ashley Smith Answers If the Show Is Fake or Not