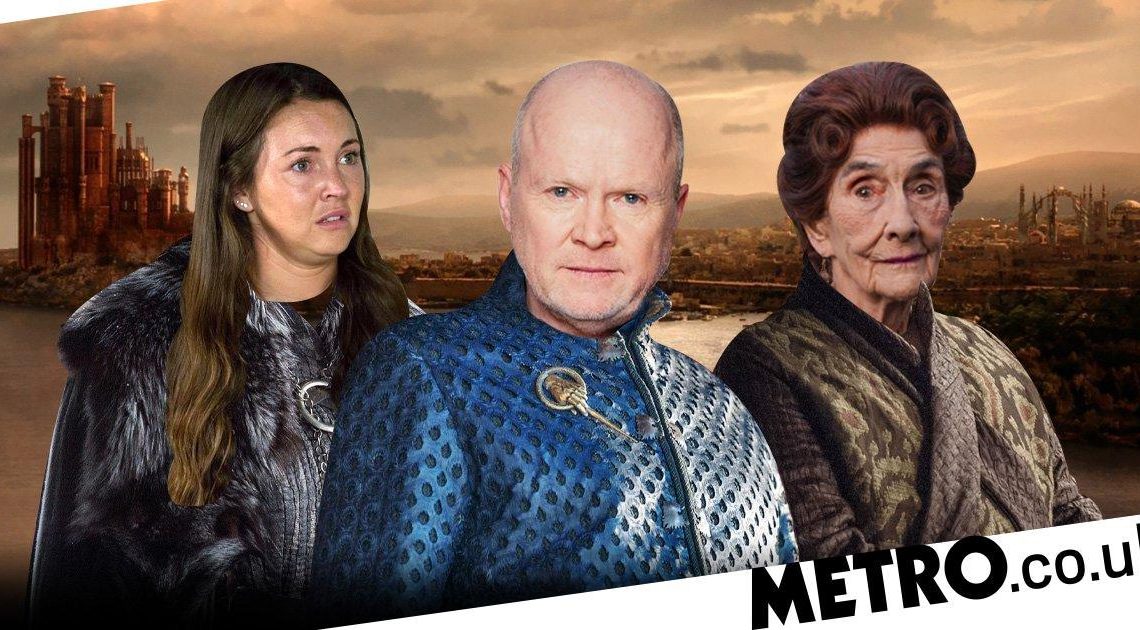 Oh wow, a back from the dead twist? ‘Been there, done that,’ thought Den Watts as Jon Snow was brought back by Melisandre. While we have no idea if it was a woman in red who pulled Den from the canal when he supposedly died, he came back in one piece eventually. Mind you he ended up dying again which doesn’t bode well for Jon Snow.

4. Jaime as a redeemed killer is Max Branning

Remember in episode one of Game Of Thrones when King Slayer Jaime tried to murder child Bran Stark when he caught him in bed with his sister? And remember when Max Branning was killing Steven Beale, torching a restaurant with Jane inside and then blackmailing her out of town? Nah, nor does anyone else, they’re just getting on with their lives and we’re pretty much rooting for them.

Sansa Stark has been married to a depraved monster of a king, lost her father and brother and been torn apart from the rest of her family, been forced into more marriages and been brutally raped on her wedding night. But she remains a badass, turning her never ending agony into strength where she now owns anyone who dares cross her. She is Game Of Thrones’ very own Stacey Fowler.

6. Babies being sacrificed to White Walkers is practically the controversial baby swap storyline

Okay maybe not quite the same thing but remember that controversial plot which saw Ronnie swap her dead baby with Kat and Alfie’s son Tommy? It left a very bad taste in the mouths of viewers and left us shouting and screaming at our screens, a very similar reaction to what GoT was going for when we had to witness a baby be sacrificed to the Night King and be turned into a White Walker.

Plenty of people have died on their wedding day in EastEnders – from Stella Crawford through to Bradley Branning. But Game of Thrones just had to top that with an all out massacre at the Red Wedding. Not one to be outdone, EastEnders went for a Blue Wedding. In that Ronnie and Roxy died in the deep blue depths.

8. Who killed Joffrey is every Walford whodunnit ever

When a villain spends their time pissing everyone off and ranking up the enemies and an episode follows with everyone getting a turn of their malice and then glaring with rage at them, you just know what comes next. Who killed Joffrey was a take on a very familiar EastEnders trope from who shot Phil and who murdered Archie right through to the major success of who killed Lucy. GoT wanted a bit of the whodunnit pie – while Joffrey enjoyed his last bite of pie on his wedding day.

9. Joffrey forcing Tyrion to eat the book is Trevor forcing Little Mo to eat her dinner

Speaking of that wedding day and the tyrant that is Joffrey, the man was basically violent control freak Trevor Morgan. He tortured wife Sansa and played hellish mind games and one memorable scene saw him destroy a book Tyrion had bought him as a gift and then force him to try and eat it. Much like that horrific Christmas Day scene which saw Trevor pour huge amounts of gravy on Little Mo’s dinner before physically forcing her face into it. Thankfully, both evil men got what they deserved in the end.

Tyrion’s heartbreak to find the one woman he ever loved, Shae, in bed with his father Tywin after betraying him in court led him to take the ultimate revenge. And Tywin’s actions were very similar to sleazy Den creeping son Dennis’ girlfriend Zoe into his own bed. Shudder.

11. Dragons protecting their mother is the Mitchell brothers standing up for Peggy

The Mother Of Dragons will never be touched if her dragons are around – as armies and enemies have learned to their fiery peril. And anyone who messes with a Mitchell – particularly the late, great matriarch Peggy, got the same treatment from her own dragons Grant and Phil.

12. Cersei blowing up the Scepter is Phil torching the Vic

Do you ever get so out of control that you take explosive action with huge consequences? Phil and Cersei can relate. On a drug fuelled binge, Phil couldn’t be stopped as he set fire to the pub with everyone still inside it. Cersei had only had a few glasses of her favourite red wine and was a little more calculating when she destroyed the Scepter but it was basically the same end result. Except Cersei’s death toll was higher and regret level much, much lower.

13. Varys knowing all the gossip is Dot Branning

Varys relies on his little birds to keep him abreast of the situation in Westeros and keep himself one step ahead – but if he aspires to be as in the know as gossiping busybody Dot Branning then he has a long way to go.

I’m just waiting for him to mutter to Jon: ‘Now I ain’t one for gossip, you know that, but my birds tell me…’

14. Littlefinger’s intricate schemes are as wild as Stuart Highway’s

When Stuart Highway plans out a long running scheme, he really goes for it. Who’d have thought he’d go to the lengths of having himself shot and getting Mick framed before then stealing his life just for a simple bit of revenge? Littlefinger has an ounce more subtlety but, like Stuart, he enjoys the long game and no-one should ever, ever trust him. Especially when he is being nice.

15. The Moon Door at the Eyrie is the Queen Vic roof

Many people have fallen down the Moon Door at the Vale – much to the entertainment of slightly unhinged Robin. Used as a punishment at the Eyrie, the Moon Door is Westeros’ Queen Vic roof, which has seen Bradley, Abi and Lauren Branning all plunge to the ground below.

16. The man with many faces is Ben Mitchell

Also known as the Man with No Face, he can change appearance at will and trained Arya in how to do the same. He serves the Many Faced God, which we can only assume is Ben Mitchell, who has so far had six faces.

How Many Times Has Kim Kardashian Been Married?