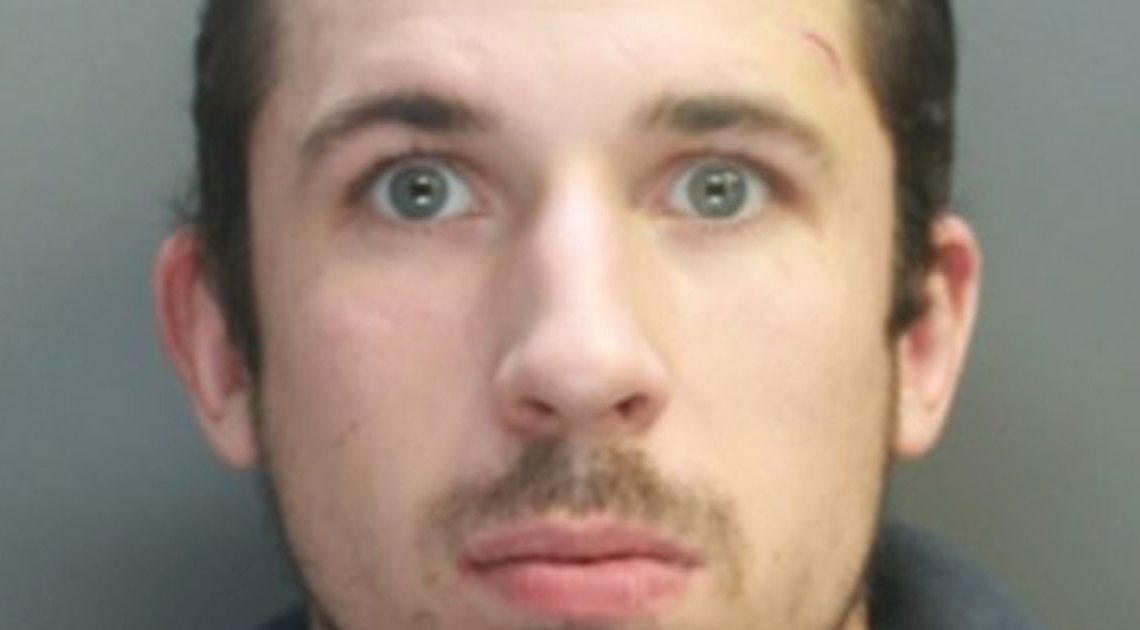 Jordan Davidson has been described as "pure evil" after he confessed butchering innocent OAP Nicholas Churton was "the best day of my life".

The cold-hearted killer barged into the 67-year-old's home and brutally attacked him.

After hacking Nicholas to death he chopped off his arm and leg before fleeing as police launched a huge manhunt.

For weeks before his final, violent act, Davidson had held the small Welsh town of Wrexham in his grip of terror.

By the time he was just 23, he had already been convicted of 38 offences and was described as being "fond of knives".

He had several stints in prison but in 2014 he carried out a series of burglaries by smashing windows and stealing property and was jailed for three years.

However, he was released early and just days later was thrown out of a nightclub following a fight and then arrested later that night for brandishing a knife in public.

Once again out on bail Davidson goes back to his old ways and resorts to burglary.

On March 22, he tries to burgle the home of Robert Simmons, who was in the shower when Davidson walked through his open front door.

After frightening the would-be burglar, Robert didn't notice his keys – and car – had vanished until it was too late.

Davidson has soon crashed the car and after laying low for a few days, marched into a hairdresser's while brandishing a machete.

His attempts to steal cash were foiled when  people from nearby shops came to help and he was forced to flee empty handed.

Michael had spent the afternoon in the pub with pals and had left at about 6pm.

As it was a nice evening, the 71-year-old decided to walk home and was making his way through the park when Davidson asked him if he had a light.

A non-smoker, Michael, who suffers from arthritis, explained he didn't and carried on his way.

Just seconds later he was grabbed from behind and hurled to the floor.

Michael said: "I've got bad knees and I just couldn't get up. My mind was totally blank, I was just in so much shock.

"He asked for my phone and I thought he was just going to rob me because I wear quite a lot of jewellery."

Horrifyingly, it soon became apparent that Davidson wanted to do far more than rob Michael.

The former cook said: "He started shouting at me that he was going to cut my head off. He said it over and over again.

"I don't know how long I was on the floor with him shouting that he was going to chop off my head but it felt like hours."

Davidson then pulled a machete out of his coat and Michael believed he was about to die.

Just at that moment a 15-year-old girl, who Davidson was said to be obsessed with, walked into the park and called his name.

The killer, who was 26 at the time, was said to be besotted with the youngster and immediately walked over to her, leaving Michael on the floor.

Davidson had been bombarding the schoolgirl with bizarre messages in a desperate attempt to impress her.

Michael said: "I finally managed to get up and walked out of the park, I didn't look back and I didn't dare run.

"I went straight to my girlfriend's house and told her I'd been attacked.

"Up until then I hadn't been in any pain but as soon as I got to her house I couldn't stand up, my back had totally gone."

He was rushed to hospital, where he was also interviewed about his ordeal by police.

But Michael's ordeal has left a lasting scar.

He said: "He was wearing a hooded top and now every time I see someone with a hood, it brings it all back. I think they're going to attack me.

"I can no longer walk through that park, I make sure I avoid it."

He said: "There was no motive when he attacked me. He's just an evil guy."

But the pensioner believes he owes the teenage girl who called out to Davidson his life – and cannot thank her enough.

Michael said: "I just want to thank her. I'm convinced she saved my life. He took the machete out at the exact moment she calle dout to him,

"I'm so grateful to her, I do believe it's down to her that I'm alive today."

Following the attack on Michael, the whole local area was afraid but Davidson had one final victim in his sights – Nicholas Churton.

The former restaurateur had had some financial difficulties and was living in a small flat when Davidson knocked on his door and asked to use the toilet.

Nicholas' brother, James, said he was "vulnerable" but "would open the door to anyone".

After letting Davidson into his home the criminal pulled out a hammer and demanded money.

When Nicholas told him he didn't have any, Davidson left only to return a few days later. In total he called on the OAP at least three times.

Each time Nicholas contacted the police but officers did not visit the pensioner. The pensioner's brother, James, said: "He broke in, well, the door was probably open, knowing Nick, with a machete and hacked him to death.

"He was an evil man. Not only did he hack, you know, I mean, this is fairly severe stuff Nick wouldn’t have lifted an arm to anyone. He was very peaceful guy.

"This guy took a machete to his head first of all, and then to his body and then before he left, he chopped his arm off and his leg off with the machete."

Nicholas' neighbours are aware of the disturbance and call the police, who make the grim discovery of his body.

Police launched a huge manhunt and eventually tracked Davidson down – but he wouldn't surrender to custody without a fight.

Officers now believe Davidson was planning to kill one of their colleagues so police would have no choice but to shoot him dead.

The cold-blooded killer hadn't counted on the bravery of the arresting officers, who managed to bring him into custody.

When police traced the BMW he had used to escape justice, Davidson was hiding under a duvet in the back of the car.

PC David Hall was one of those on the scene, along with his colleague, Rhys Rushby.

PC Hall said: "I could literally just see a hand moving in the back, so I remember banging on the window and that’s when I’ve saw him winding the window down because it was an old car.

"That’s when I’ve heard the click of the door and for me it was a decision I had to make of do we keep him in the car or do we try and get him out. So my decision was just to get him out.

"I remember unzipping him, pulling his hood off, and he turned his head away. Soon as I saw him do that, I thought, ‘I know who you are and you’re Jordan Davidson'."

Davidson pulled out a claw hammer and raise it above his head.

PC Rushby said: "And as he’s brought his hand back out, I’ve grabbed hold of it and there’s been a blanket covering his hand so I couldn’t see what he had, I could just feel that he had his fist clenched and turning whatever it was towards me, saying, 'I’ve got a gun, I’m gonna shoot ya, I’m gonna kill ya'."

Without thinking, PC Hall fired his Taser into the back of the car while PC Rushby dragged Davidson out of the car.