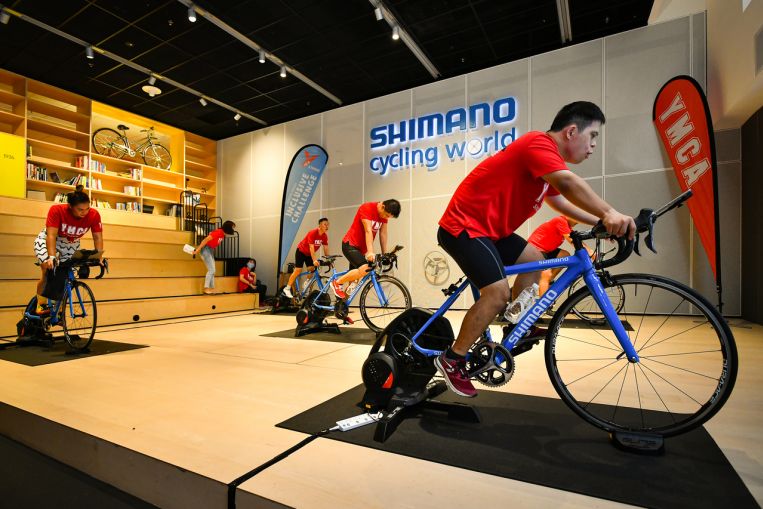 YMCA Inclusive Challenge 2021 to raise funds, awareness for those with special needs

SINGAPORE – Once reluctant to go cycling and hiking, YMCA special needs ambassador Ryan Yap now goes on daily rides of up to 48km and weekly 7km to 10km hikes with his father Howard.

Howard, 57, said Ryan, 25, who has Down’s syndrome, was initially reluctant to join him on these outdoor activities.

“So I reassured him and sometimes invited his friends to follow us, then he was more willing. They can (be motivated) together and get together as a community to work out,” added Howard, who taught Ryan to cycle two months ago.

“I wanted him to be more active and I found that he was more energetic and willing to socialise after we started exercising.

“Sport helps him become more confident and he gets to bond with me and his friends also.”

Recently, the pair each climbed 3,776m as part of the YMCA Inclusive Challenge 2021, which engages the public in raising funds and awareness for those with special needs. It is a continuation of the inaugural YMCA Inclusive Climb in 2019, when 10 YMCA special needs ambassadors and seven YMCA staff and volunteers from Singapore climbed Mount Fuji in Japan. The event was not held last year because of the coronavirus pandemic.

To complete this year’s challenge, participants must climb 3,776m – the equivalent of Mount Fuji’s vertical height – or walk, run or cycle 125km, the perimeter of the base of Mount Fuji.

The father-son duo completed the distance at various locations, including Bukit Timah Hill and the Pinnacle @ Duxton.

Mr Tan, also president of the Singapore National Olympic Council, said the ride was more tiring than expected, but encouraged more people to keep active while doing good at the same time.

He said: “Sometimes there’s a lot of inertia… but when people donate, you feel obliged and it forces you to keep going. But the main thing is really to raise awareness.

“Building an inclusive society is not just a slogan, there are things you can do and being aware is part of it. Raising funds is also important… I also hope that as you become more aware, you also would be interested in volunteering to help.

“The whole SG Cares effort, it isn’t just about Singaporeans with special needs, it’s about all of us because as we participate, as we… not just donate money, but I think also time and commit a part of our lives into the lives of others, I think we will change as well. And as more of us begin to experience that change, more people will change and society will change.”

Mr Loh added: “The most important thing is to help our special needs youths go beyond themselves, reach heights they never thought possible and help them build independence, confidence and resilience.

“Our philosophy is we want to champion, challenge and train you. We champion and encourage you, but we also want to challenge you to do something difficult.

“My hope is for them to see they’re not just special needs, but also special abilities. And for all of Singapore to know these are very special people with real heart.”

Six other YMCA special needs ambassadors are also participating in the challenge, which started on Feb 27. The YMCA aims to raise $250,000 by the end of the challenge on Aug 9.

As of July 4, over 760 participants have raised some $170,000 for YMCA special needs programmes, including arts, sports and vocational training programmes.

Participation costs $38 and the distance is recorded via the Strava app. To sign up or for more information, visit this website.