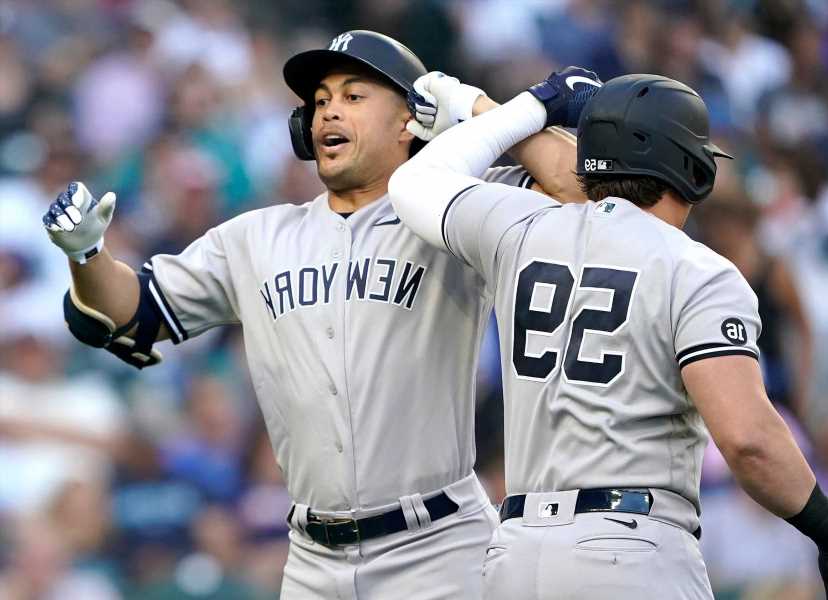 Yankees star out of lineup with ‘lingering’ injury

Imagining what a sad Yankees trade deadline selloff could look like

SEATTLE — The regular season is barely half over, but the Yankees’ future could be decided in the coming weeks, as the organization decides whether to stay all-in or to sell at the trade deadline.

Aaron Boone is aware of the stakes of the next few weeks.

“We understand the importance of these games and the hole we dug ourselves in the first half of the season,’’ Boone said before the Yankees opened a series against the Mariners. on Tuesday night. “It’s a very important week for us and hopefully we get it off on a good note.”

The Yankees pounded the Mariners from the jump, as Giancarlo Stanton crushed a three-run homer with one out in the first and they added three more runs in the second off former Yankee Justus Sheffield.

Sheffield, acquired along with Clint Frazier and others from Cleveland in the Andrew Miller trade in 2016 and sent to Seattle in exchange for James Paxton in 2018, lasted just 1 ²/₃ innings before Luke Voit ended his night with a two-run single. Sheffield’s ERA jumped to 6.48 in the loss.

The Yankees scored twice more in the third in support of Jameson Taillon.

Rougned Odor’s three-run shot in the eighth off former Mets prospect Rafael Montero gave the Yankees’ a season-high in both runs and hits.

It was at least a temporary respite from their recent woes, which included three losses in their previous four games that dropped the Yankees to just a game over .500.

While general manager Brian Cashman and managing general partner Hal Steinbrenner both said last week the team was in buy mode as the July 30 trade deadline approached, Cashman acknowledged that perspective could change “if we fall like a stone.”

Tuesday’s victory left the Yankees 9 ½ games back of first-place Boston.

They have two more games against Seattle at T-Mobile Park before closing out the first half with three games in Houston, facing the first-place Astros.

“I’m sure it all matters,’’ Boone said of the team’s performance as the deadline nears. “Our focus is on [the games]. That’s more for the front office to focus on what moves to make, to not make.”

And one victory doesn’t mean a turnaround is on the horizon, particularly coming off a 2-7 stretch that included a three-game sweep in Boston and losing two of three to the Mets in The Bronx.

“We’ve still got to right our ship and play our game and play to our capabilities,’’ Boone said. “I hope we’re in a position to do something to help us out, but we’ve got to earn that and play well.”

In order for that to happen, their wildly disappointing lineup needs more nights like Tuesday — as well as more starts like the one Taillon provided against Seattle.

The right-hander won his third consecutive start after an eight-start stretch in which he didn’t win a game.

In his previous outing, Taillon was mostly the beneficiary of strong run support.

But on Tuesday, he took advantage of the Yankees’ early outburst and pitched well and efficiently.

Taillon gave up one run in seven innings, his longest outing of the season, while walking just one and striking out nine.

He allowed just a pair of singles through the first five innings before the Mariners scratched out a run on three hits in the sixth.

The run came in part because of another shaky play by Miguel Andujar in left. With two on and two out, he got a poor jump on a Ty France fly to shallow left-center. Andujar dove and the ball glanced off his glove and fell for a run-scoring single.