Home » Sport » Yankees’ Florida trip gets off to disastrous start vs. Rays 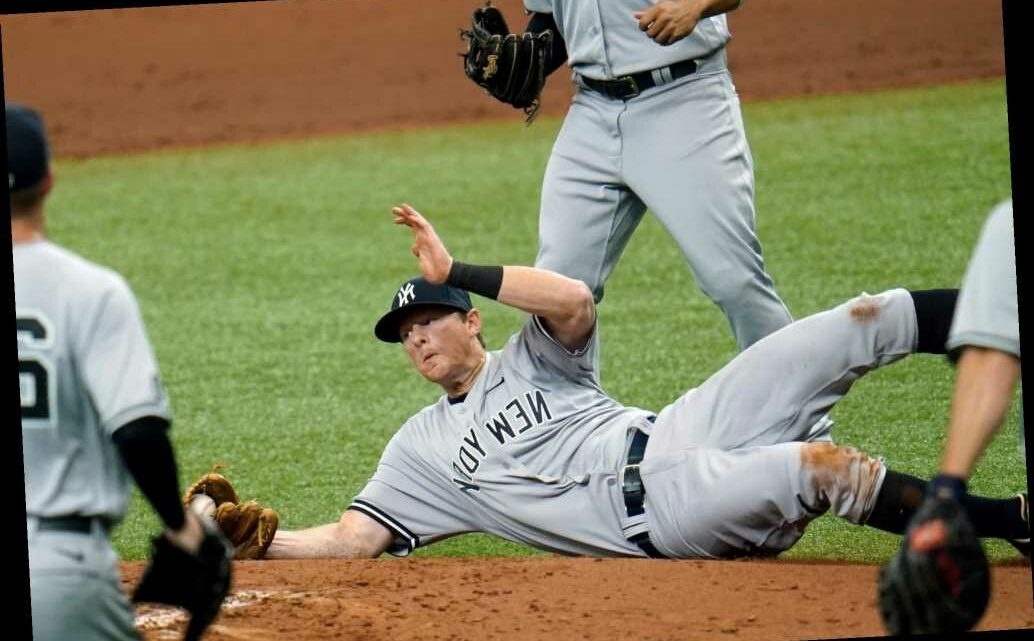 Yankees’ Florida trip gets off to disastrous start vs. Rays

COVID vaccine knocks one Yankees star out of lineup

Yankees are playing the ‘long game’ with Aaron Judge injury

New Yankee will be difference in first game vs. Rays

ST. PETERSBURG, Fla. — The Yankees stood on the third-base line and watched the Rays unveil their AL East and American League title banners before Friday’s game, but Aaron Hicks said as far as the Yankees are concerned, last year was in the past.

“It’s something we want to be doing,’’ Hicks said. “They won last year. This is a new year. We expect to go out there and dominate.”

The plan got off to a bad start, as the Yankees faced Tampa Bay for the first time this season and were throttled in a 10-5 loss at Tropicana Field to start a six-game Florida road trip against two division rivals, the Rays and relocated Blue Jays.

Corey Kluber was knocked around — the victim of some poor infield defense — and the Yankees’ offense was silent outside of a quick, four-run outburst in the third.

With Gio Urshela out following a reaction to the COVID-19 vaccine, DJ LeMahieu was forced to play third, with Tyler Wade at second. Both players had rough second innings. LeMahieu made a throwing error on a Yandy Diaz grounder with one out and Wade let a Joey Wendle ball get by him for what was ruled a single. It sent Diaz to third and he scored on a Willy Adames double off the wall in right, just over a leaping Clint Frazier’s glove. Brett Phillips followed with a sacrifice fly to center to score Wendle and make it 2-0.

LeMahieu managed to corral Mike Zunino’s high pop up, diving near the mound, to end the inning.

The Yankees tied the game in the third.

After Rays starter Rich Hill retired the first eight Yankees he faced, Wade reached on a two-out infield single. Wade would have scored easily on LeMahieu’s double to center, but had to stay at third when it bounced over the center field wall. Giancarlo Stanton followed with a single through the shift on the right side of the infield, driving in both runners.

They took the lead one batter later when Hicks blasted a 1-2 pitch into the seats in left for his first home run of the season, as the Yankees went ahead. 4-2.

It didn’t last long, as Kluber faltered in the bottom of the inning.

The first three batters reached, with Randy Arozarena’s single to right driving in a run. Kluber struck out Brandon Lowe, but walked Diaz and his day was over after 62 pitches.

Nick Nelson came in and immediately gave up a two-run double to Wendle, as the Rays went back up, 5-4.

The Rays piled on in the fourth against Nelson, who loaded the bases with no one out. He struck out Arozarena, but Lowe cleared the bases with a double to left-center, extending Tampa Bay’s lead to 8-4. Diaz followed with a single to score Lowe.

Lucas Luetge lasted three innings in relief, saving at least some of the Yankees’ bullpen.

While the Rays kept padding their lead, the Yankees’ offense disappeared. After Hicks’ homer, Hill retired the last 10 batters he faced, giving up just the four straight hits in the fourth.

It continued a string of success for the Rays over the Yankees. Tampa Bay won eight of the 10 meetings in the regular season and then knocked the Yankees out of the playoffs in five games in the ALDS.