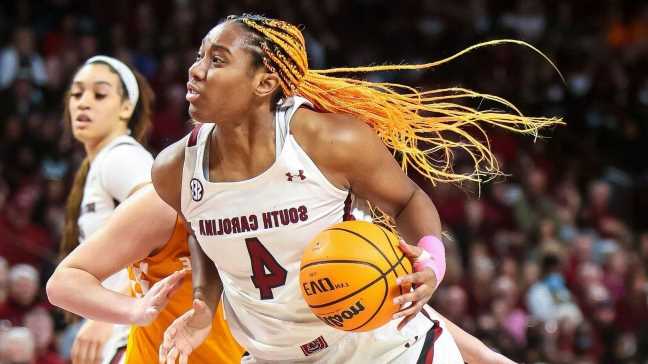 Women’s bracket winners, losers and the path for South Carolina and Iowa

The debate about the women’s basketball national player of the year has been going on for a while now, with South Carolina fans certain it has to be junior post player Aliyah Boston, and Iowa fans just as sure about sophomore guard Caitlin Clark.

And thanks to the setup of the 2022 NCAA women’s basketball tournament bracket, these two might face off for a trip to the Final Four. South Carolina is the No. 1 seed in the Greensboro Region and Iowa is No. 2. The Gamecocks are seeking their fourth shot at the women’s Final Four — all since 2015 — while the Hawkeyes are aiming for the program’s second trip, but first since 1993.

As we look at the 2022 bracket winners and losers, South Carolina, which was ranked No. 1 throughout the season, should be pretty pleased with its potential path to Minneapolis.

Brackets are open! Head to Tournament Challenge and fill out your bracket now!

The biggest concern for South Carolina is its offensive output and not its defense, which has been very reliable. Can Iowa, with Clark’s all-over-the-court range and post player Monika Czinano’s sky-high field goal percentage, test even the best defenses? Definitely. But Iowa’s defense is not quite at the level of that of Texas, UConn or Baylor.

Plus, there’s the fact that to get to the Greensboro final, Iowa might have to beat in-state rival and No. 3 seed Iowa State, which knocked off the Hawkeyes 77-70 on Dec. 8. Also, if seeds hold, South Carolina might have to face No. 4 seed Arizona, which made the national championship game last season.

A South Carolina vs. Iowa regional final would be a lot of fun in that it would showcase two totally different kinds of players who star for those teams, not to mention two players who might one day be USA Basketball teammates on the senior national team. Talk about a matchup that would get both fan bases more revved up than they already are.

As the overall No. 1 seed, South Carolina has to be labeled a “winner” on Selection Sunday. Here’s a look at teams that join the Gamecocks in that category, as well as teams who might be less fortunate:

Big East: The league gets in four teams, including surprise First Four team DePaul, which will face Dayton in Ames, Iowa, for the right to take on No. 3 seed Iowa State in the Greensboro Region. Also in that region, No. 10 seed Creighton will play No. 2 Iowa. In the Wichita Region, No. 11 Villanova plays against No. 3 Michigan.

And despite the fears of UConn and fans during the season that the Huskies might get shipped out of the Bridgeport Region, they will be close to home once again as a No. 2 seed there.

ACC: The conference got eight teams in overall, tied with the SEC for the most. That includes two No. 1 seeds: NC State in the Bridgeport Region and Louisville in the Wichita Region.

North Carolina (Greensboro Region), Notre Dame (Bridgeport) and Virginia Tech (Spokane) are all No. 5 seeds. Miami, which made a run to the ACC tournament final, is No. 8 in Greensboro, and Georgia Tech is No. 9 in Spokane. Florida State will play in the First Four.

The ACC was expected to get eight teams in, so everything went as planned. Having two No. 1 seeds is a feather in any conference’s cap, and the fact Louisville hung on in that regard was one of the bigger stories going into Selection Sunday.

Big 12: A half-dozen teams are in the field, as expected, including No. 8 Kansas (Spokane Region) making its first appearance since 2013. Texas’ upset win in the Big 12 tournament Sunday cost Baylor a No. 1 seed, but both landed No. 2 seeds; the Bears in the Wichita Region and the Longhorns in Spokane. The No. 1 in Spokane is Stanford, which lost to visiting Texas on Nov. 14. Turnovers have been a concern for the Cardinal, and if they meet the Longhorns in the regional final, that matchup could test Stanford.

Iowa State (No. 3 in Greensboro) and Oklahoma (No. 4 in Bridgeport) are also getting to host games. Kansas State is the No. 9 in Bridgeport.

The other league teams in the field are regular-season and tournament champ No. 1 Stanford (Spokane), No. 4 Arizona (Greensboro), No. 5 Oregon (Wichita) and No. 8 Washington State (Bridgeport).

It’s intriguing that Pac-12 coach of the year Kamie Ethridge of Washington State will face Kansas State in the opening round; Ethridge was an assistant to Deb Patterson at Kansas State from 1996 to 2014. Patterson is now on Ethridge’s Cougars staff, as is former Wildcats star Laurie Koehn.

SEC: Every season, the SEC loads up on NCAA tournament teams, and with overall No. 1 South Carolina the league has a strong championship contender. No. 3 LSU (Spokane) and No. 4 Tennessee (Wichita) are also hosting, and SEC tournament champion Kentucky went from not even being in the NCAA field a few weeks ago to the No. 6 seed in Bridgeport. The SEC was hoping for nine teams in the field, but eight is still pretty great.

NC State: How can a No. 1 seed be a loser? Geography worked against the Wolfpack this time. Greensboro is right in their backyard, and senior center Elissa Cunane grew up just outside that city. But because South Carolina is the top overall seed, the Gamecocks were placed in the town that’s less than a two-hour drive from Raleigh, North Carolina.

Meanwhile, NC State is shipped to Bridgeport, where they might have to face an arena full of UConn fans if the No. 2 seed Huskies also make the final.

NC State was also a No. 1 seed last season and was upset by Indiana in the Sweet 16. The Wolfpack have been to the Final Four just once: in 1998 under legendary coach Kay Yow. Current coach Wes Moore has done a magnificent job at NC State, which won the ACC regular-season and tournament titles. But the Wolfpack sure would have liked to be playing in Greensboro, where they just celebrated their league-tournament crown.

Of note, the Wolfpack can’t be too surprised. Despite South Carolina’s loss to Kentucky in the SEC final, the Gamecocks have been penciled in as the No. 1 seed in Greensboro for months.

Missouri: The Tigers were on the bubble at 18-12 overall and 7-9 in the SEC, and they have victories over South Carolina and Florida. Many thought that would be enough to make them the ninth team from the SEC to get in. But the selection committee took only one team that had a losing record in the SEC: Arkansas, which was also 7-9 and 18-13 overall. The Razorbacks (the No. 10 seed in the Spokane Region) beat Missouri in the regular season and in the conference tournament.

UCF will face No. 10 Florida in the first round. UConn, barring the biggest upset of all time by No. 15 Mercer, will be waiting in the second round. The Knights have to be thrilled with their season and their seed, but probably wouldn’t mind going someplace, anyplace, besides UConn.

Three of the No. 5 seeds: Being a No. 5 seed in the women’s tournament is a little like finishing fourth in the Olympics: So close to the podium, but still so far away. The top 16 seeds get to host early-round games, so seeds 1 through 4 in each region benefit. The No. 5s hit the road.

For the Virginia Tech Hokies, their No. 5 seed in the Spokane Region is good news and a nice reward for a program that has been ascending in recent years under coach Kenny Brooks. It’s the second-highest seed in Virginia Tech history; the Hokies were a No. 4 seed in 1999. Sure, they would have loved to get a No. 4 again, but they still have to be pretty content with going on the road to face No. 12 Florida Gulf Coast on a neutral court at No. 4 Maryland, which opens against No. 13 Delaware.

For Oregon (Wichita), Notre Dame (Bridgeport) and North Carolina (Greensboro), getting No. 5 seeds is more bittersweet because they all had a chance — with another win perhaps — to move up into the top 16. Instead, the Ducks will start play at Tennessee, the Irish at Oklahoma and the Tar Heels at Arizona.

The good news for North Carolina, though, is that if the Tar Heels can come out of Tucson in the early rounds, they would be back very close to home in Greensboro, where they just played the ACC tournament.