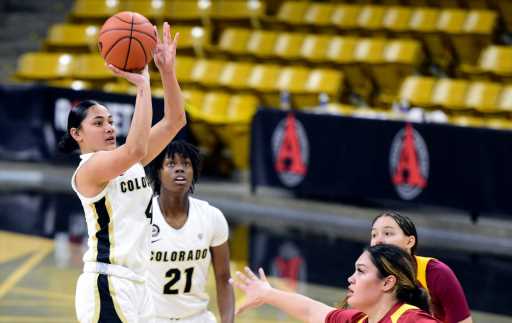 On one hand, Sunday’s women’s basketball national title game matchup between Stanford and Arizona was a harsh reminder to the Colorado Buffaloes that they missed an opportunity this year.

On the other hand, that matchup serves as motivation, indicating that maybe the Buffs aren’t that far away from earning a coveted spot in the NCAA Tournament.

Colorado (12-11, 8-8 Pac-12) had its best season since 2013 and reached the Women’s NIT quarterfinals. For the eighth consecutive season, the Buffs were left out of the NCAA Tournament, but the first time in a while can legitimately feel that getting to The Dance was a real possibility.

“We were crushed,” CU head coach JR Payne said this week in reflecting on this season. “Yes, there were things that were out of our control, but there also were things – like Arizona, at Arizona State – that were in our control that we slipped on.”

The Stanford vs. Arizona championship game was the first all-Pac-12 final ever, and it featured two teams the Buffs know they can beat. In fact, they did beat Stanford, upsetting the No. 1 Cardinal, 77-72, in Boulder on Jan. 17.

A month earlier, on Dec. 18, the Buffs had then-No. 6 Arizona on the ropes. They led by 12 late in the third quarter, but remarkably missed nine of 12 free throws in the fourth quarter and lost by three.

From 2014-20, CU struggled to compete in the Pac-12, finishing ninth or worse each of those seasons. During that stretch, CU ranked last with a combined conference record of 31-95.

This year was different, however, and could be a turning point for the program.

With a mix of veterans – led by first-team All-Pac-12 senior Mya Hollingshed – and youth, the Buffs were competitive throughout the Pac-12 schedule. The Buffs hit the .500 mark in Pac-12 play for the first time since 2013, and five of the eight losses came by eight points or less.

Finishing at No. 52 in the final NET rankings, the Buffs were on the NCAA tournament bubble and might have made it by turning one or two losses into wins.

It didn’t help that the COVID-19 pandemic caused six games to be canceled, five because of issues with other teams. UCLA – No. 8 in the NET rankings – canceled on the Buffs twice, while Oregon (No. 10) and Arizona (No. 15) both canceled once.

“Win or lose, those games would have helped us (in the NET rankings),” Payne said.

While there were certainly some elements out of CU’s control, there was plenty in the Buffs’ control. Losing by one at Denver in a non-conference game on Dec. 8; the Arizona loss; a four-point loss at USC on Jan. 11; a four-point loss at ASU on Jan. 22; and a dismal performance in the first round of the Pac-12 tournament against Washington all cost the Buffs.

Even with the challenges, CU, for the first time in a while, came away feeling it let the NCAA tournament get away.

Yet, they were also responsible for turning the corner.

The gap between CU and the Pac-12’s elite was massive not too long ago. The gap is still there, but it’s not as wide, as the Buffs took their biggest step to date under Payne, who is now 72-75 in five seasons at CU.

“We won games that a year ago we could have won, but we weren’t built to win them from an experience standpoint,” Payne said. “There were still games that will haunt us. … But, I thought we took big steps forward on the court, in the locker room, in the classroom. We were pretty much achieving at a high level in everything we were doing.”

CU is no longer a relatively easy win for the Pac-12’s best teams. In fact, the Buffs will go into next year as one of the better teams.

“We’ve taken big steps in fixing our mindset and striving and wanting and knowing that we should earn more, but the expectation needs to be there top to bottom,” Payne said. “We should have that mindset all the time.”

With the entire core group of this year’s team coming back next year, Payne said reaching the NCAA Tournament should be the expectation for CU in 2021-22.

“Absolutely,” she said. “I don’t think there will be a team on our schedule that we can’t beat and that needs to be our expectation as we train throughout the summer, as we tackle fall conditioning, fall training, all of those things.

“I’m excited about where we are right now and where we can be a year from now.”

In the Philippines, Everyone Knows Jordan Clarkson’s Name