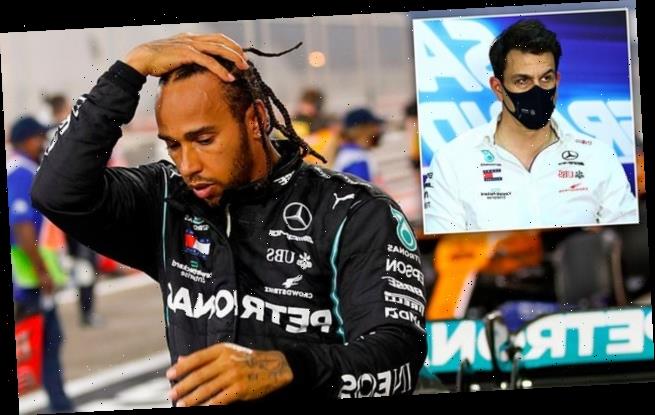 Wolff admits Hamilton is 'not great' after positive Covid-19 test

Lewis Hamilton is ‘not great’ but ‘is in safe hands’ as he continues to suffer with coronavirus symptoms, admits Mercedes boss Toto Wolff while seven-time Formula One world champion recovers in bed

Lewis Hamilton is ‘not great’ and still suffering from coronavirus symptoms after testing positive on Monday, his Mercedes boss Toto Wolff has said.

Hamilton is currently recovering in bed while self-isolating and has been forced to miss this weekend’s Sakhir Grand Prix with George Russell, on loan from the Williams team, filling in for him.

Hamilton, who was recently crowned Formula One world champion for a record-equalling seventh time, is frustrated at having to miss out on competing, admitted Wolff – but he added that the 35-year-old British driver’s health was the main concern. 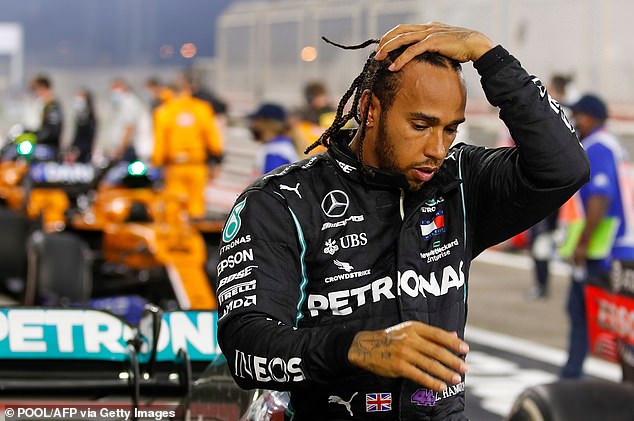 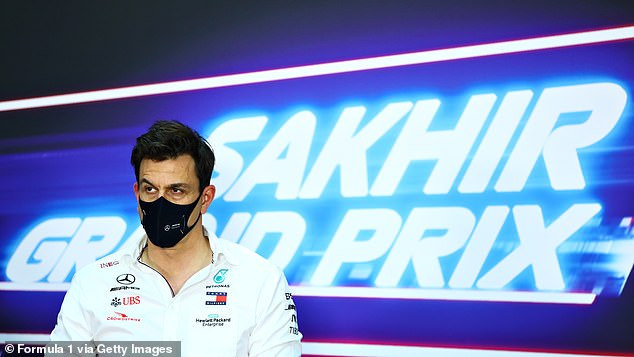 ‘He is not great,’ Wolff said.

‘Covid-19 is something you mustn’t take lightly and he is in safe hands. That is the most important. But it is those early days that are always not so nice.’

‘Mild symptoms and then obviously, as you can imagine, a race driver out of his car and combine it with Covid, he would rather sit in there [the team garage].’

The seven-time world champion said he was ‘devastated’ to miss Sunday’s Grand Prix and his participation in the season-finale in Abu Dhabi next weekend is also in doubt.

The 35-year-old tested positive on Monday, less than 24 hours after winning the Bahrain Grand Prix. He was informed that ‘a contact prior to his arrival’ had also contracted Covid. 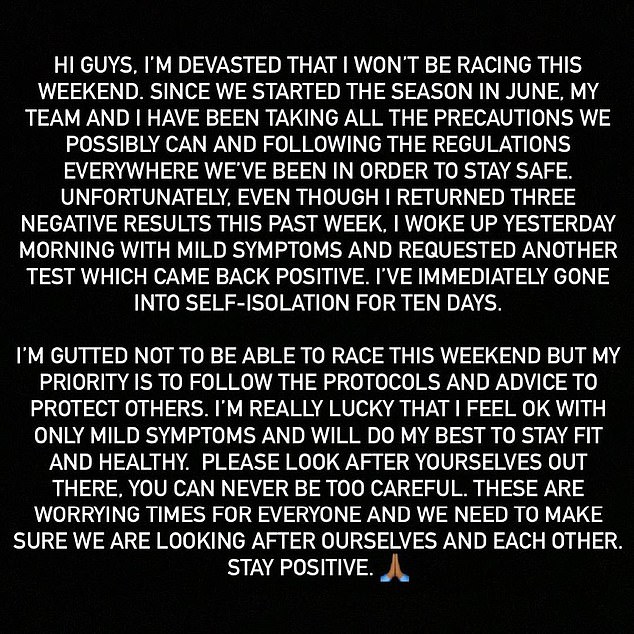 Hamilton, who spent time on holiday in Dubai with his family and close friends before coming to Bahrain, said: ‘I am devastated that I won’t be racing this weekend.

‘Since we started the season in June my team and I have been taking all the precautions we possibly can and following the regulations in order to stay safe.

‘Unfortunately, even though I returned three negative results this past week, I woke up on Monday morning with mild symptoms and requested another test which came back positive.’

It is unclear when or how Hamilton caught the virus, though Mercedes have confirmed someone he came into contact with before arriving in Bahrain has also tested positive.

Hamilton arrived in Bahrain on November 26 having spent two weeks at home in Monaco celebrating his F1 world championship.

He secured the title after winning the Turkish Grand Prix on November 15 and flew home on the same evening. 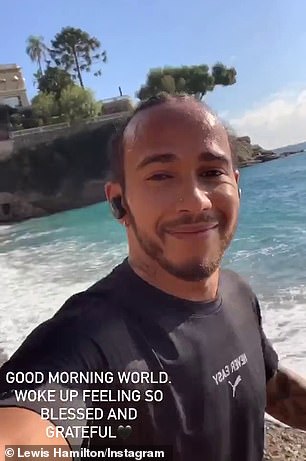 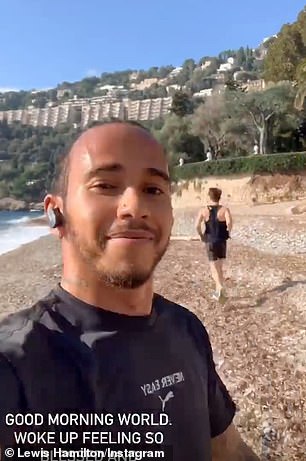 Hamilton won his seventh Formula One title on November 15 in Turkey before returning home to Monaco the same evening. The next day, he filmed himself going for a run along the beach and said that he was feeling ‘blessed and grateful’ 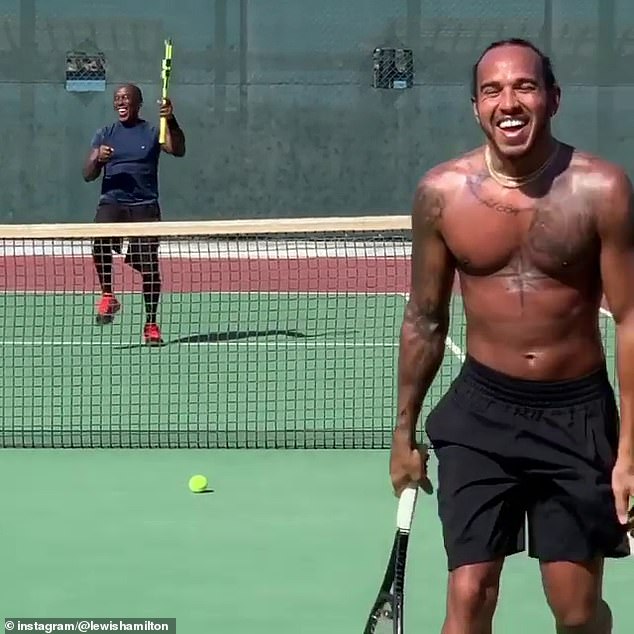 On November 22, Hamilton posted a video on Instagram of him playing tennis with his dad and revealed how he they have both been working hard at getting better at the sport

While in Monaco, he enjoyed a run on the beach and a game of tennis with his father Anthony in videos shared to social media, where he also spoke about celebrating his title win ‘with family’. It is unclear which other family members celebrated with him.

In another video, the Mercedes driver could be seen travelling in the same car alongside Anthony and his friend Daniel ‘Spinz’ Forrest.

While both his father and Forrest were wearing masks, Hamilton did not have a face covering on.

The date or location of the video are not known, though it appears to have been posted on social media on November 25, the day before Hamilton was seen at the track in Bahrain. It has also not been revealed if Anthony or Forrest have tested positive.

It can take up to 14 days for coronavirus symptoms to appear after having contact with someone with the illness, suggesting Hamilton most likely contracted Covid in Monaco or very shortly after arriving in Bahrain.

Meanwhile, Russell made a dream start to his Mercedes debut on Friday after going quickest in first practice session. 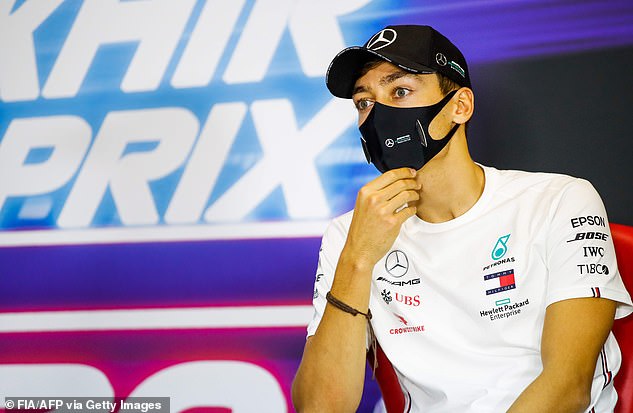 Initially the Brit was a second off the pace set by his team-mate Valtteri Bottas but he soon overtook him at the top before he was beaten by Max Verstappen. 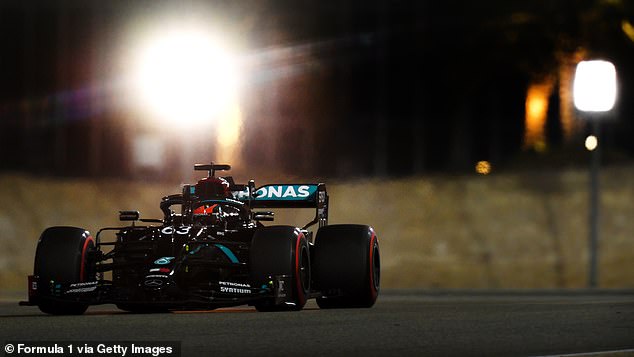 He finished quickest in the first practice session with a time of 54.546 on his Mercedes debut

Russell returned to the the top with a time of 54.546 and he would not be eclipsed again, finishing a tenth ahead of Verstappen’s Red Bull and the Dutchman’s team-mate Alex Albon.

The Sakhir GP will see two debutants, with Briton Jack Aitken replacing Russell at Williams and Pietro Fittipaldi at Haas who is the grandson of two-time world champion Emerson.

Led by Fittipaldi, both drivers gradually grew into Friday’s running despite finishing bottom of the timing sheets.

Fittipaldi is standing in for Romain Grosjean who is recovering following the minor burns he suffered in last weekend’s horror crash which saw the Frenchman’s car break apart before exploding into flames.