Home » Sport » With Victory over Astros, the Yankees Have a Winning Record 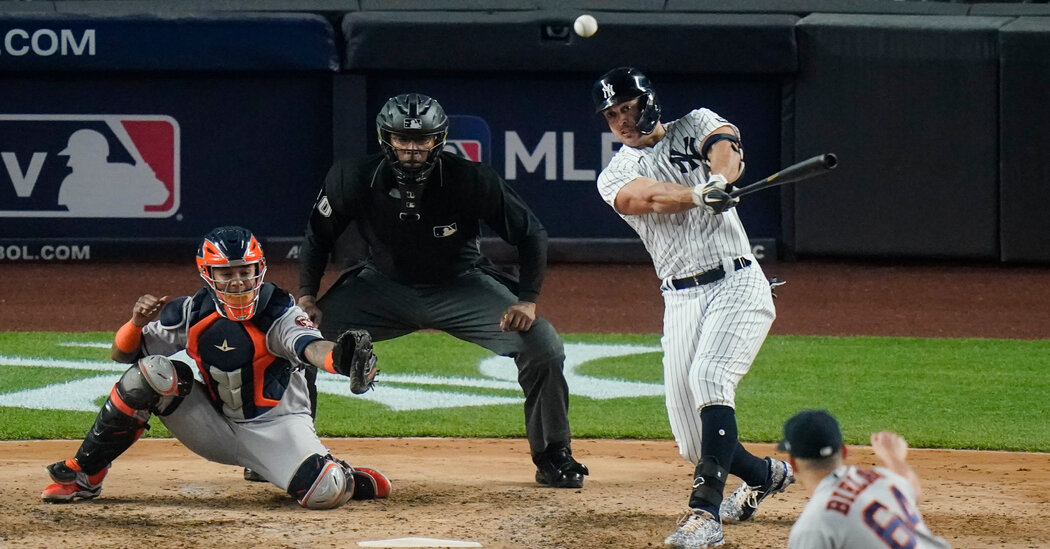 With Victory over Astros, the Yankees Have a Winning Record

Boos and bad words streamed loudly from the seats in the Houston Astros’ return to Yankee Stadium, and the Yankees got a homer and four hits from Giancarlo Stanton to sate those spiteful fans with a 7-3 victory Tuesday night.

In Houston’s first visit to the Bronx since their sign-stealing scam was exposed, an error by Astros third baseman Alex Bregman in the sixth inning let the Yankees blow the game open.

Bregman homered in the first inning to momentarily hush those haters, but his miscue in the sixth with the game tied 3-3 doomed Houston.

He barehanded D.J. LeMahieu’s bases-loaded slow roller but skipped his throw past first baseman Yuli Gurriel. Three runs scored on the play, the last Rougned Odor, whose left knee slammed into catcher Martín Maldonado’s head as he reached the plate. Odor appeared to be trying to avoid LeMahieu’s bat, which was lying in the right-handed batter’s box.

LeMahieu was credited with a single and an R.B.I., and one of the runs was unearned. Stanton made it 7-3 when he scored LeMahieu with a single.

DeGrom Scratched Ahead of Mets Postponement 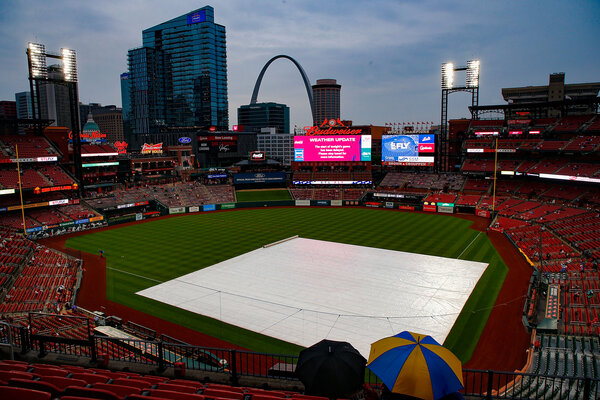 Mets ace Jacob deGrom was scratched from Tuesday night’s scheduled start against St. Louis because he was having trouble getting loose as he started to stretch ahead of his outing.

Mets Manager Luis Rojas said deGrom had a scan that showed inflammation of the latissimus dorsi muscle, a back muscle that connects the upper arm to the spine and the hip.

“And then he’s going to be able to throw, maybe throw a side, and then that will determine when his next start is going to be,” Rojas said.

Rojas said he learned of the issue about eight hours before the Mets’ scheduled game against the Cardinals, which was rained out and rescheduled as part of a single-admission doubleheader Wednesday.

“It’s a positive that it came back that it’s an inflammation only. It’s a few days off from throwing per the doctor’s recommendation,” Rojas said. “He’s optimistic, too, about what’s next after the two days off.”

Before a scan, Rojas described the ailment as tightness.

“I saw him before coming to the field and he was stretching, trying to feel his right side a little bit, and that’s when we started discussing whether he’s going to start or not. And then we got to the point where he’s not, and he’s getting further tests right now and then we’re waiting to see some results,” the manager said.

Rojas said the issue was not evident before Tuesday.

DeGrom, a two-time N.L. Cy Young Award winner, has been baseball’s most dominant pitcher this season, with a major league-best 0.51 E.R.A. in five starts. He has 59 strikeouts in 35 innings with just four walks. Still, he is just 2-2.