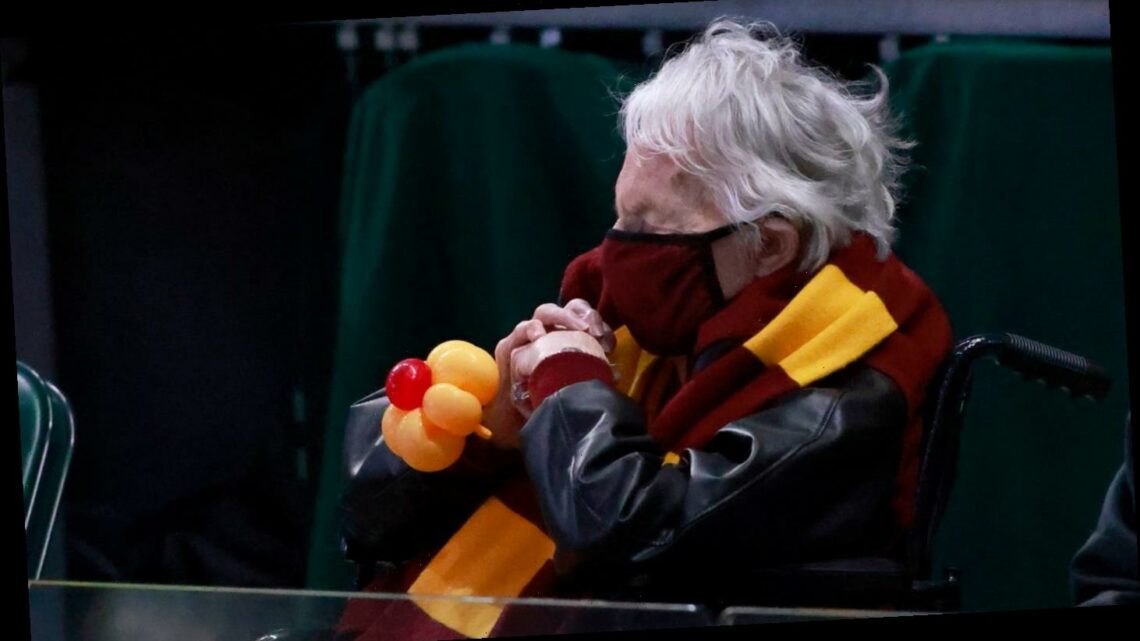 With Loyola-Chicago in Sweet 16, Sister Jean calls out bracketologists: ‘They really don’t know the team’

Sister Jean is taking no chances, be it with traffic or people whose intentions aren’t quite as pure as those of a 101-year-old nun.

Sister Jean Dolores Schmidt, Loyola-Chicago’s team chaplain and America’s favorite nun, is headed back to Indianapolis on Friday to watch her beloved Ramblers in the Sweet 16 of the NCAA men’s basketball tournament. Yes, she is aware the game against 12th-seeded Oregon State isn’t until Saturday afternoon, but she doesn’t want to drive on gameday and risk missing Loyola’s team prayer.

And no, she won’t share what her prayer is going to include.

“Oregon State might be listening to us,” Sister Jean said Thursday in a Zoom session with reporters.

“I’ve sorted out a few (Oregon State players) I think we need to watch specially,” she said. “We need to get a good backup of points right from the beginning and try to get some fast-breaks so we’re not lagging behind. If we play the way we played Illinois, we’ll be doing very well.”

Eighth-seeded Loyola knocked off Illinois, the top seed in the Midwest Region, last Sunday. Sister Jean got to see the big win in person, having badgered Loyola and NCAA officials to allow her to attend the first- and second-round games, her first excursion outside her residential facility since the COVID-19 pandemic began.

After the game, the Loyola players made a point of saluting her as they were thanking the Rambler fans who were at the game.

“It was a great moment,” Sister Jean said. “To think we got through that whole game with Illinois being ahead … we just held our own the whole time. At the end, to see the scoreboard said the W belonged to Loyola, that whole game was just so thrilling.”

Just as in 2018, when Loyola reached the Final Four, Sister Jean does not have the Ramblers going all the way. She has them reaching the Elite Eight this year, one round better than in 2018.

But nothing would make her happier than for Loyola to wreck her bracket again.

“I’ll be jumping – figuratively – I’ll be jumping around just as much as they are,” she said. “It would be great to get to the Final Four again, if not a couple of steps more.

“I’ve waited since 1963,” she added, referring to Loyola’s only national title, which she watched on an 11-inch TV belonging to another nun. “If we get this, it would be perfect.”

Loyola’s road to the Final Four was made easier by several upsets last weekend. Houston is the only other single-digit seed left in the Midwest Region after 11th-seeded Syracuse took out third-seeded West Virginia and Oregon State knocked off fifth-seeded Tennessee and fourth-seeded Oklahoma State.

Which Sister Jean said only validates her criticism last week about this year’s bracket.

“I still think there was an imbalance,” she said. “Bracketologists watch the games endlessly and watch the plays, but they really don’t know the team. I know my team, which I think is why I put such faith and trust in them.”

Though Sister Jean hasn’t seen the Loyola players in person since last March, she keeps in contact with them through emails, phone calls and Zoom. She hasn’t reached out this week because she doesn’t want to distract them while they’re in “I like to say cloister, but they’re in quarantine.”

Besides, she has plenty of things to keep her busy, too.

Sister Jean is a media darling, just like she was in 2018, and she’s been inundated by interview requests, emails and people who want to meet her. That includes former NBA star and Chicago native Dwyane Wade, who took to Twitter after Sunday’s game to see how he could get in touch with her.

Anyone has Sister Jean info!? Asking for a friend 🤷🏾‍♂️

Sister Jean said she heard that, but hasn’t talked with Wade yet.

“I’m taking so much time just to read my ordinary emails. I can’t seem to get away from (having) 400,” she said.

There will be time enough for that in the off-season. Now, though, there’s another trip to Indianapolis to make and, she hopes, more Loyola victories.

“I’d like to see them go right to the very top,” Sister Jean said.

And she has faith they can do it.

Best Sweet 16 bets and futures for the NCAA tournament