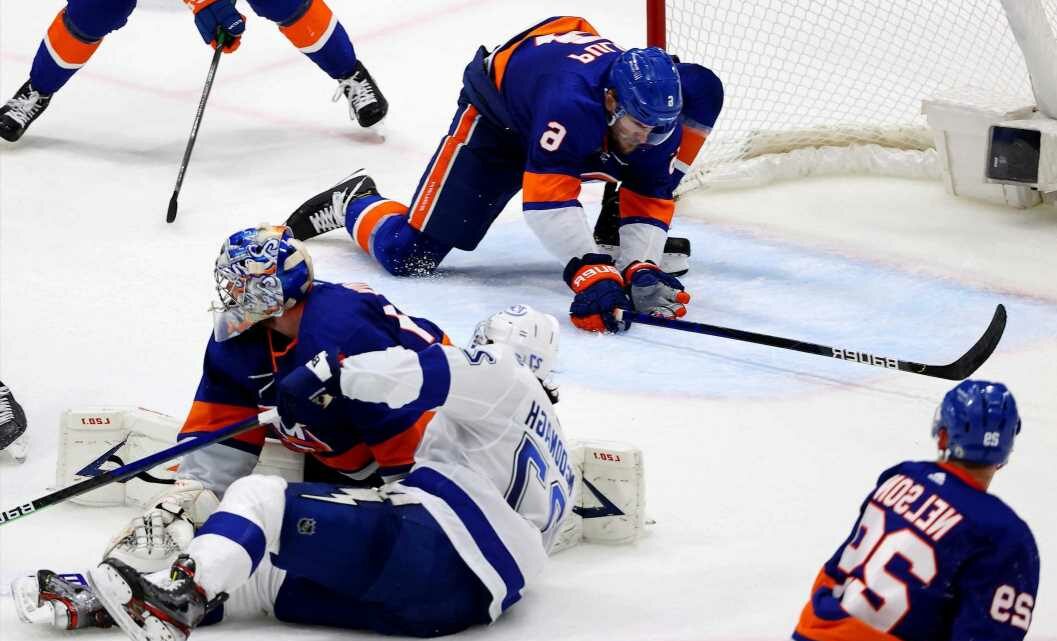 What's on line for Nets, Bucks in pressure-packed Game 7

Sometimes, you wonder how we survived a world before YouTube, before highlights on demand, before video streaming.

In, say, 1950 — or even 2000 — if you happened to see what Ryan Pulock did live Saturday night, then you were lucky. You’d get some replays. You’d marvel at how the Islanders defenseman crawled along the goal line in the final second — literally, with :01 left in regulation — and managed to set aside a brilliant spin-o-rama shot from Tampa’s Ryan McDonagh after McDonagh’s last-ditch shot slithered past Isles goalie Semyon Varlamov.

If you weren’t watching? If you were watching Nets-Bucks Game 7, or “In the Heights” on HBO Max, or if you were at a family barbecue … well, you could read about it. You could hear about it secondhand. Maybe you’d happen to be watching “SportsCenter” when the replay came on there. Dark Ages stuff, right there.

Because I have seen the play almost 50 times by now. I can’t stop. It is one of the most unique plays — factoring its unusualness, and the gravity of the moment, and the astonishing athletic instincts involved — I’ve ever seen.

And as I kept watching, I posed a question to Twitter. Twitter isn’t always the most enjoyable place, but on nights like this it can feel like the world’s biggest — and best — sports bar. I asked: “I’m not sure what the equivalent of it would be in another sport?”

Much to my delight, the candidates came pouring in.

A few hockey fans immediately pointed to ex-Penguin Marc-Andre Fleury, who in Game 7 of the 2009 Stanley Cup Finals made one of the most famous saves in hockey history, somehow stoning Detroit’s Nicklas Lidstrom from point-blank range with 1.5 seconds left to save the Cup for Pittsburgh. The timing puts it in the conversation — but Fleury was paid to stop pucks for a living. Pulock isn’t.

Soccer fans weighed in with a couple of quality comparisons — Abby Wambach’s 2011 header in extra time that forced OT of the U.S.’ World Cup match with Brazil, and Peter Schmeikel of Manchester United impossibly saving a key game against Newcastle late in the 1999 Premiership. Google it (as I had to) if you’ve never seen it.

Still: Wambach simply did her job, however excellently, however timely. Same with Schmeikel. Both were stunning. Pulock’s was different.

It was different than some other excellent nominees, too, starting with Willie Mays’ forever catch of Vic Wertz in the 1954 World Series, and Ron Swoboda’s miracle catch in Game 4 of the ’69 Series (Howie Rose’s personal favorite). Even Andrew Benitendi’s game-ending and game-saving catch against Houston in the 2018 ALCS, and Lorenzo Charles’ dunk-at-the buzzer to win the ’83 NCAA for N.C. State, and LeBron James’ otherworldly block of Andre Igoudala at the end of Game 6 of the ’16 NBA Finals fall under that umbrella: great moments, great plays, but well within the bounds of plausibility.

(Special mention to the Yankees, who somehow Sunday pulled off a second ninth-inning 5-4-3 triple play in the space of 31 days; never seen THAT before.)

That leaves these eight candidates, which I’ll divide into two categories in ascending order for my particular rank of preference.

UNFORGETTABLE, BUT NOT ESPECIALLY UNIQUE

UNFORGETTABLE, AND GOOD LUCK EVER SEEING IT AGAIN

Not bad company for Ryan Pulock.