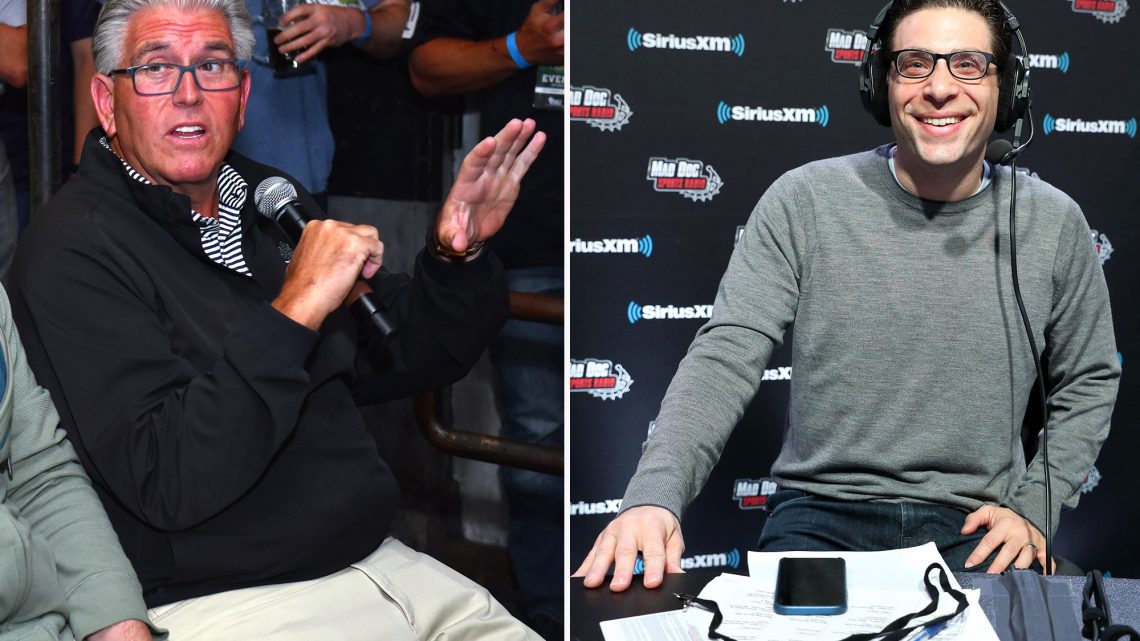 Several scenarios were proposed by WFAN’s VP of programming, Mark Chernoff, including the idea of even pairing Schein with Francesa for a short period before Schein would take over for Francesa when the sports radio icon signs off for good at the station.

Ultimately, Schein will not be joining FAN, as he has opted to stay with SiriusXM, signing a new deal to remain the mid-morning show host on the station that bears the nickname of Francesa’s former partner, Chris Russo, Mad Dog Radio.

Schein will continue hosting “Time To Schein,” his daily program on CBS Sports Network that airs at 6 p.m. FAN was willing to accommodate Schein’s prerequisite to continue to do his TV show, though there was no formal plan on how that would be accomplished since Francesa’s current program runs until 6:30.

Schein also has his CBS Sports Network NFL show. He is not re-signing now with CBS as he is already in the midst of a new TV contract.

The idea of Francesa having a partner may have eventually been a non-starter on both sides, as he and Schein have been solo acts for years.

When Russo fled Francesa a decade ago, Francesa played with the idea of adding a new partner, but never went through with it. If Francesa and Schein had joined forces, it would have been a short run with a finish line set for Schein to take over.

FAN does need to plan for its future because it has no way of knowing what Francesa is thinking, especially since Francesa’s thought process has been erratic. He is often not at the station, preferring to do his show from home, and he has displayed a disregard for anyone else’s situation but his own.

Since his faux four-month retirement, Francesa has threatened to quit and devote all his energy toward his $8.99-per-month app.

He has lamented on-air that doing the radio show and the app might not be compatible. He has given no definitive plan, leaving the station in limbo.

After exiting FAN at the end of 2017, Francesa struggled to find a new lucrative home and, upon his return, he said the best way for him to launch his paid app was by doing his free daily radio show. So FAN executives don’t know what he will do, and Francesa may not either.

Francesa, who turned 65 Wednesday, is being paid by FAN, but has repeatedly said he has declined to sign any contracts with FAN’s parent company, Entercom.

During Francesa’s retirement tour, FAN searched for his replacement and Schein was atop the list, but he declined the job. The station also had talks with ESPN’s Max Kellerman and former NFL QB Chris Simms, among others, to host or be part of a team to take over for Francesa.

While CMB lost the first ratings book to ESPN New York’s “Michael Kay Show” and then had Francesa take his program back, CMB has found a groove, and ratings in the 1-3 p.m. slot, ironically enough, are giving Francesa a needed boost as he tries to avoid losing to Kay in the ratings.

Francesa and Kay are neck and neck after two months, with one month to go in the winter book. The two stations are headed for a potential disagreement about how to tabulate the results from Nielsen audio, but however you look at the final numbers, Kay and Francesa are now consistently staring each other in the face after years in which Francesa was looking way down at ESPN.

Francesa could look to exit before he loses to Kay, which is something FAN executives must consider. It also knows that Joe Benigno has spoken often about retiring soon. Benigno, 65, and Evan Roberts host the mid-morning show.

Even with a full slate of daily hosts that also includes “Boomer & Gio” in the morning and John Jastremski on overnights, Schein was coveted by FAN because growing up in New City, he was groomed on the station.

When you listen to Schein’s program, you can hear some classic Russo and Francesa in his style, combined with the schmoozing sound of Steve Somers.

While the idea of teaming up Francesa and Schein for a short period was broached, there were other possibilities.

Schein, 41, also could have joined FAN in a Mike Tirico-like scenario.

NBC hired Tirico away from ESPN to replace Bob Costas and Al Michaels, even though both legendary broadcasters were still at the network. After Costas relinquished hosting the Olympics, Tirico took over for him. Tirico is set to follow Michaels in the “Sunday Night Football” booth, though Michaels has yet to show an indication he will retire.

Schein, in theory, could have been a Tirico to Francesa’s throne, playing the waiting game for the plush gig, while perhaps doing shows on FAN and Entercom’s Radio.com.

Ultimately, Schein’s situation at SiriusXM and CBS was too good to mess with.

For FAN, it is on to Plan B, whatever that may be, as it strategizes for Francesa’s next departure, still not knowing when or how it will happen.