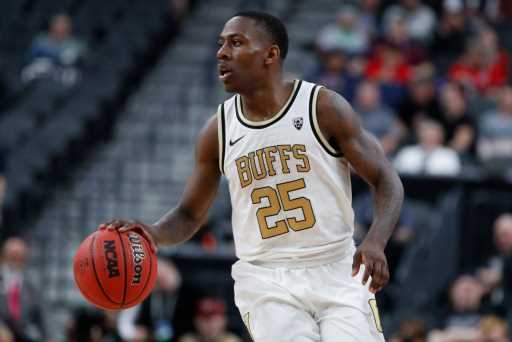 McKinley Wright recalls the March Sadness he felt when the Colorado men’s basketball team’s NCAA Tournament dreams were crushed by the coronavirus.

Now, it’s time for Ralphie to turn the page.

“I can make a promise that we’ll be back there this year,” Wright said. “We’ll be dancing.”

CU held four team workouts prior to Wednesday, Boyle said, yet the first practice in uniform was celebrated as a significant step forward in uncertain times. The men’s basketball team has dealt with two 14-day quarantines for parts of the program in addition to following Boulder County’s strict health orders.

“Every day you step on the floor, it could be your last for the season,” Boyle said. “When the NCAA Tournament got taken away from our guys, it was an eye-opener. It was painful because they had worked so hard to get there. … It’s incumbent on us as coaches and our players to step out on the floor with that in mind. Compete and appreciate every single day.”

Even without Bey back, Boyle is bullish on his team.

“Absolutely, without a doubt, this is an NCAA Tournament team,” he said. “We have to go out and prove that.”

They’ll do it on a revised schedule that includes four fewer nonconference games and a 20-game league slate. Complete schedule details have yet to be released.

“We have the potential to be one of the best teams I’ve been a part of (at CU),” Wright said. “We have so much length and so much depth with this team. Guys who have taken their game to another level.”

“This is one of the better recruiting classes Colorado has ever had, including my class,” Wright said. “They’ve got a lot of pieces and dudes I don’t think will be here for four years. … Some freshmen that are really going to have to play big minutes for us this year.”

Walton, fully recovered from three ACL tears since high school, said he ditched the brace to gain comfort moving laterally and leaping. The former Arvada West star is anticipated to take on a larger role this season after coming off the bench a year ago.

“I’m feeling good,” Walton said. “With those injuries came a lot more attention to details as far as my strength process and my rehab process, making sure that I’m staying on top of them consistently. Coming into this year, I’m not wearing a brace anymore and my legs feel strong.”

Walton also changed his number this season — from 35 to 13 — in remembrance of his aunt, Kristen Walton Maclin, who died in 2017 after being diagnosed with leukemia. Maclin was a former Colorado State volleyball player.

“Her number was 13, so it meant a lot to me and my family to make that switch,” Walton said.

‘Only in Huntly’: Customers roll up sleeves for restaurant after staff family emergency