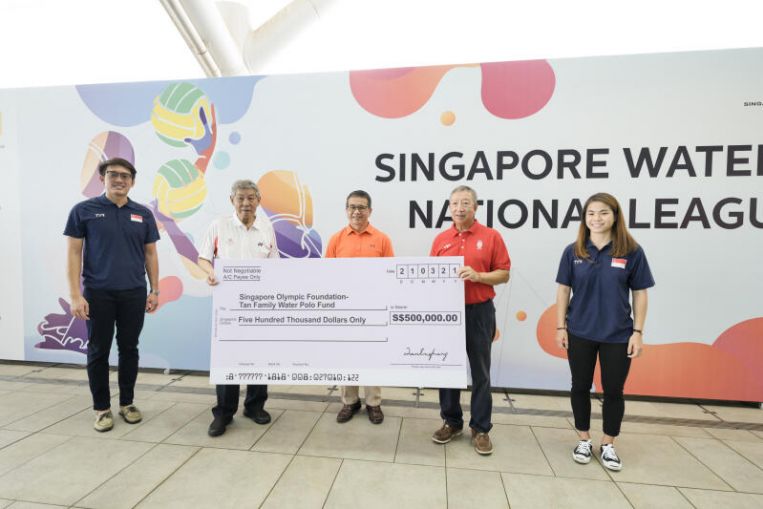 SINGAPORE – Over two decades in the 1950s and 60s, national water polo player Tan Eng Liang played his heart out for his country, before going on to serve the sports community as Singapore Sports Council chairman and vice-president of the Singapore National Olympic Council.

And the 83-year-old’s legacy – as well as that of his family – will continue to live on as the Tan family on Sunday (March 21) donated $500,000 to kick-start a fund to develop water polo here.

The veteran sports administrator’s mission to help the fraternity was prompted by the death of his brothers Eng Bock and Eng Chai last year, as well as his uncle Hwee Hock, who died in January.

Like Tan, all three were national water polo players who represented Singapore in the sport at major events such as the South-east Asian Peninsular (Seap) Games and Asian Games.

Following Eng Bock’s death in November, members of the fraternity had mooted the idea of starting an initiative for the sport.

Wanting to build on the family’s legacy was the driving force behind Tan starting the Singapore Olympic Foundation-Tan Family Water Polo Fund, which was launched at Our Tampines Hub on Sunday in a ceremony attended by Minister for Culture, Community and Youth Edwin Tong.

Tan said: “That became the main objective of wanting to do something for water polo – to continue the work they’d done.

“They’ve done a lot and they were very active in sports. They represented Singapore and in the later part, they were all serving sports in various capacities.

“In order to recognise the work done by the pioneer group of water polo players and swimmers, I felt that the timing was right not just for that, but to try and make a small contribution to the progress of water polo.”

Tan’s donation will put a total of $1 million into the fund’s coffers, as the sum is eligible for the one-for-one matching grant by the Government under the One Team Singapore Fund.

The water polo fund will be administered by the Singapore Olympic Foundation through bursaries, scholarships and various programmes.

Tan recalled how receiving a $200 bursary in university helped him by covering his transport fares and he hopes that the fund can do the same for aspiring water polo players.

As a player, he enjoyed a glittering career where he competed at the 1956 Melbourne Olympics, and won three medals – one bronze and two silver – at the Asian Games and two Seap Games titles.

Witnessing the national water polo team lose their 52-year stranglehold on the SEA Games title at the 2019 Games was heartbreaking for Tan, who hopes that the fund can go some way to bringing the sport back to its glory days.

He said: “If we can do something to grow and inspire young athletes to take up water polo so that they can continue to fly the flag of Singapore, that would be good for water polo.”

The national water polo team captains lauded the Tan family’s contributions to the sport over the years and hailed the new fund as an important step towards developing the sport.

Women’s team captain Koh Ting Ting hopes that a portion of the fund can go towards more overseas sparring or training experiences to raise the level of play.

The 29-year-old said: “In order to bring the whole team to another level, we have to really get exposed to the different styles of play.”

Men’s captain Lee Kai Yang feels that it is important that the community ensures that the donation goes a long way.

Lee, 26, said: “What I would like to see is simply having more people enjoy the sport, be it in the form of participation or spectatorship.”

Tan’s donation is one of the biggest contributions made by an individual in local sports. Other examples of such generosity include Indonesian billionaire Dr Tahir’s donation of $1 million for the Singapore Table Tennis Association’s trust fund, which was set up to encourage local-born national paddlers to pursue their Olympic dreams.