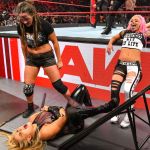 Natalya’s scheduled tag-team match alongside Ronda Rousey against Nia Jax and Tamina was over before it began on Raw.

With the two pairs in the ring and ready to roll, the familiar opening notes of the Riott Squad’s music sounded and the trio made their way down to the ring, with a notable prop in hand.

Ruby Riott led the way, while behind her Liv Morgan and Sarah Logan carried a table as their plans for destruction were made very clear.

Jax and Tamina targeted Rousey while the Riotts laid waste to Natalya, with whom they have been having ongoing issues for several weeks on Raw.

Enter the table. With Riott tangling with Natalya on the ring apron, her associates put it in place and delivered a brutal powerbomb on the Queen of Harts to reduce it to woodchip.

The end result was that Natalya was taken away with an injured shoulder, Ember Moon stepped in to replace her, and the WWE admin team were left with the job of filling out an insurance claim for yet another table.

Raw is repeated on full every Tuesday night on Sky Sports Arena at 9pm.

Creek to raise hell in Adelaide: ‘I’ll go back there with a real chip on my shoulder’
World News