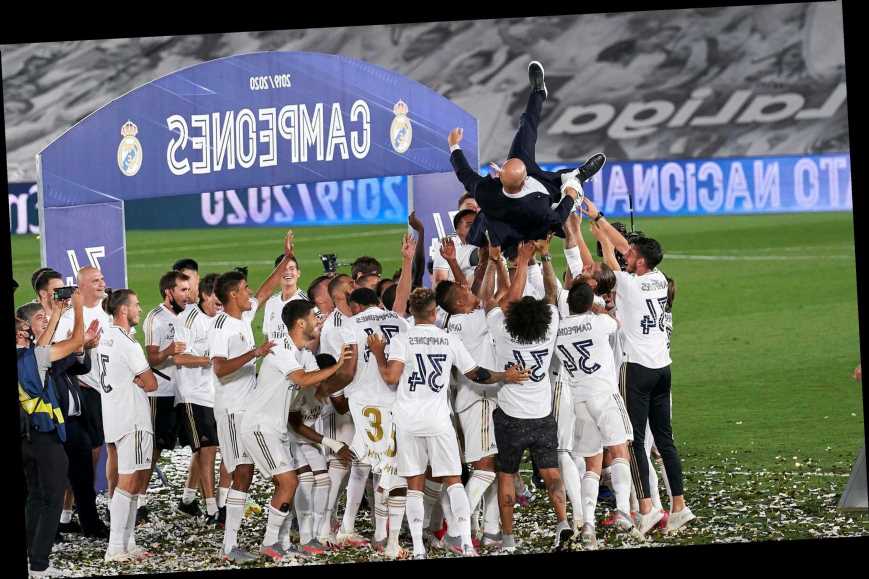 GARETH BALE has shown what he thinks of Zinedine Zidane after the Real Madrid winger watched from the side as his jubilant team-mates threw their boss into the air.

The Los Blancos squad were in a jubilant mood after they clinched a record-extending 34th LaLiga title after beating Villarreal 2-1 on Thursday night.

But Bale – who turned 31 on the day he became a two-time Spanish top-flight champion – wasn't in the best of moods as he failed to come off from the bench for a sixth consecutive match.

And he let it be known as he failed to get involved when his team-mates lofted Zizou in the air as he awkwardly looked on despite being just metres away from the Frenchman.

Despite not being involved in any games of late, the Welsh international has continued to make headlines due to antics from the sidelines.

He caused controversy last week when he was snapped pretending to sleep during the clash against Alaves – before he mocked Zidane in Monday's win over Granada by using a roll of tape as pretend binoculars.

And he continues to display his frustration, with the ex-Tottenham star filmed by Real tentatively celebrating with the rest of the squad as they surrounded the LaLiga trophy.

He was spotted celebrating in a half-hearted fashion as he uncomfortably raised his fists – leaving fans it stitches.

Commenting on the video that was posted by Madrid, one supporter tweeted: "I’m crying look at Gareth Bale."

Another quipped: "When your class group gets an excellent grade for the group project and you know you did nothing."

A third added: "There's no joy in the face of Gareth Bale, he's just standing there giving fake smiles because he has no choice."

One simply stated: "I mean this is heartbreaking right?"

It was reported earlier in the week that such is the desire for Real to get Bale off their books, they are willing to pay him off for his final two years of his contract.