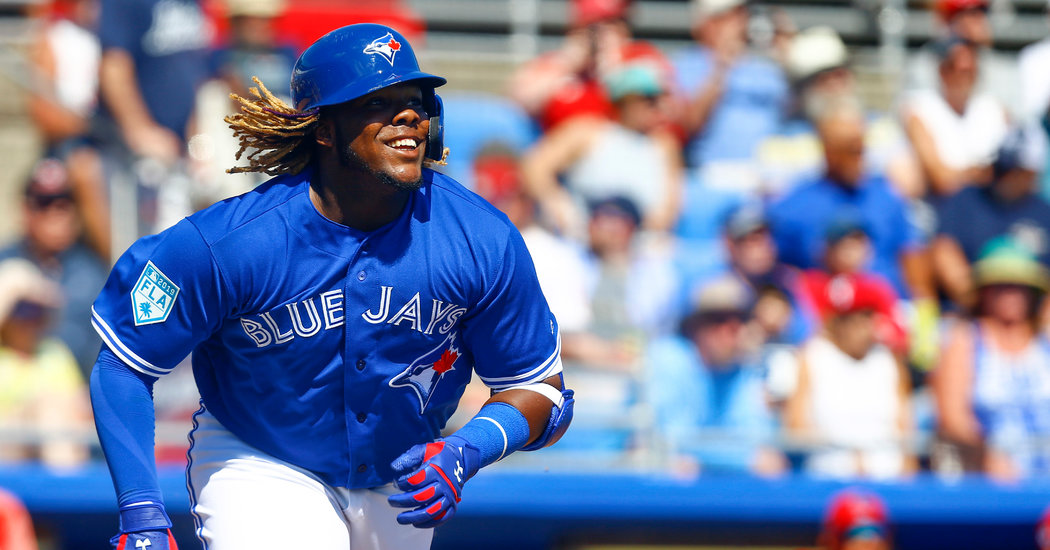 Vladimir Guerrero Jr. and the Quandary of Promoting Young Stars

The Toronto Blue Jays announced on Wednesday that they were finally promoting baseball’s best prospect, Vladimir Guerrero Jr., to the major leagues. That same day, the San Diego Padres’ Chris Paddack threw seven shutout innings in a victory, and the Mets held first place in the National League East, thanks largely to their slugging first baseman, Pete Alonso.

“He’s a born leader,” Mets Manager Mickey Callaway said. “He was made for this.”

Alonso is a rookie who had never appeared in the majors before this season. So is Paddack, a 23-year-old right-hander, as is his Padres teammate, shortstop Fernando Tatis Jr., who is 20. Alonso, 24, had eight home runs entering Friday’s game, with a 1.086 on-base plus slugging percentage; Paddack had a 1.67 E.R.A. in five starts; and Tatis was hitting .299 with six home runs.

Guerrero, 20, might be better than all of them. He has more walks than strikeouts in his minor league career, and hit .381 with 20 homers last season. His father, Vladimir Sr., is in the Hall of Fame. But the Blue Jays did not promote Guerrero last season, and had no plans to put him on the opening day roster this year, either, even before he strained his oblique muscle in spring training.

By delaying his promotion to the majors, the Blue Jays ensured that Guerrero could not accrue a full year of service time for 2019, meaning he will not become a free agent until after the 2025 season, at the earliest. This tactic has been widely employed — notably by the Chicago Cubs with Kris Bryant in 2015 — and it is easy to understand the strategy of sacrificing a few weeks of one season for an extra year of control over a potential superstar.

Then again, the Mets and the Padres are happy with their choices. Both teams hope to contend and have started well, and they will be grateful in September for the games they won in April.

“At the end of the year, you just don’t know what it’s going to come down to,” Alonso said. “This division’s cutthroat. Anything can happen, and you can’t save any bullets. You’ve got to let it all fly.”

Philadelphia Phillies infielder Scott Kingery, one of baseball’s top prospects before last season, made the team out of spring training last March, after signing a six-year, $24 million contract. He said the recent trend of players signing long-term deals before reaching free agency might motivate teams to promote their best players without considering service time.

“Maybe they’re thinking, ‘If we’re going to sign them to a contract anyways, we might as well get ’em up here to help the team,’ ” Kingery, 24, said, adding that every team weighed different factors. “It seems like every team should do that, right? It should be that every team is trying to win as many games as possible, and to do that, you want to have your best 25 guys.”

That was Brodie Van Wagenen’s theory when he left a lucrative job as a player agent to become the Mets’ general manager last fall. Van Wagenen had made a career of advocating for players, and sought assurances from the Wilpons, the team’s owners, that they would not hold back their best.

“I took the job with a pretty significant risk of my own professional stature, and the communication I had with the ownership group on the front end was, ‘I’m interested in this job if you’re committed to winning — and if we’re committed to winning, we’ve got to put the best 25 guys on the field when they prove to use they’re the 25 best guys,’ ” Van Wagenen said. “I was consistent with that publicly and privately throughout the off-season, and I met Pete, spent time with Pete, outlined the opportunity for Pete and gave him a platform to seize that.” 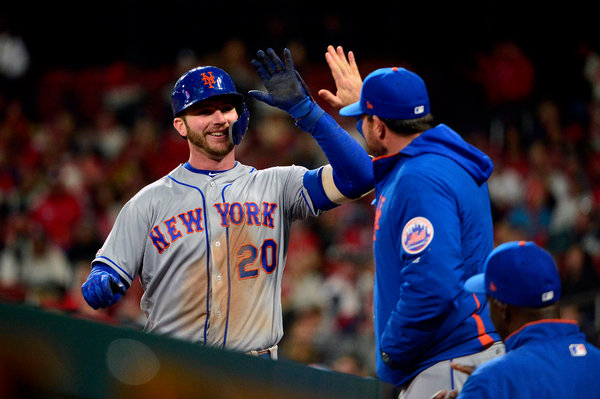 Alonso, who was not called up last September despite hitting 36 home runs in the minors, took advantage of his chance by hitting .352 in spring training. He has been indispensable ever since, but inevitably, there will be struggles. Van Wagenen pointed out that many top young players, including the Mets’ Michael Conforto and Brandon Nimmo, needed a return to the minors after their initial promotions.

“Sometimes, we as an industry overvalue the potential for extra years of service dictated by the first 20 days,” Van Wagenen said. “In reality, it might be the next 20 days, or the next 120 days, or a year and a half from now, that ultimately will determine when a guy gets to free agency.”

What if Alonso — or another star rookie — does stay in the majors every day for six consecutive years? Van Wagenen said he would welcome that problem.

“That’s a good thing for us,” he said. “And if we can’t win in a six-year window of players going wire to wire, then that’s on me.”

The Royals Are Still Running

The Kansas City Royals had their two fastest runners on the corners in the second inning against Tampa Bay on Wednesday. With Billy Hamilton at first base and Terrance Gore at third, the Rays’ Blake Snell made a pickoff throw to first as Hamilton took off for second. Gore then streaked for home, and the Rays threw there and caught him in a rundown. By then, Hamilton had rounded second — and the Rays caught him, too, for an unusual double play.

The rebuilding Royals are in last place in the American League Central, but they won that game and increased their total to 28 stolen bases, the most in the majors entering Friday’s games. Their speedsters have the freedom to run, which stands out in an age when teams tend to be risk-averse.

“I’m just glad to be on a team that allows us to run and gives us opportunities to show our ability,” said Gore, who had 31 career steals and 28 career at-bats through Thursday. “That was pretty much what they told us: ‘We want to play defense, we want to play the game right, we want to run the bases hard — and we want to the lead the league, literally, in stolen bases.’ ”

The Royals also relied on power relievers in those seasons, a philosophy many teams have tried to copy. But their daring approach on the bases has not caught on: The 2018 and 2019 seasons have featured the fewest steals a game (.51) in the majors since 1972.

“I know we like it, that’s all that really matters,” Manager Ned Yost said. “It’s a lot funner than sitting back waiting for somebody to hit a three-run homer and striking out 10 times a game. We like that action, we like to get on base, we like to create havoc on the basepaths. We like to kind of push the boundaries when we’re playing.”

The Royals’ Whit Merrifield led the majors in steals last season with 45, the lowest major-league-leading total since 1963. While he is admittedly not as fast as Hamilton or Gore — “They can outrun the baseball most of the time,” Merrifield said — he reaches base more often, studies pitchers’ moves and takes advantage whenever possible.

Merrifield also led the majors last season in another of baseball’s bedrock counting statistics: Hits, with 192. His franchise-best 31-game hitting streak ended this month after a bunt single that broke a record that George Brett held.

“That was the part of my game in high school and early on in college,” said Merrifield, who attended South Carolina and singled in the clinching run in the 2010 College World Series. “That’s how I played, that’s how I got in the lineup: I at least tried once a game to bunt for a hit. As I got older, I started to be able to drive the ball, and also word got around that I could bunt, third basemen became better, and there was less opportunity to do it. The fact that record-breaking hit came on a bunt was kind of full circle, so it was cool.”

Wisdom in a Rut

Cody Allen has earned more than 150 saves and $30 million playing baseball. He has pitched in the postseason four times for the Cleveland Indians and fired six shutout innings in the 2016 World Series.

But Allen is struggling now for the Los Angeles Angels, allowing runs in four consecutive games in a recent stretch and losing his job as closer, at least temporarily. When asked about it on Wednesday by reporters covering the team, Allen gave a timeless comment that should resonate with almost anyone who has played baseball.

If you’ve ever felt your knees buckle on a curveball, or had your pride wounded by a barrage of line drives off your pitches, Cody Allen speaks for you:

“This game is humbling,” he said. “It’s either hard or really hard.”

The Truth About Melania Trump's Model Life & Relationship With Fame